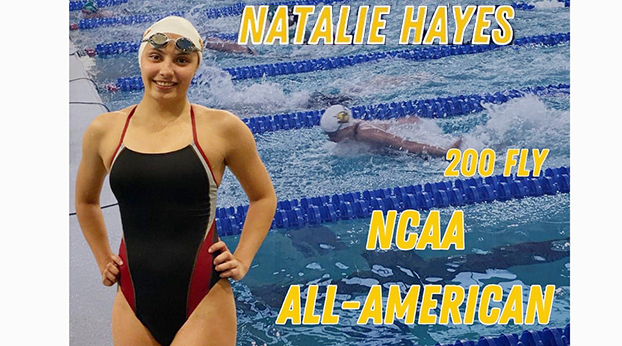 Former Boyle County swimmer Natalie Hayes is making her mark at Emmanuel College in Georgia, where she was the first female swimmer to earn all-America honors, and only the second female in school history to do so.

Former Boyle County swimmer Natalie Hayes is making her mark at Emmanuel College in Georgia, where she was the first female swimmer to earn all-America honors, and only the second female in school history to do so.

Becoming the first female swimmer ever at Division II Emmanuel College to earn an all-American honor — and only the second female athlete to do so in any sport at the Georgia school — was a huge honor for former Boyle County swimmer Natalie Hayes.

“I was actually quite surprised to even qualify for nationals this year. It had been a goal since I came to college,” Hayes, a junior, said. “But there was a lot of stuff in the season that did not have me with a good expectation. I had no idea at conference my swim would get me to nationals and then no expectation to be an All-American. I am absolutely blessed.”

She finished the 200-yard butterfly in 2 minutes, 4 seconds at the conference meet — breaking her own conference record — and then cut that time to 2:03.26 at nationals — a new school record.

Her journey to All-American honors is one that included a lot of adversity, including having COVID-19 last semester and not being able to swim.

“I have a very severe case of asthma and I could not finish a practice the rest of the semester after I got COVID because of the physical toll it took,” Hayes said.

“That’s why I was not even remotely expecting to make nationals or go as fast as I did at conference. I worked over the winter break and did as much as I could to improve my lung capacity and it worked out.”

Battling COVID was nothing compared to some of the obstacles she had to overcome during her high school career that included a couple of “very serious concussions” — one from a fall while on a treadmill and another after a car accident. She also ran into a garage door as it was coming down and had a teammate swim into her in the pool.

“The first concussion made me more susceptible to concussions in the future,” Hayes said. “I wore sunglasses for almost two years after the first concussion and then getting hurt again. I am very healthy now and I think one thing that has made me successful at college is that I am just grateful for the opportunity to compete and swim.

“I was successful as a young swimmer and then faced the reality I might not be able to swim again and lead a student-athlete lifestyle. It was kind of scary and a very sad thought. I don’t take these opportunities for granted to use my talent and ability. It’s a blessing to train.”

Hayes was conference champion in the 200 butterfly as a freshman and sophomore before emerging to All-American status this year by making the Division II final 16. She was a high school regional champion and also swam for Lakeside Swim Club out of Louisville. She seemed destined for a sparkling collegiate career before the concussions/injuries nearly derailed her swimming.

“It is kind of a crazy story and a pretty curvy road to get to this point which just makes it sweeter to do what I did,” Hayes said.

Her college teammates know some of her story because her hearing was damaged. She wears hearing aids and cannot always keep up with full conversations with her friends/teammates.

“Obviously at practice I don’t wear them in the water but for the most part I live life in a way that my teammates don’t see real evidence of what I went through,” Hayes said.

She tried other sports when she was younger. Her parents encouraged her to participate in soccer, gymnastics and baseball. “I didn’t do softball. I did baseball with the boys,” she laughed and said.

Through middle school she ran cross country but swimming was always her “love” and when her parents decided it was too hard to keep doing multiple sports making swimming her sole sport was an easy choice.

“I have always been happiest when I am swimming,” Hayes, a pre-med major, said. “It was always a dream of mine to get to this point. Swimming at the NCAA (Championships) was a dream and having that become a reality was great.”

Hayes knows some may look at her story and look at all she had to overcome. She has a different take.

“I have only done what I have because of God’s faithfulness,” she said. “What has changed for me is that my faith is deeper and my relationship with the Lord is deeper. All of this is a result of that. He has given me this opportunity and I want to give credit where credit is due. I see my success as God saying you are doing a good job and this is your award for that.”