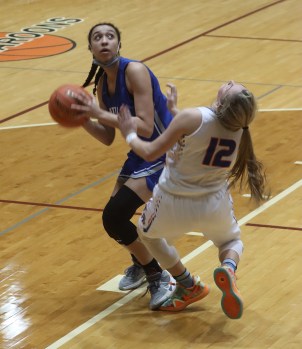 Desiree Tandy of Danville collides with Southwestern’s Alexa Smiddy as she looks for a shot during the second quarter Friday. - Photo by Mike Marsee 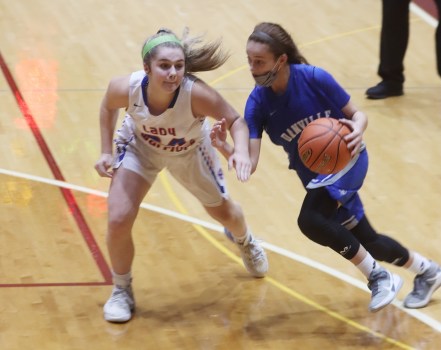 Ahyana Burnett of Danville drives toward the basket against Southwestern’s Kinsley Molden during the third quarter Friday. - Photo by Mike Marsee 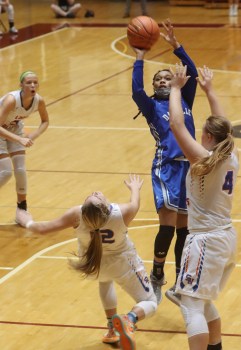 Love Mays of Danville collides with Southwestern’s Alexa Smiddy as she puts up a shot during the third quarter Friday. - Photo by Mike Marsee 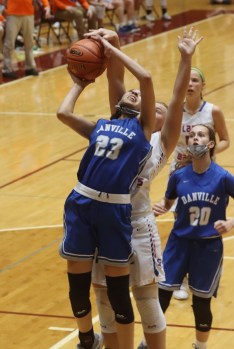 Desiree Tandy of Danville tries to get off a shot as Southwestern’s Marissa Loveless blocks the attempt during the third quarter Friday. - Photo by Mike Marsee 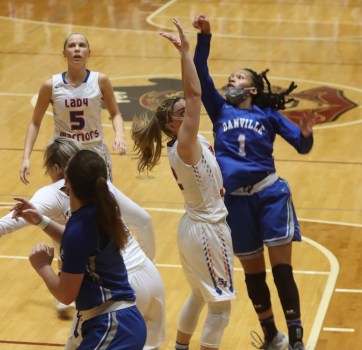 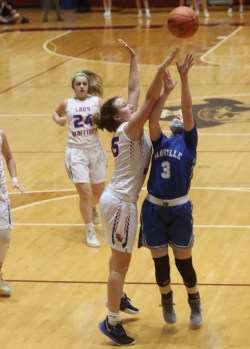 Jenna Akers, right, of Danville and Payton Acey of Southwestern reach for a rebound during the third quarter Friday. - Photo by Mike Marsee 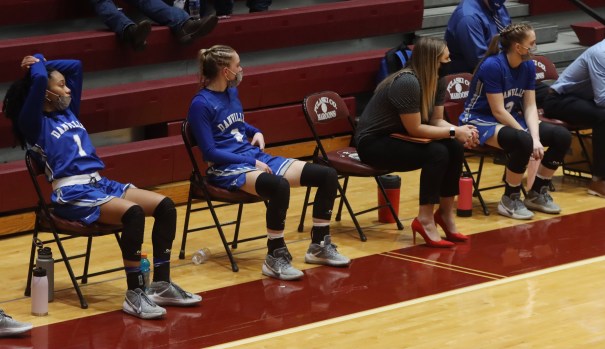 SOMERSET — The Danville girls were trying to climb one rung higher, but Southwestern shot them down.

The Lady Admirals were stopped for a third consecutive year in the regional semifinals, this time by an opponent with superior firepower.

Three-point shooting has been a hallmark of Southwestern’s success, and the Lady Warriors were potent from the perimeter Friday night in a 65-54 victory in the girls’ 12th Region Tournament semifinal at Pulaski County.

Southwestern sank 12 of 26 shots from behind the line, including a barrage of 3s in the third quarter that allowed it to take control of the game.

“If they shoot the ball like that they can win it all,” Danville coach Judie Mason said. “We knew that’s what we had to stop, and they beat us at their game.”

“They hit some contested 3s, and we didn’t play our defense the way we were supposed to,” she said. “They’ve got five good guards that can get out and penetrate and beat you off the dribble.”

Southwestern opened a double-digit lead late in the third quarter and withstood a Danville rally to send the Lady Admirals packing and earn a spot in the 3 p.m. Sunday regional final against Mercer County.

Danville (16-6), which started the season with six seniors, took aim at a regional title after losing to Casey County in the semifinals in each of the past two seasons.

In an attempt to protect the team during the COVID-19 pandemic this season, Mason dictated that the Lady Admirals make more sacrifices than many other teams made. She urged her players to refrain from associating with people outside their households, and the girls played all but one game wearing face masks.

It was all done with the goal of ensuring Danville had a chance to win its second regional championship.

Danville didn’t reach its goal, but Mason said she was glad the seniors got to enjoy a senior season that included the team’s second consecutive 45th District title and its ninth straight trip to the All “A” Classic.

It ended Friday after Southwestern hit five of seven 3-point shots in the third quarter. Kinsley Molden sank three of those shots for the Lady Warriors, who turned a 28-25 halftime advantage into a 47-36 lead just before the end of the period.

Southwestern, which was 7 for 11 from 3-point range in the second half.

In fact, the Lady Admirals shot 50 percent from the field and were 4 for 8 from 3-point range, but they played from behind for most of the game.

Desiree Tandy led Danville with 18 points, including 13 in the second half. Lara Akers followed with 10 points, and Camryn Preston added eight.

Five players had 3-point goals and four players scored in double figures for Southwestern, led by Kaylee Young with 16 points.

Danville trailed 47-38 when the third quarter ended, but Jenna Akers’ layup just before the buzzer launched a 5-0 run before the Lady Warriors answered with six straight to push their lead to 56-43 with 4:46 remaining. The Lady Admirals made one last run, scoring nine straight points and pulling to within 56-52 on a 3-pointer by Lara Akers with 3:25 to play.

Danville didn’t score again until the closing seconds, and it was unable to rebound the one free throw Southwestern missed or its own missed shots down the stretch.

“We made a run at the end, and then we just gave up a couple of rebounds,” Mason said.

And talented players will return for Danville, including four of the eight players who got most of the minutes in the regional.

“We’ve got a future. This is not the end,” Mason said. “Right now it’s hard, but I’m looking forward to getting back in the gym and being able to have a summer.”

The Southwestern-Mercer title game will be a rematch of a Feb. 27 game the Lady Warriors won 81-73 at Mercer.

Two of the region’s top scorers put up big numbers in that game: Timberlynn Yeast scored 33 points for Mercer, and Alexa Smiddy had 28 for Southwestern, which shot 55 percent.

Mercer (12-8) has lost its last three games against Southwestern, but the Titans have beaten the Lady Warriors in six consecutive regional tournament meetings dating to 2008. They met in the title game in 2015 at Pulaski, where Mercer won 63-52 on its way to the first of four straight regional championships.
Mercer has five titles in all; Southwestern won its only regional title in 2019.