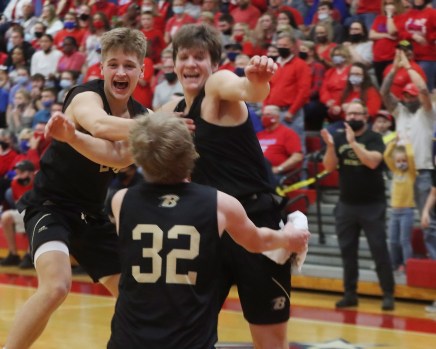 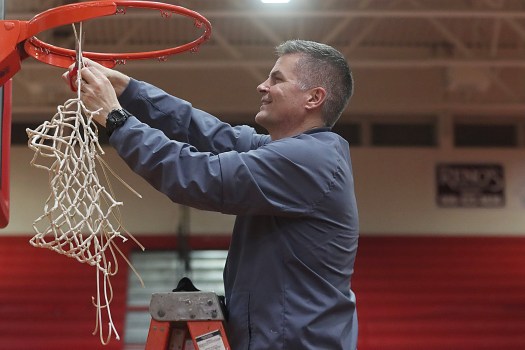 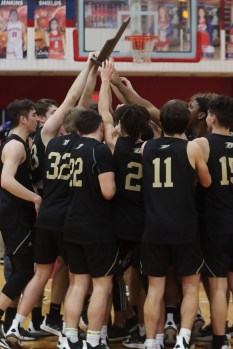 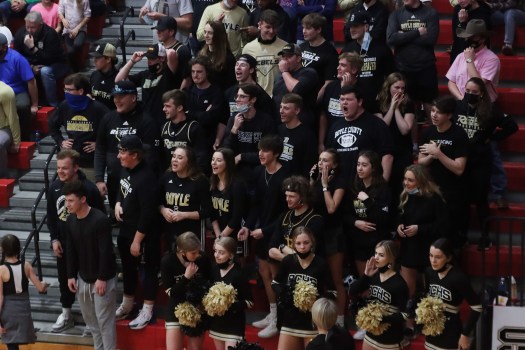 Boyle County students cheer for their team during the third quarter Saturday. - Photo by Mike Marsee 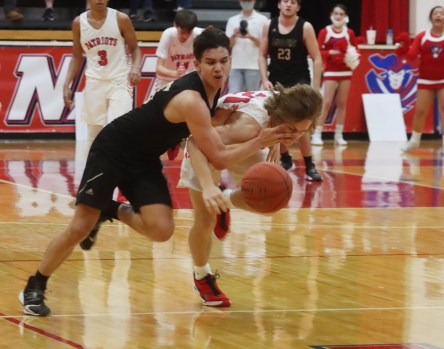 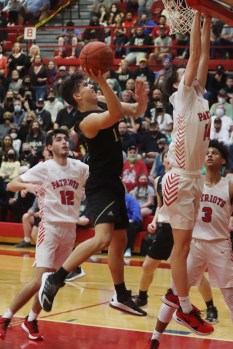 Owen Barnes of Boyle County goes up for a shot after Lincoln County’s Colton Ralston passes by during the fourth quarter Saturday. - Photo by Mike Marsee

STANFORD — Other teams may have been the talk of the preseason, but the season belonged to Boyle County.

The Rebels emerged as the best team in the region in the first half of the season and were still in that position Saturday night when they earned a spot in the state tournament.

Boyle cemented its position with a 54-48 victory over Lincoln County, defeating its district rival for the third time this season to win the boys 12th Region Tournament.

“I’m still trying to believe that we just did that,” Boyle guard Noah Imfeld said. “We’ve been working for this forever.”

Boyle led for most of the final three periods at Lincoln to capture its fifth regional title and its first since 2015.

As he watched his players celebrate all around him, Boyle coach Dennie Webb said he was thrilled to see them rewarded for their hard work.

“I can’t tell you how much I’m happy for the kids,” Webb said. “Yeah, of course I’m enjoying it, but it’s for them. I just know what they’ve done and how they’ve come together and just done everything they could to do what they want to do.”

The Rebels were nobody’s favorites at the start of the season, but they saw the possibility for something special.

“I think we did,” said Webb, an assistant coach on the 2015 Boyle team who won his first regional title as a head coach in his second season. “We talked about it at the beginning of the year. We laid it out: ‘Here’s what we think we can do,’ … and we just kind of kept building.”

The start of the season was pushed back to early January after a spike in COVID-19 cases across Kentucky in the fall, and Boyle was forced to wait another week to begin due to concerns about a rise in the number of local infections. However, the Rebels got rolling right away by winning their first six games and 13 of their first 14.

There were a few more losses late in the season, including one to Lincoln in the 45th District final. But by then the Rebels knew they could contend for the regional title.

“At the start of the season we knew we had a good team, but we just had to work for it,” Boyle forward Luke Sheperson said. “We pushed through, and we’re going to Rupp.”

Boyle will play at Rupp Arena for the first time since its run to the semifinals of the Boys Sweet Sixteen six years ago. The Rebels will face 15th Region champion Paintsville (15-8) in a first-round game at 5 p.m. Thursday in Lexington.

“We’ve got to figure out who we play and what defense they run, but our motto will still be, ‘One More,’ and we’ll take it all the way to state,” Sheperson said.

Boyle (21-4) punched its ticket to state in a game played before a larger, louder crowd than had been seen in any of the six previous regional games and that included cheering sections of mostly maskless students from both schools.

Webb said execution, communication and the desire to work hard on defense were the key to a better defensive effort than Boyle had in its 62-57 loss to Lincoln 10 days earlier in the district final.

“The last few weeks we kind of got away from having that defensive edge, and after losing to them in the district we really focused on that,” he said. “They’re so hard to guard … and we challenged our kids, and they got down and got it done.”

Boyle pressured the ball from the beginning and used their physicality inside, challenging the Patriots’ drives to the basket time after time.

“We had ball pressure all night tonight. The other night we were playing off the ball, and we didn’t cut off drives, but today we said we were going to jump to the ball, get every ball, get the 50-50 balls, everything,” Sheperson said.

“They hit some shots, but we played solid defense basically all 32 minutes,” Imfeld added.

Lincoln coach Jeff Jackson said the Patriots missed too many shots from the perimeter and too many near the basket.

“I thought our kids played really, really hard, and I’m proud of the effort they gave. We’ve got to play a little smarter, a little more under control offensively,” Jackson said.

Neither team shot well in the first half — Boyle was 7 for 25, Lincoln was 7 for 24 — but the Rebels hit six of nine shots in the third quarter to take control of the game.

A 3-pointer by Imfeld, who led all scorers with 20 points, gave Boyle the lead for good at 35-33 with 1:34 left in the period. Imfeld converted a three-point play on the Rebels’ next trip, and Jagger Gillis closed the quarter with a 3 that made it 41-33.

Boyle took its largest lead at 45-35 two minutes into the fourth quarter on consecutive baskets by Owen Barnes and Hagan Webb. It was still a nine-point game with 2:20 left.

Two baskets by Jaxon Smith and a 3 from Tramane Alcorn for a 7-2 run pulled Lincoln within 52-48 with 17 seconds left, but the Patriots could get no closer.

Gillis scored 14 points for the Rebels, while Sheperson had nine points and blocked four shots.

“Given them credit,” Jackson said. “I have a lot of respect for (Webb) and how he does things, and I know they’ll go and represent the 12th Region the right way.”

Lincoln had been on a roll of its own with wins in 11 of its previous 12 games after a 5-5 start.

“We weren’t picked very high to start, and we got on a little bit of a run … and we had a chance to win a region championship on our floor,” Jackson said. “I’m really, really proud of our kids for how they progressed as the season went on, for how they handled the COVID, how they handled the snow and ice when we were off for a while. They showed some resiliency and toughness, and a lot of togetherness.”

This hasn’t been an easy season for any team, and Boyle had to deal with some of the same issues and inconveniences other teams faced along the way, but those were forgotten in the midst of the Rebels’ celebration.

“That makes it pretty special,” the Boyle coach said. “We’ve had some headaches, but oh, yeah, it’s worth it.”