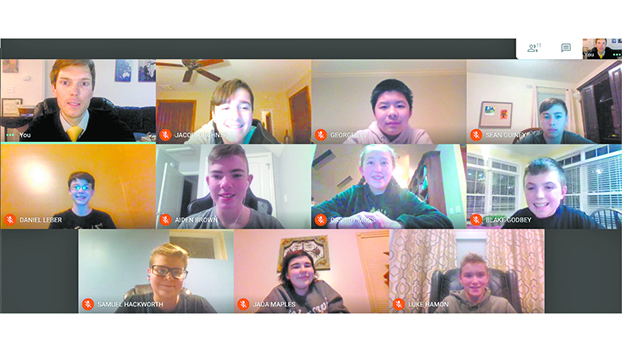 A screenshot of a Google Meet with some academic team members after this year’s region competition. - Photo submitted

On the last Saturday of January, the Boyle County Middle School academic team won the regional championship for the first time since 2005, making it the third time the school had made the accomplishment. Several students placed in competitive events as well on the state level.

“One of the things I tell the kids is you’ve got to practice like you play,” said Tyler Murphy, who is a Boyle County High School teacher and also the BCMS academic team coach.

The team’s Future Problem Solving team also placed second in the State Governor’s Cup in mid-March, and Campbell Johnson, an eighth grader, placed fifth in the state in Written Composition.

Murphy said the students’ practice and competitions have taken place virtually this year due to COVID-19, but he hopes in the coming months they’ll be able to celebrate and receive their awards in person.

“For me, my main goal is to give us an opportunity to publicly acknowledge and recognize their accomplishments,” he said.

Because the FPS team placed in the State Governor’s Cup, they’ll be moving on to the international competition. There’s not a national competition for FPS. Murphy said the state competition was canceled last year, so he and the students were glad they were able to compete this year, albeit virtually, and that they placed. The topic in the international competition will be neurotechnology. With FPS, students are given a topic and a hypothetical future scenario and are given two hours to figure out potential challenges, an underlying issue and potential solutions. From there, they narrow it down. Booklets where the students compile information on their findings and thought processes in their groups are then ranked and judged. 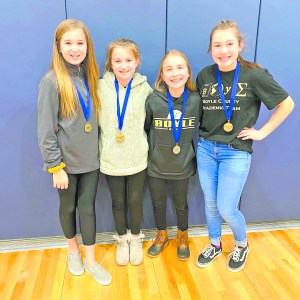 Academic team also has a quick recall team, which is like trivia, written composition, exams and other events.

“I try to place students in a component or an event that plays to their strengths,” Murphy said.

“I’m really pleased that not only did they get a chance to go to state this year, but they did so well,” Murphy said.

Emery Herron, one of the eighth graders on the FPS team, said the team “had a really good connection. I feel like we worked really well, and all of our hard work paid off.”

She said before competitions, the team texts each other in a group message to gear each other up.

“We do text a lot in the group chat, and we get really excited about it,” another eighth grader on the FPS team, Maggie Gnann, said.

Aleah Stigall, a seventh grader on the FPS team, said they have a lot of inside jokes, which helps them give something to laugh about and ease nerves and tension with during competitions, and since she and Kate Briese are seventh graders on the FPS team, they often quiz each other and have gained a good friendship. When the team has conflicts, which she said they rarely do because they work well as a team, they often either laugh it off or take votes.

“Sometimes we take a group vote if we’re trying to figure out what our best solution is to use for our action plan,” Stigall said.

Briese said since she and Stigall are a little younger and have a bit less experience than Herron and Gnann, they can be more nervous leading up to competitions, so they rely on each other for support.

Brown, an eighth grader, and Jacob Kirchner, a seventh grader, are on the quick recall team. Brown’s strength is in math, as he got 15th place in the state, and Kirchner was language arts district and region champion. Kirchner is also quick recall captain.

“I think we’ve done a good job of playing to each other’s strengths and working together, and overall, I’m happy with how we did this year,” Kirchner said.

Johnson, who placed fifth in written composition at state and was district and region champion for written composition, said she likes that event because she does better at writing than in math or language arts quick recall, and since the event is a solo activity, when she answers prompts she works through them herself. For the state competition, she wrote about child privacy laws on social media. She had to craft an argument, so she took the side that children could work around them, posing an issue.

“It was exciting to place” in written composition, she said.