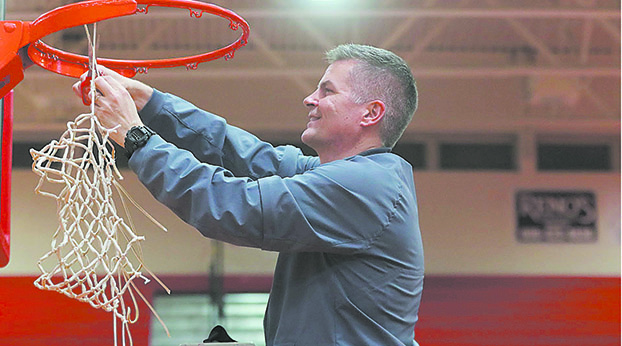 Boyle County coach Dennie Webb cuts down the net following the Rebels’ victory over Lincoln County on Saturday. He will make his first trip to the state tournament as head coach of the Rebels Thursday. - Photo by Mike Marsee

Less than 24 hours after winning the regional champion, Boyle County was playing again. Wiffle ball, that is.

The Rebels took some time to unwind Sunday as they met to discuss their upcoming trip to the Boys Sweet Sixteen, but today it’s back to work.

There are just four days between Boyle’s regional championship victory and its first-round game at the state tournament, and the team used one of them to celebrate its achievement.

“We met and talked about the week. We played Wiffle ball and ate some pizza and celebrated a little bit,” Boyle coach Dennie Webb said Sunday. “We had a good day with them, but we told them, ‘This is our last day of celebrating or feeling good. Monday we’re going back to work.’”

That means preparing for Paintsville, the team Boyle will face at 5 p.m. Thursday at Rupp Arena in Lexington.

Webb and his staff began watching film and gathering information on the Tigers on Sunday, learning all they can about a team that has made a habit of winning close games.

None were closer than a win Saturday over crosstown rival Johnson Central in the 15th Region final that gave Paintsville its ninth regional title. The Tigers won 48-46 in overtime when Jaxon Watts scored the only points of the fifth period on a putback at the buzzer — his third attempt after the original missed shot.

“They’ve won several close games, which tells me they’re pretty composed and able to grind some things out,” Webb said.

Three of Paintsville’s five starters are 6-3 or taller, giving the Tigers a size advantage over Boyle.

“They’ve got pretty solid size across the board, so that’ll be an issue for us,” Webb said.

“He’s their shot-taker, their leading scorer and the guy that I’m assuming makes them go,” Webb said. “He’s pretty smooth, he can shoot it and he’s got some length.”

Connor Fugate leads the team with 6.5 rebounds per game, and Colby Fugate averages 5.6 boards. Both players also were part of the Paintsville football team that won the Class 1A championship last fall.

That gives the Tigers something in common with Boyle, which has two starters who were part of a football team that won the Class 4A championship.

Paintsville is making its first trip to the Sweet Sixteen since 2008, when its current coach, Landon Slone, was the point guard on a team that won a first-round game over Jeffersontown before losing to eventual runner-up Holmes.

Boyle won its fifth regional title and earned its first trip to the Sweet Sixteen since 2015, when the Rebels made a memorable run to the semifinals. They defeated Lexington Catholic and Ballard before falling to Bowling Green.

Three of the players from the 2015 team — Chapman Bean, Jeremiah Bell and Hagen Tyler — visited the current team at their Saturday morning shootaround hours before the Rebels faced Lincoln County for the regional title and were on hand at the game that night to encourage the players.

“We just asked them to come in and talk about what it means to win that, and a little bit about what it takes and what to expect,” Webb said. “It was a lot of fun having them back, and I think our guys really enjoyed that. They know how special it is to win that game and to get to play at Rupp.”

He said the 2015 players’ visit was followed by what was probably the Rebels’ best walk-through of the season.

“They were idols to those kids growing up,” Webb said.

“I wanted it so bad for our kids, because I know what it’s like and how much fun it is and what it means to them,” he said.

Webb, who graduated from West Carter in 1996 and played for two seasons at Morehead State University, is in his second season as Boyle’s head coach. However, this is his 16th season in the program, where he served as an assistant under coaches Ronnie Bottoms and Steve Adams.

“It’s just a game. You’re just playing ball,” he said. “Yeah, you’re playing on the big stage for all these Kentucky kids. If you’re a basketball fan and grow up here, you dream of playing there.

“But it’s icing on the cake, and we’re going to try to get us a few wins over there and try to make some noise like we did in 2015.”