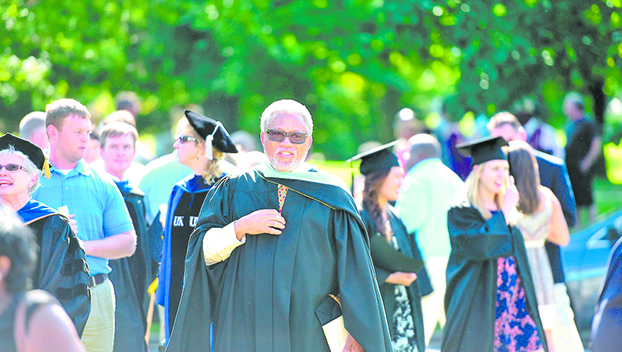 The new J.H. and Artie Atkins Scholars Research Program at Centre College will soon be launched, thanks to a generous grant of $75,000 over three years from the James Graham Brown Foundation of Louisville.

With a preference for first-generation and historically underrepresented students, Atkins Scholars will prepare for a lifetime of active leadership that contributes to an equitable society and a more just, inclusive and diverse world. It will also prepare scholars to confidently integrate inclusion and equity practices in future professional and academic endeavors.

“This exciting, new program is another example of Centre’s commitment to the work of racial equity and anti-racism, and we are grateful to the Brown Foundation for helping seed this effort” said Centre President Milton Moreland.

“Given the program’s unique structure,” he added, “Atkins Scholars will work closely with a faculty mentor to undertake new research and scholarship that engages leadership initiatives for a more inclusive and equitable society through the lens of a particular academic discipline.”

Because their research will be shared campus wide, the Atkins Scholars Program will also contribute a new, student-driven research and dissemination component to campus discussions on diversity and inclusion, empowering students from all academic disciplines to strengthen their knowledge. In turn, this will increase Centre’s contributions more effectively in the region, the state and across the nation.

Named after J.H. Atkins and his wife, Artie, the program recognizes a longtime educator and former Centre faculty member, whose 14-year career as assistant vice president and associate professor of education began in 2001. Besides training a generation of teachers, Atkins was the first to lead the College’s concerted focus on diversity through his involvement with the Posse Scholars Program, the Diversity and Community Committee and the Diversity Student Union.

Atkins began his career as a teacher at the local Danville Bate Middle School, served as the principal of Toliver Elementary School and held other key roles in Boyle and Fayette counties. A community leader as well, Atkins has been active in Citizens Concerned for Human Relations and is serving his fifth consecutive term on the Danville City Commission, earning the highest number of votes in the recent 2020 election.

In an article at the time of his retirement in 2015, Atkins was quoted as saying, “My goal has been to provide leadership opportunities and to be a role model by promoting fairness.” This new program will assure his legacy is carried forward.

J.H. insists that he and Artie have always been a great team and that Artie has been his constant partner in efforts at both Centre and in the community.

Artie played a formal role for many years as a technology teacher in the Whitney Young Scholars Program and also acted as a chaperone out-of-town and educational trips. She has also helped host and mentor students in the Diversity Student Union (DSU) and the Posse Scholars Program, as well as international students, acting as a surrogate family for several, such as Princess Allotey, a Lincoln Scholar from Ghana. Artie also traveled internationally with J.H. on study abroad programs, including two trips to Ghana and also to Merida, Mexico. She is also famous for her home-away-from-home Thanksgiving dinner for students.

The program will be administered by Centre’s Office of Diversity Initiatives (ODI) and will initially fund 10 Atkins Scholars per year with $25,000 from the grant. Part of the funding can be used for travel and to attend meetings and events. In addition, faculty mentors will receive funding through the grant to guide students through the research process.

“Atkins Scholars will be pioneers in helping strengthen cultural competency on our campus across a broad spectrum of lenses,” said Abrams. “Their research, fueled by a passion for a more just and equitable world, will inspire us all to continue the important legacy first established by J.H.”

As part of the grant, Centre has committed to raise $50,000 per year for the next 10 years to establish a half-million dollar endowment for the Office of Diversity and Inclusion (ODI) and related equity initiatives.

Kelly Knetsche, vice president for development and alumni engagement, is confident that the fundraising effort will be successful.

“Many alumni are eager to help fund these equity initiatives and continue this important work in our community,” she said. “I am grateful to the Brown Foundation for their support of this program and the transformative impact it will have on our campus.”

Vaccinations may come to Kentucky state prisons next week