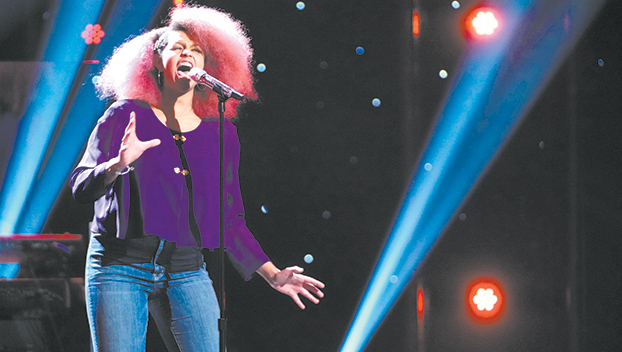 Alyssa Wray sings “I’m Here” from the musical “The Color Purple” before she makes it into the top 24 contestants on American Idol. - ABC/Eric McCandless

Fans of ABC’s American Idol and supporters of contestant Alyssa Wray from Perryville will be able to vote for their favorite contestants on April 4-5 for the first time this season after All Star Duets and Solo Rounds air on those days.

Wray, who has advanced to the top 24 contestants on the show, will perform a solo, followed by a duet with celebrity guest Katharine McPhee, on Sunday, April 4, at 8 p.m. Wray said she’s amazed at the opportunity to sing with McPhee and “kind of cried” when she found out she’d be her partner.

“I think it’s because I just didn’t expect them to say her, but it was such a good choice, you know, because she was on the show,” she said. “She has made music. She’s been on Broadway. She’s done TV. She’s done everything, just like I want to do, so it was really special to me.”

The top 16 contestant results will be revealed the following week, during the April 11 episode of American Idol.

After she performed “I’m Here” from the musical “The Color Purple” before celebrity judges Luke Bryan and Katy Perry announced she made it to the top 24, Wray was pumped up on an adrenaline rush and felt great about her performance.

However, when she reflected on it, she got scared and felt like it wasn’t one of her best. When she walked into the room with the judges afterwards, everything they were saying was “so nice and so good,” she said, but it was scary because for a moment it sounded to her like she wasn’t going to make it. But she tried to keep her composure, tried not to cry and balled it all up, she said.

With all that built-up tension, the news that she progressed was a “wave of relief,” and she burst into happy tears.

“It was an insane moment, but it was really special because honestly, I’m kind of glad that he kind of psyched me out, because then that feeling of relief was just so huge, so I felt like I truly was on cloud nine,” she said. 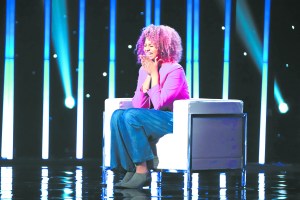 Alyssa Wray cries happy tears after celebrity judges tell her she made it into American Idol’s top 24 contestants. – ABC/Eric McCandless

Wray said she’s honored to be on the show with the other 23 final contestants, who she described as “crazy-talented people.” She’s met some of her best friends through the show, like Grace Kinstler, with whom she performed a powerful duet performance of Bruno Mars’ “Grenade.”

Wray’s 19th birthday was March 30, and the group sang “Happy Birthday” to her, arranged candles to form the number “19” surrounded with a circle of candles as a surprise for her. It was really sweet, she said, and Kinstler was one of the ones who came up with the idea to do it for her.

Kinstler is now like a sister to her and reminds her of “a softer version” of her mom, she said with a laugh. She loved being paired with her because they both have big voices but don’t try to outshine each other — they’re both a bit “quirky and crazy” and shy, she said, so it “creates a happy medium.”

Viewers have complimented not only Wray’s performances but also her personality. For example, some of the things they’ve said are that she seems genuine and nice, “Which is really cool that I have that kind of impact through a TV screen,” she said. She enjoys interacting with viewers and tries to answer as many direct messages as she can.

“The fact that so many people are taking time out of their day to not just compliment my performance but to compliment my character — that means a lot to me,” Wray said.

For what American Idol voters should know, she said, “I just think that if the audience connects with me and if viewers really think that my music and my artistry has touched them, I would like for them to vote for me. I think that they should vote for whoever they can connect with.”

Later, she said, “And if that’s me, then I would be honored to have their vote.”