Vaccinations may come to Kentucky state prisons next week 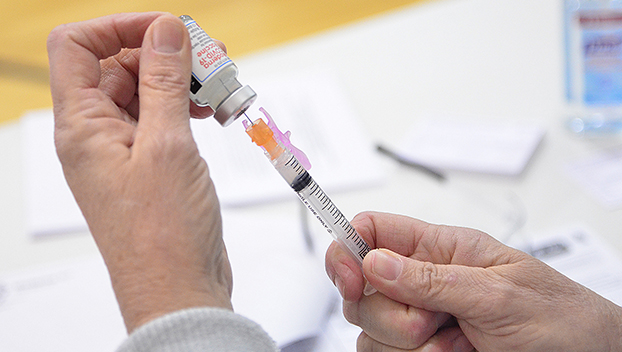 Vaccinations may soon be coming to Kentucky prisons. - Photo by Jeff Moreland

BY BRUCE MAPLES AND AL CROSS

As the state’s coronavirus vaccination program has gradually expanded, so have questions about the very limited vaccinations of inmates in the state’s prisons. Questions have been raised recently by families of inmates, their advocates, the news media and state legislators.

During his press briefing Wednesday, Gov. Andy Beshear noted the questions and announced that the state was expecting to offer the vaccine to all state inmates next week, a week earlier than first suggested, with the only exceptions being two facilities still recovering from Covid-19 outbreaks.

Beshear credited that to an earlier-than-expected shipment of the Johnson & Johnson one-shot vaccine, to come Friday or Monday, April 2 or 5. The state is using the one-dose vaccine for inmates so they don’t have to follow up with those who might have been released to get their second shot.

After Beshear’s briefing, The New York Times reported that a factory mixup had led to a halt in shipments of the Johnson & Johnson vaccine, which could delay the prison vaccinations.

Kentucky has one of the nation’s highest incarceration rates, so many of its jails and prisons are overcrowded, many jails extremely so. Add that to normal confinement, in which people are often in close contact for meals and other activities, and you have an almost ideal setting for a virus to spread.

The state has the third-highest death rate among state prisoners from Covid-19, and the third highest rate of coronavirus cases, according to The Marshall Project, a nonprofit news organization that deals with criminal-justice issues and has tracked prison cases and deaths during the pandemic.

A longtime state legislator and criminal-defense lawyer said Tuesday the state needs to vaccinate inmates in prisons and jails as soon as possible.

As she voted to spend millions of dollars in federal relief, including $30 million for county jails, Sen. Robin Webb, D-Grayson, told other members of the Senate Appropriations and Revenue Committee, “The best thing we can do for the jails and people in them are to get vaccinations to the inmates; I don’t understand why that’s not been mandated.”

Told afterward that helping people behind bars is not politically popular among some voters, Webb said, “This is Holy Week. I don’t think that’s the way Jesus would look at it, or the way we’re supposed to be looking at it.”

She’s taking it personally: “I’m not getting a vaccination until the inmates are vaccinated. . . . People who don’t have a choice where they’re going should have been a priority.”

Webb said vaccinations are critical in prisons and jails because inmates are more likely to have underlying health issues. Among prisoners, “We have grave health problems with the use of needles, blood-borne disease, people needing dialysis,” she said.

“If you’re not into the humanitarian side, let’s look at the fiscal side,” she said. Long-term, “We’re gonna be spending a lot more money on these populations than the vaccine costs.”

Also, she said the situation makes it even more difficult to recruit corrections workers: “How are we gonna recruit officers? They were busing ‘em to LaGrange last year from my area” in northeastern Kentucky.

Asked if she had discussed the issue with the Beshear administration, she said Justice Secretary Mary Noble “was very responsive. … I know her heart’s in the right place when it comes to these issues.” Noble appeared at some of Beshear’s early pandemic briefings to discuss prison cases, but hat task has since been handled by J. Michael Brown, secretary of the Executive Cabinet and a former justice secretary.

Early in the pandemic, Beshear tried to reduce risk in state prisons by releasing almost 1,900 older, nonviolent offenders who were nearing the end of their sentences.

The state has prioritized vaccination of employees in prisons, but only last week did it say it would start vaccinating inmates, starting this week with those over 70. Many employees have been unwilling to be vaccinated; on Monday, the Corrections Department said 1,845 employees and contractors have received a shot, and another 338 were pending, for total of 2,193. That is barely half of the agency’s 4,288 employees and contractors.

Several prisons have had serious Covid-19 outbreaks, most recently at the Kentucky State Penitentiary and the Western Kentucky Correctional Complex, both in Lyon County. Those two prisons will not be included in next week’s vaccinations, and will join in when it is medically safe, Beshear said.

The infection rate at individual prisons is hard to pin down. Inmates come and go from facilities, so the total number who have been incarcerated during the pandemic is greater than the current population.

Some reported case numbers are striking. In some cases, as much as 70% of the population in a state prison has tested positive for the coronavirus.

The Northpoint Training Center near Burgin had an average daily population in 2019 of 1,252 inmates and 337 staff, for a total population of 1,589. The latest Corrections Department report shows it has reported 1,040 cases.

Or take the Correctional Institute for Women near Pewee Valley. Its average daily population was 215 inmates and 174 staff in the 2019 annual report, for a total average population of 399. In the latest DOC report, 470 cases have been reported since the pandemic started.

The New York Times reports that in federal prisons in Kentucky, which have 6,123 beds, there have been 2,586 cases of Covid-19, led by the Federal Medical Center in Lexington, with 843. Others: Federal Correctional Institution Manchester, 765; FCI Ashland, 434; United States Penitentiary McCreary, Pine Knot, 282; and USP Big Sandy, Inez, 262.

Centre plans to return to in-person activities for fall…