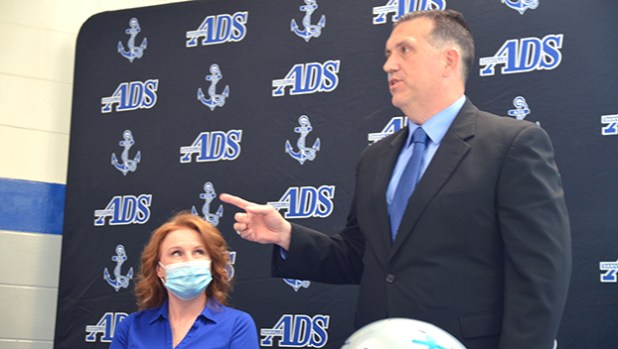 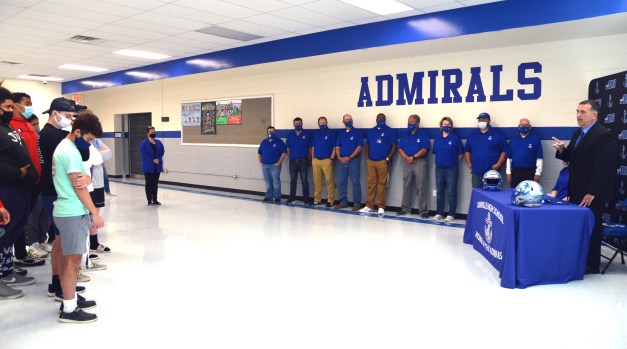 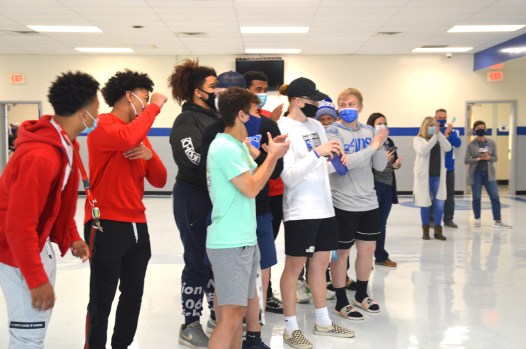 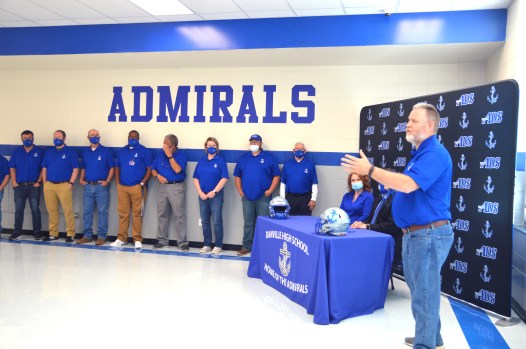 Principal Thad Elmore speaks. The selection committee for the new coach is pictured behind him. - Photo by Olivia Mohr 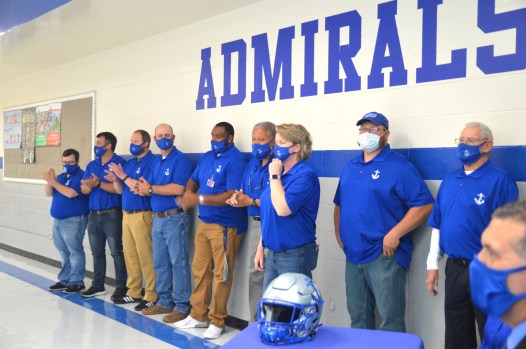 Athletic director Lisa Fisher adjusts her mask while she talks about the selection committee for the new coach. - Photo by Olivia Mohr

BY OLIVIA MOHR AND MIKE MARSEE

He said he was looking forward to meeting each of the players individually to talk about their academic, life and football goals and said he wants to “hit the ground running.”

Peach comes to Danville from Trigg County, where he coached in 2020. However, he is most familiar to local football fans because of his long tenure at nearby Anderson County.

A Lawrenceburg native, Peach spent 15 seasons at Anderson County High School and became the school’s winningest coach before he was fired in February 2020. His career record is 153-87 in 20 seasons, and he went 15-7 in two seasons at the collegiate level.

Peach posted a 114-65 record at Anderson from 2005-19. His 2011 team reached the Class 5A championship game before losing to Bowling Green High School, and the Bearcats also won a regional championship in 2013.

He was the Class 5A coach of the year in 2007, he received the Blanton Collier Sportsmanship Group Coach of the Year award in 2017 and he coached the Kentucky all-star team in 2019.

After five seasons as an assistant coach at Franklin-Simpson, Peach got his first head coaching opportunity at Hancock County in 1999. In his first season in Lewisport, the Hornets, led by 1999 Mr. Football Travis Atwell, went 12-3 and reached the Class 1A championship game before losing to Beechwood.

He spent two seasons at Hancock and two at Paul Dunbar before moving to Campbellsville University, where he played collegiately, to succeed Ron Finley as only the second coach in that program’s history.

After two seasons at Campbellsville, Peach returned to high school coaching in 2005 at Anderson, his alma mater. He remained there through the 2019 season, after which he was removed as coach.

Three days later, he was offered the jobs at Trigg. The Tigers went 3-7 in his only season in Cadiz.

YourSportsEdge.com reported Peach’s resignation Friday, saying he had met with his players at Trigg that morning to inform them of his decision.

Peach played at Anderson for Sam Harp, who coached at Anderson before moving to Danville in 1988 and leading the Admirals to seven state championships and 10 trips to the state finals.

Harp returned to Anderson in 2017 after leaving Lebanon, Tennessee, serving on Peach’s staff for two seasons.

Peach replaces Clay Clevenger, a Danville alumnus who was fired in January after eight seasons at Danville, where he went 65-32. Clevenger, who replaced Harp in 2013, led the Admirals to the Class 2A championship in 2017 and a runner-up finish the previous season.

During his speech Peach spoke highly of the mentorship form Sam Harp, who he said was one of the “all-time greats” of the Danville Admirals and someone who coached him in high school. He’s one of the factors that encouraged Peach to become a coach himself.

“He had such a positive impact on me when he coached me,” Peach said. “When I got into coaching, I wanted to have that same impact on young men who are under my care.”

Peach said he embraces the football craze in Danville and the expectations that come along with it and said he understands the “great football tradition here.”

Elmore said when he and Fisher put together the selection committee that chose Peach, they wanted to represent every group they could — community members, parents and alumni being some. The committee consisted of teachers, coaches and others, like city commissioner James “J.H.” Atkins, who previously worked for the school district. Elmore said the committee had some “candid” conversations about what they were looking for in the new coach.

“We felt very strongly we wanted to make sure it was a proven winner, was one of the characteristics that was important,” Elmore said. “Another was community involvement. Another – student-focused. That’s also on the field and the classroom. And we believe Coach Peach brings that winning attitude. He also brings that attitude on the field but also the classroom and presence in the building, working collaboratively with the whole school.”

As for Peach, he has been part of 171 victories, taken teams to state finals and even coached some Danville players when he was the head coach of the Kentucky all-stars.

Superintendent Tammy McDonald said when it comes to the coach decision, it was the selection committee’s “100%.”

“I think that they did an amazing process, and it was such a great committee that I feel very strongly that they made an amazing decision,” she said. “I’m excited about our new coach, and I know that our coach, with Mr. Elmore and our athletic director and all of our students, will have a great season.”

In the transition from the firing of Clevenger to now, with the selection of the new coach, she said “The district is moving forward.”

Elmore said the assistant coach has stepped up for the team while it transitions away from having Clevenger as head coach. As far as the school building itself, he said there are about 260 students now in the building, and the school is moving closer to graduation for more than 120 students. That’s really what the school has been focused on, he said. It has been a transition with the selection process for a new coach, he said.

“It is a time of transition,” Elmore said. “It’s something that you can’t deny. But I feel like the staff and the students will rise to the occasion moving forward in regards to that.”