Virus case numbers keep falling, but reporting may have been limited 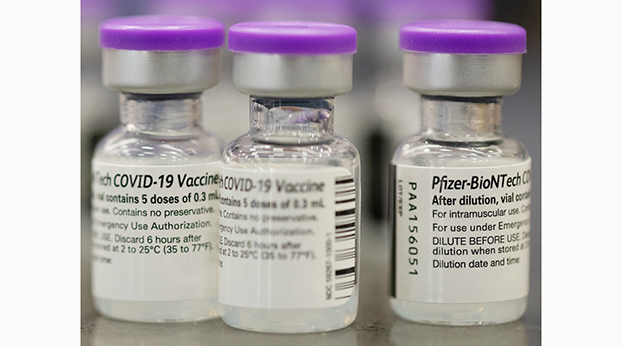 More of the COVID-19 vaccine will be coming via the federal government, Gov. Andy Beshear said Tuesday. - Photo by Mark Cornelison/UK

Some key measures of the pandemic in Kentucky continued to fall Tuesday, but it remains to be seen how much that has to do with testing labs being closed during Easter weekend.
The state reported 344 new cases of the novel coronavirus Tuesday, well under than half the number reported last Tuesday. That reduced the seven-day rolling average of new cases by almost 10 percent, to 538 per day. That is the lowest average since Aug. 11, almost eight months ago, but Gov. Andy Beshear said Monday that it would be “hard to tell what’s going on until Wednesday” because of lab closures.
The statewide rate of daily new cases in the last seven days fell to 9 per 100,000 residents. Counties with rates more than twice the state rate were Simpson, 48.5; Powell, 38.1; McCreary, 31.5; Whitley, 28; Morgan, 21.5; Allen, 20.8; Robertson, 20.3; Knox, 19.7; Floyd, 19.7; Lee, 19.3; Mason, 19.2; and Metcalfe, 18.4.
Counties with more than five new cases were Jefferson, 56; Christian, 22; Scott, 17; Carter, 16; Fayette, 12; Laurel, 11; Pulaski, 10; Harlan, 9; Boone, Floyd and Pike, 8; Hardin and McCreary, 7; and Daviess and McCracken, 6.
The percentage of Kentuckians testing positive for the virus in the last seven days stayed stable, at 2.89%, but hospital numbers were up.
Kentucky hospitals reported 376 Covid-19 patients, 23 more than Monday; 116 of them were in intensive care, 19 more than Monday; and 57 were on ventilators, 11 more than Monday.
The state added eight more deaths to its list of Covid-19 fatalities, four from regular health-department reports and four from the ongoing audit of death certificates. The state’s death toll from the disease is 6,184.

Beshear’s press release quoted him on one topic: vaccinations. “If you haven’t gotten your Covid-19 vaccine yet, look at our list of where you can get your shot of hope this week, at vaccinemap.ky.gov. If you’ve already been vaccinated, reach out to one friend or family member who is still trying to get signed up and see if you can help them. This is an all-hands-on-deck effort. We are in a race against harmful Covid-19 variants that could threaten the progress we’ve all sacrificed so much to achieve.”

President Biden asked Americans to wait until July 4 to resume normal activities, pointing to increasing case and hospitalization numbers in many states, especially among young adults. “We’re still in a life and death race against this virus,” he said. “The virus is spreading because we have too many people who see the end in sight and think we’re at the finish line already. Let me tell you deadly seriously: We’re not.”

A photo ID will be required to enter, and temperatures will be taken before entering. Anyone attending an appointment must wear a mask at all times. “Accommodations will not be made for those without appointments,” a press release from Beshear’s office said. “While staff make every effort to answer all questions during this appointment, UI specialists may not be able to provide a resolution during a single appointment. Some claims could require additional paperwork or take additional time to complete. An additional appointment will not be necessary.”