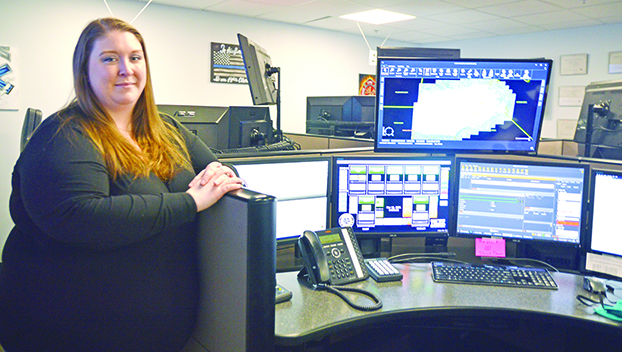 Krystal Smith grew up in Danville always knowing she wanted to help people as part of her future career, but at the time she didn’t know how. She said being a doctor or nurse didn’t seem like it would be for her. Eventually she got certified to work at the City of Danville 911 Center.

“One thing that I really love is that I am serving my community that I grew up in and that I live in,” she said.

Now, Smith has been with the center, located inside City Hall, for about five and a half years and became an assistant terminal agency coordinator, or TAC, about a year ago. She has about 33 years before it’s time for her to retire, but she said she wants to retire at the center and can see herself working there until her career is over.

“I couldn’t see myself being anywhere else,” she said. “That’s what I always say.”

Smith said the job is stressful and emotionally taxing, since dispatchers are the first ones people talk to if they’re having an emergency. One of their most important roles is they help talk people through things over the phone, like if the person on the line has to perform CPR.

“We are their first point of response,” she said. “If somebody’s doing CPR, we’re the ones that are giving instructions until a first responder gets there.”

One phone call that has stuck with Smith over the years was during her first year at the center, she got an Emergency Medical Services call from an elderly man saying his wife was dying. She remembers dispatching the EMS unit and coming back to the phone with him.

“He was praying over her, and I just prayed with him,” she said. “There wasn’t much else that could be done at that point, so that’s one call that’s always stuck with me.”

Something that makes the job particularly difficult is, since she has grown up in Danville, if she gets calls from people she knows about a loved one dying or with other unfortunate news. But she said she pushes through and tries to do what she needs to for each call. Something people at the center say is to treat every call like it’s from your mother, Smith said, because they want them to get the best service and emergency response they can.

One thing Smith prides herself on is her ability to “leave work at work,” though some calls stick with her. She has a 4-year-old daughter she takes care of, and she makes time for her family, and she said she’d rather focus on her life with family than her life at work when she’s at home.

If she’s had a particularly stressful day, which she said can consist of nonstop calls or a lot of “hot calls,” which are dire emergencies in progress like physical domestic calls or shootings, sometimes she needs to hole herself up in her room when she gets home while her boyfriend watches her daughter, so she can have some time alone.

“I get very overwhelmed by hearing so much all day long,” she said. “I enjoy the quiet when I go home.”

Later, she said, “If we have calls about a kid, I’ll go home and play with my kid, and it just makes me feel better,” whether it’s playing with Barbies together or sitting on the couch watching a movie.

“It’s reassuring to know that she’s OK and I’ve got her safely beside of me, compared to other people that may have had a much worse day,” Smith said.

She finds herself constantly in fight or flight mode at work because she said she tries to put herself “in that caller’s shoes,” but it’s something she can take home with her, especially because she’s a parent. She said she’s become somewhat hyper-aware of things that can go wrong — if someone knocks on the door she’s often on her toes and on guard, knowing how badly things can go “in a split second.”

Smith said it’s also a job where no one can ever say they’ve “seen it all,” no matter how long they’ve worked at the center, and she said dispatchers have both in-house training and state certification to know how to control and handle difficult conversations on the phone. And everyone responds differently to different approaches, she said, so it’s important to be able to quickly figure out the best approach based on the caller.

In an emergency it can be easy for people to get aggravated — for example, in an emergency they might not understand why a dispatcher is asking them what color their house is, which Smith said is important for first responders to know — it makes it easier for them to find the house instead of just having the address.

“People get very aggravated with us sometimes, and all the questions that we ask, but we have a reason behind every one of them,” she said.

It can also be stressful and upsetting if, for example, a dispatcher is helping walk someone through CPR over the phone and the CPR isn’t successful. That’s when staff bands together to give each other advice or assure each other they did what they could, Smith said, because “You can develop PTSD and depression and anxiety over that stuff real fast.”

The staff has a family atmosphere with each other, she said. One thing second and third shifts do every Thursday when their shifts overlap is plan a dinner together where everyone brings a dish. They talk about it all week long in a big group text, planning what everyone will bring. Sometimes police officers and deputies will come and eat with them too.

“I just find it nice,” Smith said. “It’s kind of like Sunday lunch at Mom’s kind of thing. I just feel like it’s that for us.”

As a TAC, Smith not only answers calls but is able to train new hires and does a lot of paperwork — she enters felony warrants into a nationwide database and also enters stolen items into a database, like guns and vehicles. She also keeps records of missing people and violent people, as well as emergency protective orders and domestic violence orders.

One thing Smith said was important to note is that the 911 center is now hiring and needs more people to take calls. The center hasn’t had a full staff since she started working there, she said. To qualify for the job an applicant must become state-certified through Kentucky State Police academy classes and pass a background check, a lie detector test and a psychological test, she said. Otherwise, one must be at least 18 years old and have a high school diploma.

The job doesn’t have a high turnaround rate or anything, she said, “It’s just people think they want the job, they come in and we explain to them everything that we do, how serious it is,” and they might change their minds, which she said she understands due to the stressful and sometimes tragic nature of the job.