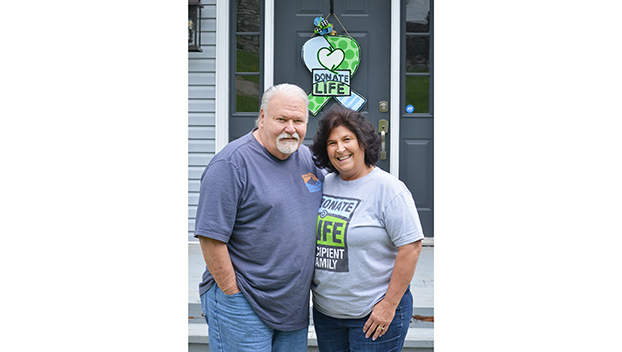 Steve and Connie McGirr know first-hand how important it is for people to sign up on the national organ donor transplant registry. Steve McGirr received a double lung transplant just about 13 months ago. -Photo by Robin Hart

Fishing with a grandchild, enjoying birthday cake, and playing a round of golf are just some of the everyday, special occasions that organ transplant recipients of all ages are enjoying today, thanks to the heroic and unselfish acts of others.

And since April is National Donate Life Month, to help raise awareness of the importance of being on the national organ donor registry, Steve and Connie McGirr want to share their story.

The McGirrs have been married 33 years, live in Danville and they have 11 children and 11 grandchildren who all live nearby.

Connie said in January of 2019, they found out both of Steve’s lungs contained asbestos and his doctor told them he had one to two years to live.

One of his daughters, who is a cardiovascular sonographer for Ephraim McDowell Health, suggested that he get another opinion. The local cardiac specialist then referred Steve to a pulmonologist.

After months of testing, they heard the news that Steve had asbestosis and actually had only four to six months to live.

Steve said he remembers sitting in the doctor’s office and that his wife and daughter “got teary-eyed,” while for some reason, he just smiled a little and thought, “This is pretty much unreal.”

He needed to be placed on the organ transplant list as soon as possible because his condition was worsening rapidly, he said.

However, it takes several months to undergo all of the testing, scanning and retesting to even get placed on the organ transplant list, Connie said. Plus, he had to lose 50 pounds in six months.

But Steve was running out of time.

To buy a little extra time, Steve received doses of Esperin to slow down the formation of fibroids in his lungs while he waited to get on the list.

Steve said when you have only two to four months left of life, any time is appreciated.

On May 22, 2020, during the COVID-19 pandemic, Steve had to be admitted to the University of Kentucky Hospital and was finally placed on the waiting list. He was breathing on 100% oxygen, Connie said.

Just nine days later a young man in Kentucky unexpected died and his lungs, which were a perfect match, were transplanted into Steve’s chest.

“This young man unfortunately lost his life in an accident. It was tragic. But the heart that was donated is giving somebody else life. His lungs gave me life,” Steve said.

“I just know that if it hadn’t been for him, there would have been no more time. He saved my life. People should realize that if it’s their loved one that’s donating, that they’re saving lives everywhere,” Steve said.

“I’m just so thankful. I’m thankful for the time that I’ve got. I’m thankful that the Lord  has worked his hand in all of this. None of this would have been possible if it hadn’t been for the Lord. … I think he’s got a plan for me in my life, but I don’t know what it is.”

But for now, Steve said he wants to encourage people to sign the organ donor registry.

He’s also enjoying spending time with his family, watching his grandchildren catch fish and turtles in the stream behind their home.

The website states that one organ donor can save up to eight lives; and one tissue donor can heal more than 50 lives.

There are no age limits as to who can be an organ donor, and parents or guardians must authorize donations for children under age 18. The oldest donor is Kentucky was 83 and she saved three lives.

To register to be an organ donor, go to https://registermeky.org/

All proceeds will benefit Team KY Transplant Games of America which is comprised of athletes and competitors who have received an organ or tissue transplant.

Hole sponsors and donations are being accepted.