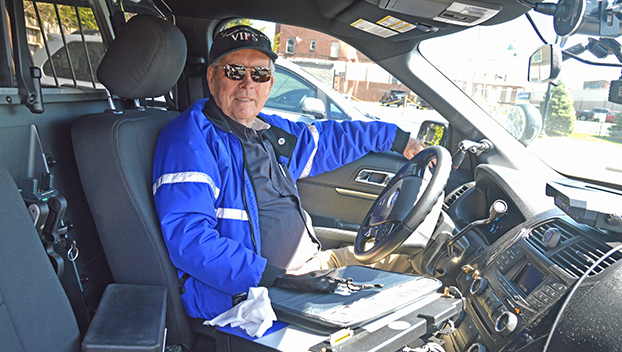 Jack Hendricks is part of the Volunteers in Police Service program. On a local level, volunteers drive Danville police cars around to check for speeding, increase visibility of police vehicles and help staff out. - Photo by Olivia Mohr

During a ride-along with Jack Hendricks, a retired magistrate who has been part of the Volunteers in Police Service program since around 2006 when the Danville Police Department first got involved with it, he said the program allows volunteers to fill in for officers, especially if a department is short-staffed like the DPD is. Volunteers cruise around for them to increase visibility of police cruisers around town, check for speeding and watch for any suspicious behavior.

For example, one stop Hendricks made during the ride-along was at a crosswalk on Main Street a lot of Centre College students use. There had been complaints of near-misses at the crosswalk, so police are currently monitoring the area periodically.

“When you’re short-staffed, it’s hard to do that, and it’s double hard to be seen in neighborhoods,” Hendricks said, which he said is why VIPS participants help at the crosswalk and spend some time driving around neighborhoods during their shifts.

That day a Morning Pointe parade, where police cruisers would have taken residents out of the facility for some time away, was sadly postponed due to weather, Hendricks said. That’s another thing VIPS help with, is parades and traffic control.

Hendricks said most people in the VIPS program have a law enforcement background. It’s not necessarily a requirement, but a preference. In the late ‘80s, Hendricks worked for the Fayette County Sheriff’s Office after he retired from the United Parcel Service. Hendricks is also a veteran of the U.S. Air Force and active in local veteran organizations and events. He served in the Air Force from 1957 to 1964. 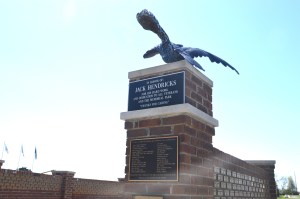 Henricks is a veteran and, with his wife and many other people, created this wall to honor fallen soldiers and those who served, located near Millennium Park. Photo by Olivia Mohr

At the time the DPD became involved with the VIPS program, Jeff Peek — who is now retired and part of VIPS — was the police chief. He and Hendricks were close, working together on veteran activities, parades and other events over the years. Peek mentioned the VIPS program and said he wanted to start it in Danville. He and Hendricks traveled around northern Kentucky to areas where other departments had implemented it and learned how it worked, then started it in town with about four people.

Hendricks said he’s part of VIPS to help the community but also to keep himself occupied. He retired from UPS at the age of 48 and got involved with the Fayette County Sheriff’s office, where he was a constable. He also was a Boyle County magistrate for eight years “as something to do,” and ended up enjoying it though he said before then he never thought he’d be involved in politics.

He said he would have “gone crazy” during the pandemic had it not been for his involvement with VIPS. And it feels great helping out, he said. It takes about three hours and 10 minutes to cover the whole city’s subdivisions, shopping centers and busy businesses during a shift, and that’s with no major delays.

“We just don’t have officers that can spend a straight three hours just doing that,” he said.

He’s also scoped out areas where there have been recent break-ins, like at the corner of Smith and N. 5th streets. Having police cruisers in the area is meant to hopefully deter criminal activity and can in some cases make residents feel safer.

“They see a visibility, and they see that there’s a unit in the area, and it makes them happy,” Hendricks said about residents.

He said one thing he appreciates about the community is that in the Danville-Boyle County area he sees a lot of respect for police officers. For example, often halfway through his shifts he likes to stop at McDonald’s and get a cup of coffee, and sometimes the person in front of him in the drive-thru will pay for it for him, something officers experience as well.

When he passed one woman who was taking garbage to her curb, she gave him a wave.

“They just love to see us,” Hendricks said.