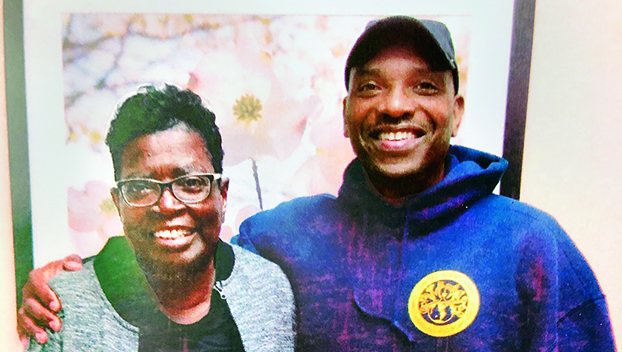 Danville native Jay (Julian) McCormack, 57, stands with his neighbor, Millie Boone on the day he donated his kidney to her on April, 13, 2016. -Photo submitted

April is National Donate Life Month. It’s a time to promote the importance of registering as an organ donor and to honor the donors who have saved lives.

Not all organ transplant surgeries save a life after the tragic death of an individual. Some special people volunteer to donate an organ while they’re living, without “reduced function to their own bodies,” according to the DonatelifeKY webpage, which includes a kidney, segments of their liver, lung and pancreas.

Danville native Jay (Julian) McCormack is one of those special donors.

McCormack is a 1981 graduate of Danville High School, and is African American. He ended up moving to Hampton, Virginia, in 1999 with his wife, Kathy.

The day they moved in was the day they met Millie Boone, who lived right across the street.

“She was the kindest, sweetest lady. She had a ton of love and welcomed us,” Jay said. “We just hit it off. We had a mother-son relationship from day one.”

Jay said he didn’t know “Miss Millie” had a problem with her kidneys until one morning about 5 a.m., when he saw her leaving her home.

Being a bit concerned, he asked Millie’s niece where she was going so early. That’s when he was told that Millie was going to dialysis because “of a bad kidney,” and she had been doing that three days a week for five or six years, Jay said.

That’s when he and his wife decided to be tested to find out if they could be a match for Millie, without her knowledge. When they left the building where they had been tested, Jay said he “got cold chills” and felt like something good was going to happen. He told Kathy, “I’m a match.”

And sure enough, he was. 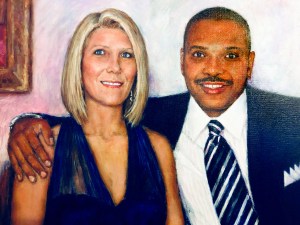 Kathy and Jay McCormack decided to be tested to find out if they would be a match for a kidney donation after learning about their neighbor being on dialysis for several years. -Painting by Anne Crawford

When Millie found out about what Jay and Kathy had done, “she was mad,” Jay said laughing. “Millie, don’t be mad because I’m a match,” he told her. “You take care of everybody. You do so much for everybody. It’s time for us to do for you.”

It took another year of further testing to make sure Jay’s kidney was a good match for Millie. And in the meantime, he also postponed having his own rotator cuff surgery.

Then on April 13, 2016, Millie and Jay went to the hospital together and one of his kidneys was removed and carefully placed into Millie’s body.

“The doctor said it fired right up,” Jay said.

Soon, Millie regained her strength and was able to enjoy cookouts with her family and friends. She was also finally able to travel some, and got to attend her granddaughter’s pageants and recitals, and even did some shopping, Jay said.

And for his part, Jay said recovering from the donating surgery was much easier than from the rotator cuff surgery.

Sadly, Jay said Millie died two weeks ago from complications of the medicines she had to take, which forced her back onto dialysis.

Jay said he was happy to donate a kidney to his close friend and neighbor. “We loved her so much.”

Separate from the Kentucky Donor Registry, living donation is not included when you register to become an organ, eye, and tissue donor online or at the circuit court clerk’s office. Once an individual decides to be a living donor, he or she must qualify through a hospital transplant program to be considered.

According to the Gift of Life Donor Program website, “organs are not matched according to race or ethnicity, and people of different races frequently match one another. All individuals waiting for an organ transplant will have a better chance of receiving one if there are large numbers of donors from their racial/ethnic background. This is because compatible blood types and tissue markers — critical qualities for donor/recipient matching — are more likely to be found among members of the same ethnicity. A greater diversity of donors may potentially increase access to transplantation for everyone.”

It also states that patients from communities of color make up about 60% of the national waiting list for a lifesaving transplant.

To sign up on the national organ donor registry, go to: https://www.organdonor.gov/register.html