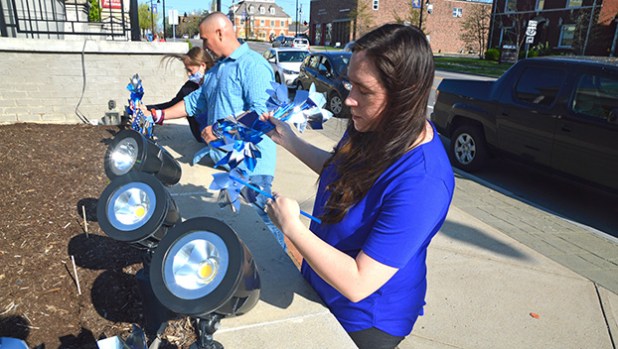 Staff of Court Appointed Special Advocates, or CASA, of the Bluegrass, and volunteers for the Department for Community Based Services plant blue and silver pinwheels outside City Hall on Monday. - Photo by Olivia Mohr 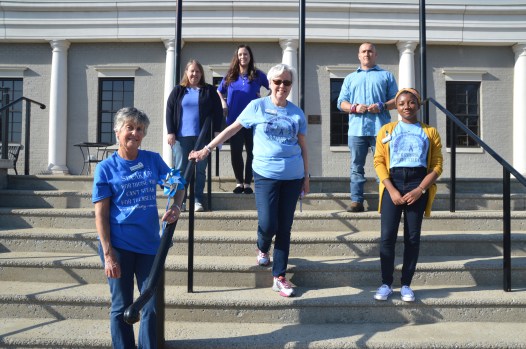 Staff of Court Appointed Special Advocates, or CASA, of the Bluegrass, and volunteers for the Department for Community Based Services, pose outside City Hall. - Photo by Olivia Mohr 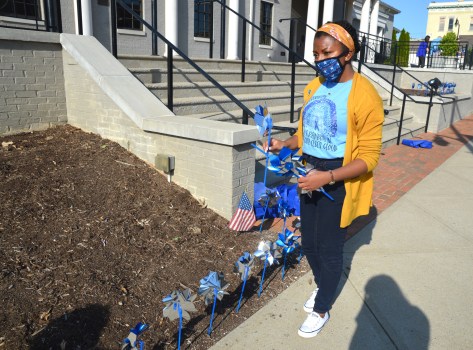 Remonica Garr, volunteer and community engagement coordinator for CASA of the Bluegrass for Boyle and Mercer counties, plants pinwheels. - Photo by Olivia Mohr 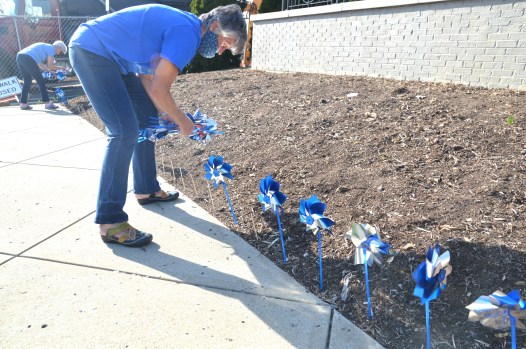 Before the Danville City Commission meeting on Monday evening, Court Appointed Special Advocates, or CASA, of the Bluegrass staff and Department for Community Based Services volunteers planted blue and silver pinwheels in the ground outside City Hall. They then gave a short presentation during the meeting about CASA of the Bluegrass, child abuse on a local level and Paint the Town Blue, an initiative during the month of April to focus on prevention and awareness of child abuse. CASA and the Heart of Danville will be “painting the town blue” the last week of April.

Remonica Garr, who is volunteer and community engagement coordinator for CASA for Boyle and Mercer counties, said CASA has been planting pinwheels for Child Abuse Prevention Month for many years but has only been doing the Paint the Town Blue initiative with City Hall since 2019. Garr said April is CASA’s busiest month for outreach because they know people can’t help if they aren’t aware of what child abuse looks like not only on a larger scale but also in Kentucky and the county.

Kentucky ranked first in the nation for child abuse for the third consecutive year, Garr shared during the meeting. When commissioners asked CASA staff what factored into high rates, they said possible factors are poverty and drug addiction and abuse. According to a CASA press release, in 2020 there were 176 new cases of child abuse and neglect in Boyle County alone.

Garr said the pinwheels are a symbolic creation by Prevent Child Abuse Kentucky. She said the colors blue and silver are used because blue is the color for child abuse prevention and silver is reflective and can gain attention from people passing by.

“Pinwheels are a playful thing and they represent childhood, and are a great reminder of the cyclical cycle that many young ones need and should have as a result of love and support,” Garr said in an email. “Because CASA of the Bluegrass advocates for children to find permanency in the form of a healthy and thriving home, our partnership with Prevent Child Abuse has been going on since 2008.”

Garr said to show solidarity against child abuse, people can take action. CASA is always accepting volunteers who are willing to accept a child’s case and “make recommendations on their behalf,” she said. During the month of April, CASA encourages people and businesses to highlight the color blue. Also, a lot of CASA’s finances come from grants and community donation, so CASA is selling blue door ribbons donated by A Lasting Impression florist for $5 and is also partnering with Trenton Edgington State Farm in Danville. During the month of April, Edgington is doing “Quotes for Good,” Garr said, where Edgington will donate $20 for every insurance quote he receives, with no obligation.

“The last week of April we would really love for our community members and small business owners to wear blue, decorate store front in blue, etc. to spread awareness,” Garr said. “Child abuse is a tough subject and it deserves our attention. In order to show solidarity we need to show compassion and action, support and a common interest.”