A field of their own: Danville softball opens Danny Gadberry Field 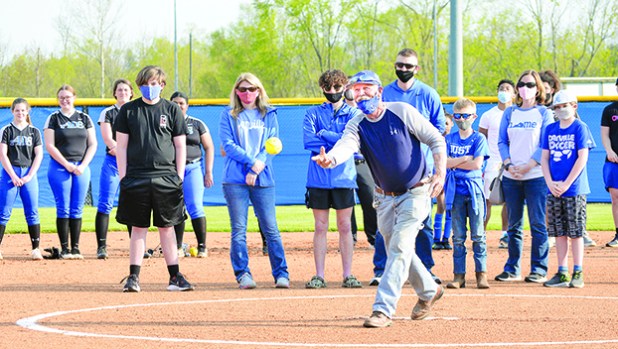 Danny Gadberry throws the first pitch on the softball field bearing his name as family and Danville softball players look on. - Photo by Robin Hart. 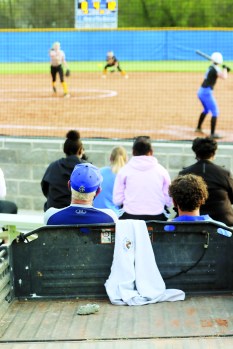 Danny Gadberry watches the action alongside grandson Sam on Tuesday during the opening game at the Danville softball field that was named in his honor. - Photo by Mike Marsee 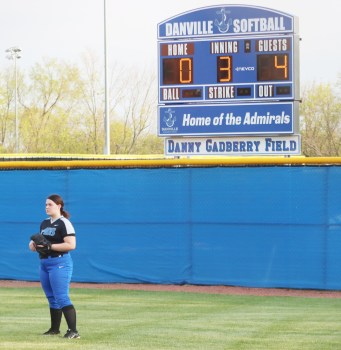 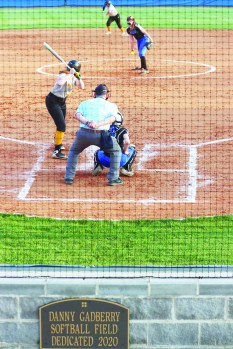 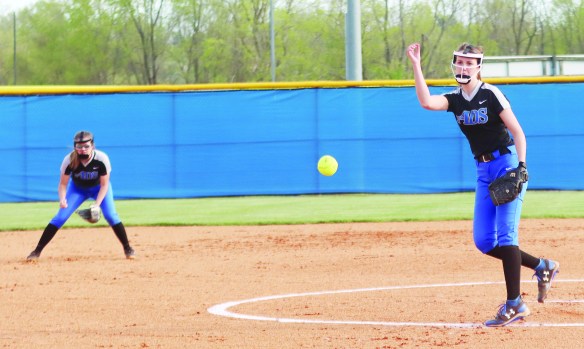 Danville pitcher Ella Dampier delivers the first pitch Tuesday in the opening game at Danny Gadberry Field, the Lady Admirals' new home that was named in honor of the longtime groundskeeper. - Photo by Mike Marsee

It was a beautiful night for a ballgame, and Danny Gadberry had the best seat in the park.

Sitting in the driver’s seat of his familiar utility vehicle, Gadberry was watching the first game played on a field that he designed and that was named in his honor.

The Danville schools and the Danville softball team opened Danny Gadberry Field on Tuesday night with a ceremonial first pitch by the field’s namesake.

“It really makes me proud, it does,” Gadberry said.

The field is the first true home field for Danville softball after 23 seasons of playing at local parks. It also brings all of the school’s spring sports together in the same complex.

“This is a field that those of us who have been at Danville for a long time have waited and watched for,” Danville athletic director Lisa Fisher said. “There have been plans in place before that didn’t come to fruition, and to finally see this field and open it up tonight just brings a lot of excitement to our team, to our school and even to the community.”

The grand opening came a year later than expected. The field was ready for the 2020 season, but it sat idle after the season was canceled due to the COVID-19 pandemic.

The school district announced in January 2020 that the field would be named in honor of Gadberry, who was instrumental in the field’s design and development, and he said Tuesday he was glad to see it finally being fully used.

“I am tickled to death,” he said. “I was hoping we could start this last year … but things happened.”

From his window at John W. Bate Middle School, where he teaches special education, Danville softball coach Tim Brietenbach could see the field taking shape and couldn’t wait for his team to occupy it.

“This is a great blessing for Danville softball,” Danville coach Tim Brietenbach said. “It’s nice to have our own home.”

When the team began play in 1997, the team’s home was Sixth Street Field in Henry Jackson Park. It later moved to Troy Trumbo Field on the other end of the park, then to Millennium Park.

Now all of the school’s spring sports — softball, baseball, tennis and track and field — are together in the Sam Harp Athletic Complex.

That’s important to the school and important to Gadberry, a 1971 Danville alumnus who has worked for the district as a buildings and grounds maintenance technician since 1998 but began volunteering at the school’s athletic fields years before that.

“Everything’s all together now,” Gadberry said. “We don’t have to drive across town. We’ve got baseball, softball, tennis and track all going on at the same time in the spring, and if I’ve got to do anything it’s a whole lot easier to work both (the baseball and softball) fields together than it is to drive across town like we used to.”

The Danville and Bate softball teams lined up along the infield behind Gadberry and members of his family for the ceremonial first pitch, which preceded the Lady Admirals’ 15-3 loss to Berea. Behind them were athletes and coaches from other Danville sports.

“Danny’s done a lot for all of our kids, all of our coaches and the teams. They’re fortunate to get to play on the surfaces they play on,” Fisher said. “But this softball field will be extra-special to him and to us, too. He saw it from the selection of the site all the way through to throwing the first pitch tonight.”

Gadberry was intricately involved in the design and construction of the field, and he and other members of the district’s maintenance and grounds crews did a great deal of the work themselves.

Gadberry seeded and fertilized the playing surface, making sure to surround the dirt infield with grass to better protect it. He made sure to include a bullpen just outside the home dugout, and he even built customized dugout benches. He even installed the plaque behind home plate that bears his name.

“He has put all kinds of work into this,” Fisher said. “To be here tonight with the surface, to see what Danny’s put in from the get-go, to watch this go from the ground up has also been something I’ve enjoyed as the athletic director.”

Breitenbach said he likes a number of the field’s features, including the 8-foot outfield fence, LED lights and outfield grass that is soft but fast.

“He just puts a lot of hours in, and he puts you to work, too, as a coach. I’ve learned so much from him about taking care of the field and things like that, so you kind of appreciate it more.”

The field includes permanent seating behind home plate for about 150 fans, as well as bleachers and room for folding chairs on either side and grassy berms where fans can sit on blankets.

There is a press box atop the grandstand, and while the concession stand and restrooms are in temporary facilities, there are plans for a building that will house both of them.

But above all, it is a place for Danville and Bate softball players to call their own.

“This is their home now,” Brietenbach said. “We’re appreciative of that, and we’re lucky to have it.”

Fisher said she was grateful to the board of education and administrators who made the field possible.

“It’s wonderful to have a playing surface like this, to have a dugout that is ours, not to have to take signs up and down for home games,” Fisher added. “We’ll make it home, we’ll decorate it like we like it and we’ll be able to leave it like that.”

Gadberry said he thinks the field will be a source of pride for the players.

“Now that they’ve got to practice on it and play on it, they’ll get a little more excited about it,” he said. “And hopefully we’ll get more kids to come out and play.”