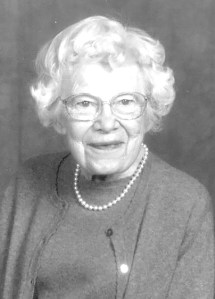 Margaret Mary Magdalene Ballard passed away April 14, 2021 at her daughter’s residence, surrounded by her loving family. Mary was born on July 22nd 1919, in Holyoke, Massachusetts, the oldest child of John Joseph Somers and Sarah Margaret Olney Somers. On her mother’s side, Mary was a descendant of two of the co-founders of Rhode Island, Thomas Olney Sr. and his wife, Mary Ashton.

The couple came to the New World, with their two sons, on the ship, Planter, in April 1635. Mary’s father was born in Lucan, Ireland and immigrated through Ellis Island in 1912. Mary trained in nursing at Mercy Hospital in Springfield, Massachusetts. A proud New Englander, she enrolled at Boston University and worked at Massachusetts General Hospital before entering the U.S. Army Nurse Corps, 811th Air Evacuation Squadron, at the age of 23. First Lieutenant Somers served two years in England where, following D-Day, she cared for wounded soldiers in hospital flights from France and Germany to Britain.

She was stationed behind enemy lines at the Battle of the Bulge with U.S. troops and entered Paris, the day after its liberation. After the war’s end, 1st Lt Somers met the physician who would become her husband, Captain Joseph Aloysius Ballard, as he answered the call during her first night service at the Chanute Field Army Hospital in Illinois. The rest was history.

Mary also has many beloved nieces, nephews and sisters-in-law hailing from Holy Cross, Kentucky and western Massachusetts. Besides her parents, she is predeceased by her husband, her son, John Ballard, her sister, Elinor Glynn, and her brothers, Ernest and John Somers.

Services will be held on April 17th at the hour of noon at Christ the King Cathedral, 299 Colony Blvd, Lexington. Masks and social distancing required. Burial will follow in the Calvary Cemetery, Monday, April 19th at 12:30 pm. In lieu of flowers, donations may be made to the Catholic Action Center, http://www.catholicactioncenter.net or P.O. Box #324 Lexington, KY 40588.