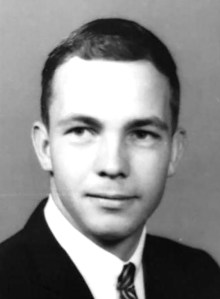 Bob was born in Danville, KY to William and Margaret Leigh. He grew up on Grant street with his three sisters Mary Francis Leigh Terhune Vest (2019), Amelia Leigh Goode (2021) and Betty Leigh Goode. They later gave him 10 nieces and nephews and they adored their Uncle Bob.

Growing up he was very active in Boy Scouts. He earned the Eagle Scout rank not just once but twice. Bob played High School football and was a member of the ROTC. After graduating high school, he went off to college at Eastern Kentucky University where he earned his bachelor’s degree in Business Admiration and met the love of his life Brenda Owens. They were married on August 22, 1964 and in 1966 they had their first daughter Susan and then their second daughter Amy in 1971.

Upon graduating college, Bob enlisted in the Army as an officer and went straight into pilot training. He specialized as a fixed wing aviator. Captain Leigh served in the Vietnam War where he earned several medals including a top honor Bronze Star for his heroic service in Vietnam. Bob ended his service in 1969 with honors. After serving with the Army, He pursued a career in Finance with Westinghouse and then CIT (The Associates) that moved them around a lot from Pittsburg to Orlando. Finally they settled in Tampa, FL and built their dream home. He would live in that home until his death.

Bob and Brenda enjoyed traveling, the theatre and dining out, until Brenda’s death in 2004. Soon after her death he retired. He would spend his retirement traveling to KY to visit his family. He was involved in his grandkids lives, always planning different activities to do with his grandkids Austin and Sarah as often as he could. He loved working in his yard and hanging out with neighbors. He never remarried, he stayed committed to Brenda.

Kentucky services will be Friday, April 23, 2021 in Nicholasville, KY. Betts and West Funeral home will host a celebration of life get together from 9 am to 11 am and the service begins at 11 am. Following the service there will be a precession to Camp Nelson National Cemetery were the military will honor Bob’s service to our country. Bob and Brenda will be laid to in rest until our good Lord returns.