Rebel football season has a ‘ring’ to it 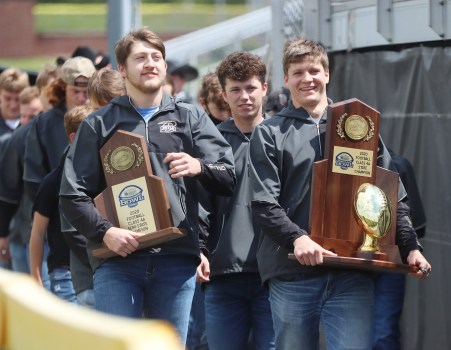 Luke Sheperson, right, carries Boyle County’s state championship trophy and Jagger Gillis, left, carries the semi-state trophy as they lead a parade of players onto the field at Rebel Stadium on Sunday for the team’s ring presentation ceremony. - Photo by Mike Marsee 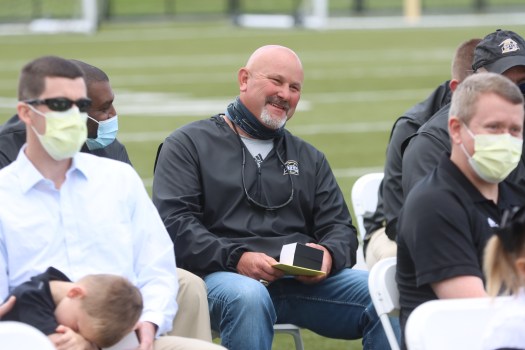 Boyle County assistant coach Jeff Hester reacts Sunday during a tribute to him that was part of the team’s ring presentation ceremony at Rebel Stadium. Hester retired after 20 years on the Boyle staff. - Photo by Mike Marsee 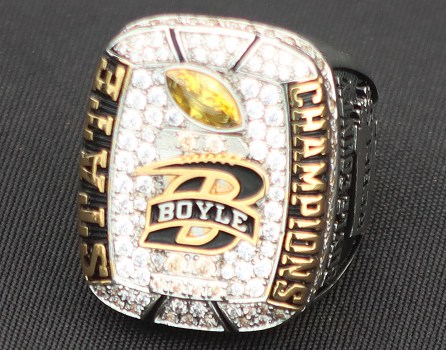 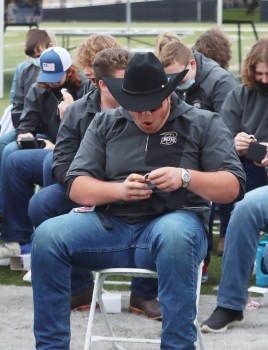 Boyle County senior Paul Brown reacts as he puts on his state championship ring for the first time Sunday during the team’s ring presentation ceremony at Rebel Stadium. - Photo by Mike Marsee 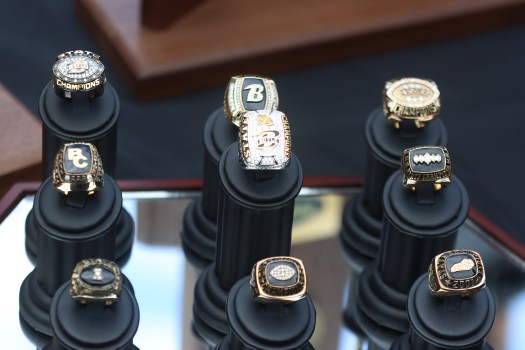 After the Boyle County football players got their rings, Jeff Hester got his.

The longtime Boyle assistant coach had to sit still — to the extent he could — for a surprise tribute that was folded into a ceremony Sunday at Rebel Stadium at which the Rebels received their state championship rings.

Hester, the Rebels’ longtime defensive coordinator and strength coach, recently retired after 20 years on the Boyle staff. He was part of seven of the school’s nine championship teams, including the 2020 Class 4A championship team that was celebrated Sunday.

“It’s been a great ride, a special place, a lot of special people,” Hester said.

Hester would have wanted no part of any sort of retirement tribute. He fidgeted in his chair as fellow coaches and family members heaped praise on him and shared stories and anecdotes.

“He was hating that. He sure didn’t want to see that,” Boyle coach Justin Haddix said. “He’s been a friend of mine, it’s like we’ve known each other for 20 years. It was great to honor him.”

Then three other coaching colleagues — former Boyle head coach Chris Pardue and former assistants Billy Goldsmith and Chris Mason — appeared from behind the grandstand, and each took a turn at the podium.

Earlier, Boyle’s players, including his youngest son Jake, gave Hester a standing ovation as Haddix gave him his ring.

“Coach Hester means the world to us, to everybody here,” senior tight end-linebacker Coleman Clark said. “Everybody could sit here and talk about him all day, all the stories.”

“I feel like he was one of my biggest supporters,” Brown said. “He has pushed me to become the person I am today. He was always behind me pushing me.

“He’s always been in my corner, and he has been the best coach that I’ve ever had hands down. He is such a great man, and I’m always going to remember everything that he’s done for me.”

Haddix had never met Hester before he came to Boyle in February 2020, but the two became fast friends. Haddix even spent a few nights at Hester’s home before he moved his family to Danville.

“We met and became close, and it was like we knew each other for 20 years,” Haddix said. “He’s a great friend. I’ve learned a whole lot from him, and I’m looking forward to seeing whatever he does in the future.”

Haddix was the fourth head coach during Hester’s tenure at Boyle. He joined Smith’s staff for the 2001 season — the third of what would become five consecutive championship seasons — and also worked under Pardue and Larry French.

“I really appreciate the opportunity Coach Smith gave me to be a part of this,” Hester said. “I got to learn so much from these guys and all the guys who have been here.”

Hester was the head coach at Garrard County, his alma mater, from 1997-2000, and he spent seven years as a Garrard assistant under Jerry Perry prior to that.

And he hasn’t stopped coaching yet. Hester was back to work within a few weeks of Boyle’s victory over Franklin County in the Class 4A championship game. He joined the Centre College staff, coaching inside linebackers during the Colonels’ spring season.

Hester said he’ll miss the day-to-day activities in the coaches’ office and on the practice field as much as anything.

“Being in the office with the coaches, the great relationships with the players and coaches,” he said. “Winning state championships, yeah, it’s great, but (I’ll miss) the process and the program and the work ethic, and being involved with guys that like doing it.”

Hester’s duties at Boyle may be filled by other coaches, but senior defensive end Ben Rush said it won’t be the same.

“They’ll never replace him, ever,” Rush said. “They can’t find anybody to fill that man’s shoes.

“He really does care about every single person he meets, and that’s probably the most truthful thing that anybody’s ever said about the man.”

The rings
The other big surprise of the afternoon was the rings themselves. Boyle’s seniors had been asked for input on what they would like to see on the rings, but the final design had been kept under wraps.

“We got the rings in last week, and I’m glad we got rid of them right quick,” Haddix said. “They were burning a hole in my pocket.”

The front of each ring — which is noticeably bigger than any of the eight rings previously awarded — features the team’s “B” logo flanked by the words “State Champions,” and includes eight colored stones representing the team’s previous titles and a larger, football-shaped stone commemorating the ninth.

One side features an outline of Boyle County; the other features each player’s name and number.

“It’s just amazing getting the first sight of it,” Brown said.

Some of the seniors who were front and center during the ceremony said they remember sitting in one of the back rows for a similar ceremony following their freshman season.

“It really makes me happy that these younger kids got to experience (this),” Rush said. “It might make them a little more hungry, make them come back next year and try a little bit harder and go that extra mile.”

The Boyle County Quarterback Club raises funds to purchase the rings for the players, coaches, and support staff.

Clark said the ceremony underscores the support the program receives.

“I just think it was so special to have the support of the entire community,” he said. “(To see) so many faces that we’ve seen all our lives growing up, and just being able to make them proud, to make our town proud, it feels great.”