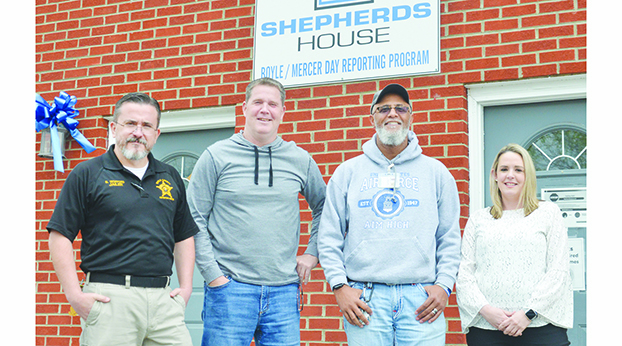 Jail to Job is a new program being implemented through local partnerships and funded by a federal grant to help those with addictions who are incarcerated in the Boyle County Detention Center become responsible, working, taxpaying citizens. This will be the first time that county inmates will be able to benefit from the same type of re-entry services that the state inmates already receive at the jail, said Jailer Brian Wofford.

“The great thing about what we’re doing is, if somebody wants to succeed they’re going to succeed. The only way that this program, that I can foresee, them not succeeding is they actively chose not to do it,” Wofford said. “We’re taking everything that would cause them to stumble, away.”

Jerod Thomas, president and CEO of The Shepherd’s House, which has a non-resident addiction treatment facility in Danville and Lexington explained the Jail to Job program like this — “If you’re a drug addict and a horse thief, and you stop using dope, you’re still a horse thief. So after we get you to stop using drugs and alcohol, we got to stop you from stealing horses, so to speak. That’s what this re-entry program is about. We take care of the substance abuse, but we also spend time training the person, and our goal is to create a tax-paying citizen. We also want to empty his jail,” he said motioning to Wofford.

An inmate can apply for the new Jail to Job program by submitting an application at the jail. They will be interviewed by Shepherd’s House and jail staff, and if they’re deemed a good candidate, their application will be submitted to a judge for approval.

Once OK’d for the program, the inmate will be required to complete a 10-week MRT (Moral Reconation Therapy) curriculum at the jail, designed by the Criminal Justice System, to address drug addiction and “works on the whole person” in order to reduce the chances of that person being arrested again.

The inmate will be released on conditions that they continue the MRT classes at Shepherd’s House and find employment.

And to help with that piece of the puzzle, the Kentucky Career Center is partnering with the Jail to Job program to pay an employer’s first three months of wages for someone they hire who is trying to get back on their feet after being jailed due to addiction issues.

Following the 90-day training period, or 350 hours of employment, the employer can decide whether or not to keep the employee. If they decide the employee isn’t a good fit, then that person will return to Shepherd’s House for another job placement opportunity.
“That way the employer is out no money,” for the employee’s training period, Thomas said. Any business can partner with the Jail to Job program. It could be anywhere from a restaurant, to a convenience store or manufacturer.

If interested in hiring through the Jail to Job program, an employer can contact Roger Fox or Meghan Patrick at the Shepherd’s House at (859) 209-4242.

Thomas said Shepherd’s House Target Case Manager Meghan Patrick and Re-entry Director James Hunn will work with people in the program to obtain their driver’s license, Social Security card, and even their GED if needed. “All that stuff will be addressed. We’ll have those wrap-around services … whatever you need, we’re going to address that.”

And for an extra incentive for someone to be successful in the program, Wofford explained that a county resident who is sentenced to a year in the jail gets accepted into the Jail to Job program, then completes the 10-week MRT course, they will be released, as long as they continue with the program at Shepherd’s House and find a steady job. “They don’t have to come back and finish their time. It’s going to save the county money because now we’re not having to house them for a full year, once they come out and get a job and stay out of trouble.”

Shepherd’s House was awarded the $433,000 re-entry grant over three years from the Federal Department of Justice. “We’re the only ones in the state to receive this grant. It’s federal money… Those are very hard to get. It’s very competitive,” Thomas said.

“The wonderful thing about this grant is that Boyle County, Kentucky; Danville, Kentucky; Mercer County, Kentucky; everybody is watching this,” Thomas said. Every year for the next three years, he will go to Washington D.C. and present the information on how the program is affecting the participants. “If this thing works here, this thing will go live across Kentucky,” he said, even possibly nationally.

Hunn said he is excited for the program to begin, probably by the first of May, which will help the local inmates returning to this community. “We’re showing them that somebody is investing in them. They’ve never had people to say, ‘Your life can change,’ or somebody is going to invest in them.”

He added that the inmates will see, “We’re here to let you know your life can change.” And in turn, “Our community is going to change!”

New medical app will speed up treatment for children