New medical app will speed up treatment for children 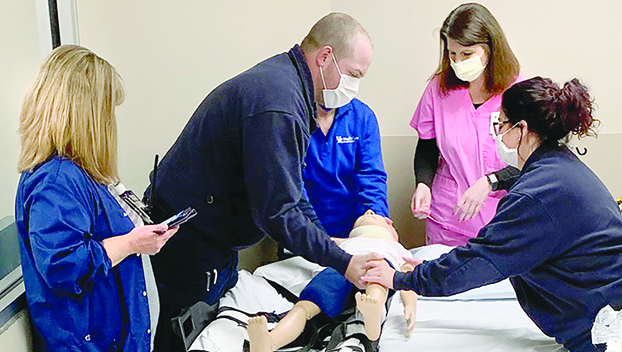 Imagine a 1-year-old child having a severe allergic reaction and not breathing.

Her mom is terrified and wailing. Her dad is trying to keep their other children calm and out of the way.

Emergency staff will start to save the baby’s life — just as soon as several math equations are correctly figured as to how much of a dose of medicine to administer — based on her weight. It’s a process that could take up to three minutes.

But now, a special pediatric emergency program installed on the smart phones of first responders and emergency department staff will cut the time down to no more than 30 seconds and reduce human errors, according to Amber Hamlin, Ephraim McDowell Health’s trauma prep manager and pediatric coordinator for its three area hospitals.

HANDTEVY is the name of the program EMH is implementing within the next couple of weeks, Hamlin said. It’s the same one that Boyle County Emergency Medical Services has been using for a year and PHI helicopter ambulance system has had for about three years. 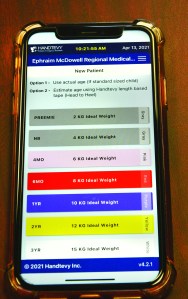 Ephraim McDowell Health is providing all of its facilities’ emergency department nurses and providers the HANDTEVY app which will eliminate the need for the staff to figure math equations in order to administer the proper dose of medication to a child. Photo by Robin Hart

Hamlin said she is working with EMH pharmacy team to customize the app with the medicines and equipment that’s available to the medical staff at all of its facilities.

Hamlin explained that all medicine dosages are administered to children based on their weight, unlike adult dosages which are standard for everyone

Whenever a pediatric patient comes into the emergency room and there isn’t time to weigh the child, a specialized tape measurer is used that show the nurses about how much the child weighs according to its length. “And the nurse has to use math to figure the dosing. Milligrams or micrograms, and convert to milliliters. In that situation, it’s very tense. It’s stressful, and it takes time to figure those dosings out. With this app, those medications will be in milligrams, micrograms, but will also have the concentration that we need.”

Hamlin added, “Something that took two or three minutes to do, will now be less than 30 seconds, which is huge in that kind of situation.”

Also, the app will immediately give the proper medicines, drips, equipment size, electrical voltage, and normal vitals based on the length or height of the child, for example the size intubation equipment to use. “Normally we had to figure that up, now this sets it for you.”

Last week, emergency room nurses and providers from EMRMC, Ft. Logan, and Haggin hospitals participated in training and pediatric emergency simulations using HANDTEVY, Hamlin said. “They loved it. When you’re in those situations, it’s very stressful. We all dread it. We all know, being an emergency room nurse, that’s a possibility every day, taking care of a very sick child or a code situation. Having this is giving them more confidence because they know, ‘I don’t have to stress about the medications and figure out the math.”

Boyle County EMS Director Mike Rogers said they told EMH about the special app. “We have a good relationship with the hospital. We talked to them and showed how it works. They agreed they needed to adopt it system wide. … It’s designed specifically for pre-hospital and hospital use.”

Rogers said the first responders used to have to do the same math calculations when administering medicines to a sick child. “Paramedics had to do the conversions and guess how much the patient weighed  … figure out in your head. It’s simple math, it’s not hard, but can you do it in a stressful environment? You just can’t.”

Rogers said, “The big thing behind this system now is, now when we get dispatched, a 1-year-old patient, cardiac arrest, on the way there, we can pull that app up and write on our hand or piece of tape … the dosages … milligrams vs. kilogram, then 30 pounds, divide and multiply… it’s somebody’s life.”

“And with frantic parents and caregivers, it’s crying and tense. With this system, it gives you all the information in a column.”

Rogers said the collaboration and communications between EMS and the Ephraim McDowell is important as both try to make the entire local healthcare system better. “The patient is the one who really benefits.”

Rogers added, “It really is patient-centered care. We take off our own agency hats and we just work together as a system for whatever is best for the patient.”