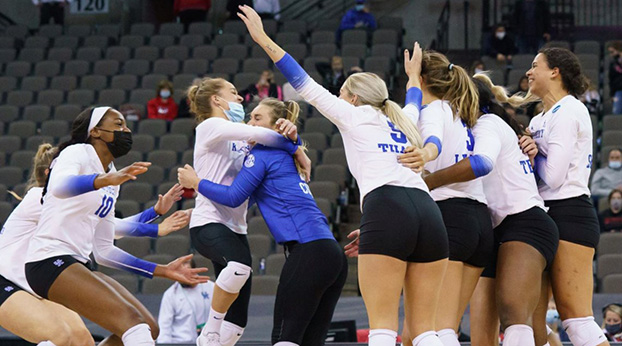 Craig Skinner has built Kentucky into a national powerhouse and the Wildcats are two wins away from winning the school’s first national volleyball championship.

The Wildcats defeated No. 7 Purdue in the Elie Eight on Monday night to earn the program’s first ticket to the national semifinals. Kentucky will take on sixth-ranked Washington on Thursday.

“Getting this done and the first-ever Final Four for Kentucky is an amazing accomplishment for our program and so many players came before are here supporting us and watching it on TV supporting us,” Skinner said. “That was for all the former players and Kentucky Wildcats out there that had been behind us for years.”

The players are savoring the trip to the national semifinals. Outside hitter Alli Stumler collected 16 of her team’s 50 kills in the win over Purdue.

Southeastern Conference Player of the Year Madison Lilley collected 38 assists on 50 Kentucky terminations. She joined Stumler in the double-double stable as she also tallied 10 digs against the Boilermakers.

Earlier this week, Skinner said the Wildcats were prepared for the tournament.

“I think this group of seniors, even at the beginning of the year when we didn’t know if we were going to play or not, had a lot of expectations, so they’ve been dealing with that for a few years now,” Skinner said. “It just seems like it’s the next chapter. Are there expectations? Is there pressure? Absolutely. I think that’s a privilege our players have wanted and want to be a part of.”

The Wildcats have won four straight SEC championships and have reached the NCAA Tournament for the past 15 years.

Tshiebwe is a happy player on and off the…