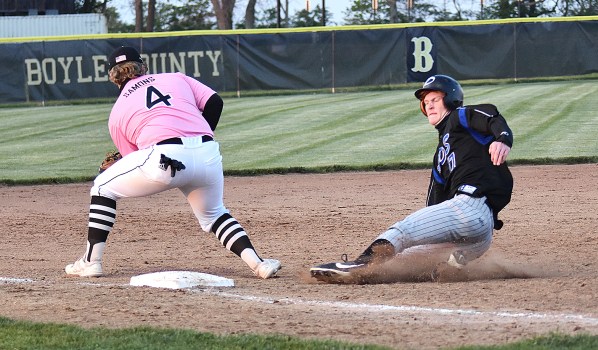 Connor Samons of Boyle County fields the ball at third base as Danville’s Jack Simpson slides in safely. - Photo by Derek Brightwell 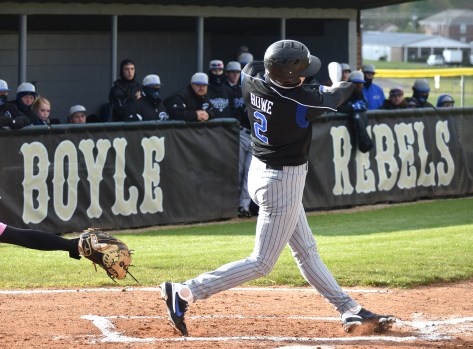 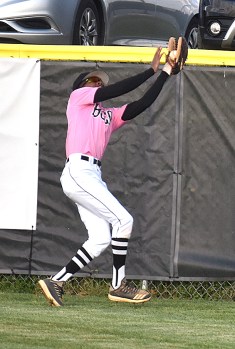 Boyle County’s Sage Dawson hauls in a deep drive at the wall against Danville Wednesday. - Photo by Derek Brightwell 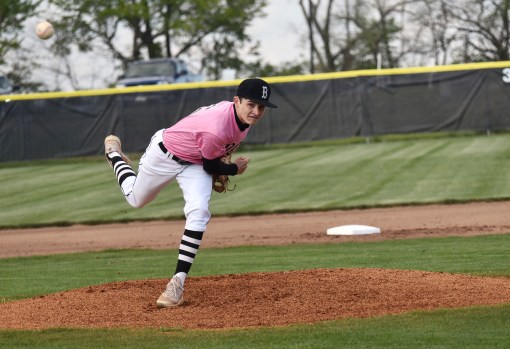 The fans were bundled up on a cold Wednesday evening as Boyle County hosted crosstown rival Danville. And for the first few innings, the Admirals bats were just as cold – although that was more about the performance of Boyle’s freshman pitcher Cameron Owens. But Danville turned it on late for a 5-1 win.

The Rebels jumped out to an early lead after Eli Glasscock roped the first pitch Christian Howe threw into right field for a double. Kamron Myers bunted him over and Luke Gaffney hit a single to drive him in.

After that, Howe and Owens dueled it out for another two scoreless innings.

“Both pitchers threw well. Early on, we were adjusting to what Cam was doing. He pitched a good game – mixed his pitches up and kept us off-balance,” Danville coach Paul Morse said after the game. “Being this cold, it’s a tough day to hit. On days like this, you’d much rather be the pitcher than the hitter. You get a little bit inside, get jammed – things like that make it tough.”

It was Owens’ second varsity start and he went up against a historically good Danville offense that has hit 36 home runs and scored 207 runs this year. Boyle County coach Adam Blair said the freshman wanted the challenge and he certainly lived up to it.

“He’s not a kid who gets rattled. He wants to play tough competition and wants to be challenged,” Blair said. “They’re dangerous everywhere – all aspects of the game. He kept us right there in it until the very end… I’m super proud of him and he’s got nothing to hang his head about. He gave us a chance to win and that’s what his job is.”

Brady Baxter got an RBI double in the third to drive in pinch-runner Riley Lark who replaced Howe on the base paths to end Owens’ shut out and tie the game. In the fourth inning, the freshman walked Brady Morse on four pitches and Blair came out to talk to his young starter before Howe, the Admirals’ leading hitter, stepped up to the plate. Blair left Owens in and Howe smoked the next pitch into left field to drive in two runs and give Danville the lead.

“He was getting tired at the end and asked for one more batter,” Blair said about the discussion on the mound. “I think a kid who’s pitched that well – I owe that to him if he wants the ball. I want that dog in the fight.”

After that, Howe worked quickly and kept the Rebels scoreless and Ethan Wood came in for the seventh inning to shut the door.

All year long, the Admirals have used a combination of top-level pitching and an explosive offense to quickly get on top of teams. On Wednesday, they had to play from behind, but that isn’t something that Morse was worried about.

“This team, getting down is not really a big issue for them. They’re an older team and experienced. They know it’s a marathon and not a sprint. It’s a pretty good offense one through nine,” the manager said. “Today, we still felt good. We were having pretty good at-bats and working the count. We knew were working Cam’s pitch count up. On days where you’re not swinging it as well and it’s cold like this, that’s another way you’ve got to win games. It was good to see the diversity in our offense to do that…They caught one on the warning track in right, another good one late where if it’s not 35 degrees, both of those are probably home runs and that makes the game different.”

The win completes the sweep of Boyle County after the Admirals took care of their rivals at home the day before, 9-4, and gives them a 4-0 record in the 45th district with only next week’s series against Garrard County remaining. But for Morse and his deep, upper-classmen-laden team, just being back on the field was the important thing.

“This is just icing on the cake, especially for those juniors and seniors who had to miss last year,” he said. “It’s just good to be out here, even if it’s 30 degrees. We’ll take it.”