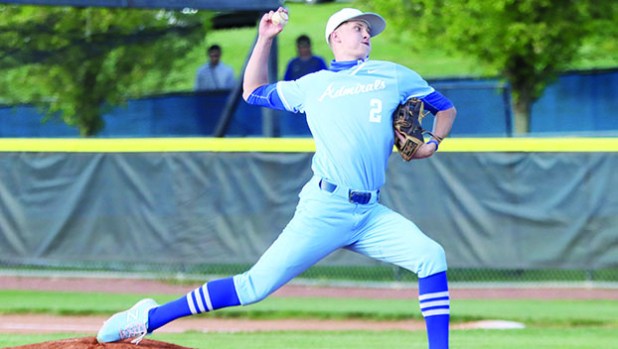 Christian Howe of Danville delivers a pitch. He allowed two first-inning runs, then settled in to retire 12 of the next 13 batters Saturday in the KHSAA state baseball tournament. 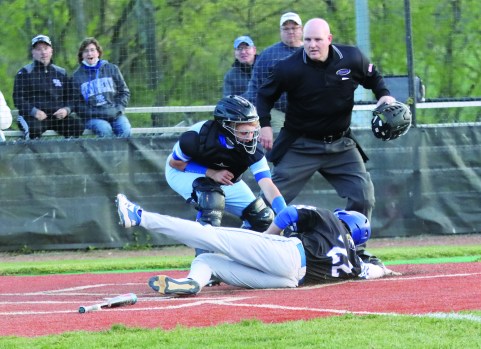 Christian Howe (2) of Danville is congratulated by teammates K.J. Stanfield (23) and Ethan Wood (00) after Howe got a strikeout to end an inning during the Admirals’ 3-2 loss to Lexington Christian on April 16. It was Danville’s only loss so far this season. - Photo by Mike Marsee 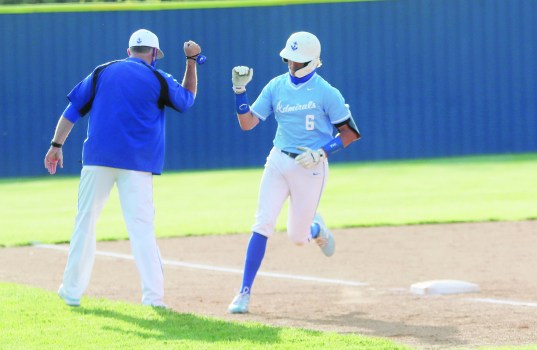 Brady Morse of Danville is congratulated by his father, coach Paul Morse, as he rounds third base following a home run during the third inning of the Admirals’ 9-4 victory over Boyle County on Tuesday. - Photo by Mike Marsee

It isn’t every year that a team like Danville can truly say the sky’s the limit, but this year the Admirals have every reason to aim high.

A wealth of pitching, a deep lineup and the closeness of a core group of players who have played together for at least half of their lives gives Danville advantages that few teams from schools of any size can match.

It is the most talented team Paul Morse has had in his 20 seasons as the Admirals’ coach, and through the first four weeks of the season, that has been evident on the field.

Danville is 17-1 after back-to-back victories over archrival Boyle County this week. It has outscored its opponents 207-26 — that’s 11.5 runs scored and 1.4 runs allowed per game — with 12 mercy-rule wins and nine shutouts.

“It’s a special group, but you’ve got to go out and play,” Morse said. “So far they’ve been doing it.”

The Admirals are ranked fourth in the current Kentucky High School Baseball Coaches Association poll, behind only Trinity, St. Xavier and McCracken County.

“For a small school to be in the same consideration with the Trinitys and St. X’s and those schools … that doesn’t come along at a school with 500 total kids too often,” Morse said.

In the past 50 years, only four truly small schools — schools in the lower half of the KHSAA’s ranking by enrollment — have won state baseball titles. Lexington Christian, the most recent small-school champion, is a private school. The last public school to win the title was Paintsville in 1990, preceded by Somerset in 1974 and Caverna in 1972.

There are many games to be played between now and June 19, when the state champion will be crowned, and there are other teams with stacked lineups and powerful pitching staff that want the same thing Danville wants.

It’s doubtful, however, that any of those teams were any hungrier than Danville when this season began. The Admirals missed out on what was expected to be a good year when the 2020 spring sports season was canceled due to the COVID-19 pandemic, which was a crushing disappointment to them and to athletes across Kentucky.

But they didn’t dwell on their disappointment. Instead, they began working almost immediately toward the 2021 season.

Christian Howe, one of seven seniors on the roster and one of two Division I signees, said the work began “pretty much the day after everything got shut down,” and he said the loss of last season actually led to them becoming a better team.

“I haven’t seen people work that hard,” Howe said. “We showed up pretty much every day. We couldn’t come practice up here (at Admiral Field), but we’d go to somebody’s house and everybody would practice. I think we worked harder than we ever have before, really. We saw a lot of guys make huge jumps last year.”

Many of Danville’s players competed together during the summer travel season, as they have for much of their lives.

“So It didn’t feel like we completely missed last season,” Howe said.

Both Morse and Howe said the time these players have spent together on the field for so many years has resulted in a very closely knit team.

“This team is a group that’s mainly played together since they were 7 or 8 years old. They go out to eat, they hang out together with each other, they’re at each other’s houses all the time,” Morse said. “I’ve had other teams like that in the past, but you add that aspect to … the talent, and you have a chance to be something special.

“You still have to have the talent, but those intangible things that go with it make a difference. They love to play, they have fun, they like to be with each other. And they’re all about baseball. They’re serious about it. That’s what they want to do, and they’ve been focused on what they want to do for a long time.”

Howe said there are high expectations and high goals that the players are aware of, but the dugout is not a high-pressure environment.

There was one last week. Danville lost to No. 6 LCA 3-2 on April 16 in an All “A” Classic sectional game, the first game in which it was held to fewer than six runs and only the third in which it allowed more than two.

But the Admirals recovered quickly, beating No. 10 Frederick Douglass and No. 22 Tates Creek the next day, then putting up a pair of wins over Boyle, 9-4 on Tuesday and 5-1 on Wednesday.

Danville is powered by pitching, with more than enough to get through the three-game gauntlet of a regional or state tournament.

There are five pitchers — two seniors and three juniors — who have thrown at least 11 innings each, and each has an earned-run average under 2.00.

A sixth pitcher, junior Jack Simpson, is on his way back from a shoulder injury and could be pitching within a couple of weeks.

“We do have some pitching,” Morse said. “It’s a great luxury to have, and we don’t take it for granted.”

Howe, who plays third base when he isn’t on the mound, said having so many capable arms takes the stress off both the pitchers and the rest of the defense.

“We’ve got five or six guys that we can put out for district games. It takes a lot off your shoulders, and you can play and just do the best you can,” he said.

Then there’s the powerful lineup, which didn’t get the kind of preseason notice that the pitching staff has.

“Everybody talked about the pitching coming into the year,” Morse said. “It was all I heard about all fall and all winter, and early in the spring,” Morse said. “(People said), ‘You’ve got five Division I arms, but are you going to be able to score enough runs?’ To myself, I’m like, ‘We’ll see. We’ll see.’ But I knew deep down that those guys, they can play and they can swing. This has got to be the deepest lineup I’ve ever had.”

Morse noted that there are even players in the last couple of spots in the lineup with three or four home runs, and Howe said that depth is another thing that sets this team apart.

“We’ve had teams my freshman and sophomore year, we could hit one through four or five, but this year I think anybody on the team can hit the ball,” he said.

Morse said that’s one of the many assets at Danville’s disposal.

“From a sheer talent standpoint, it’s the most talent I’ve ever had.”

But will that talent translate to postseason success? Danville hasn’t won the 12th Region since 2009, and its goals for this season don’t stop with a regional title.

Morse has made a schedule that will test the Admirals in more ways than one. There are weekend tournaments with quality opponents, including the Louisville Invitational this weekend and Danville’s own tournament next weekend, and back-to-back games are a regular occurrence on a slate with more than 40 scheduled games — some of which will surely be canceled along the way.

“You’ve got to face that kind of competition if you want to make a deep run in the postseason,” said Morse, who later this season could join a group of 31 coaches who have reached the 500-win mark.

Meanwhile, the veteran coach is trying to take time to take in this special season.

“You want to soak it in as much as you can, for sure,” Morse said. “I have to tell myself that: ‘Hey, you’ve got to soak this in some, too, and take in this group. But you also have the daily grind, and these guys like that daily grind.”