Justus looks back, sees ‘opportunity of a lifetime’ as he leaves for Arizona St. 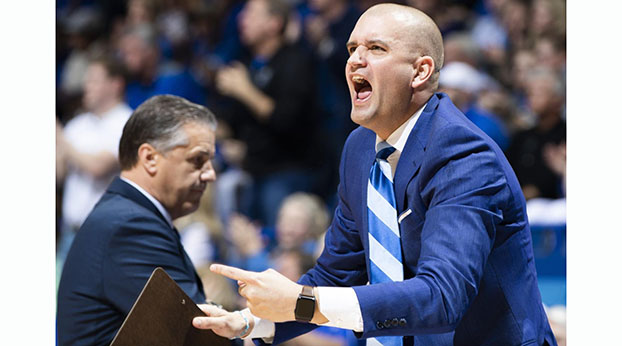 As expected, Joel Justus has accepted a coaching position at Arizona State.

Justus, who has spent the past seven seasons at Kentucky, came to Kentucky after serving as a head coach at Davidson Day High School in North Carolina and as an assistant coach at Elon University from 2004-08.

During his stint with the Wildcats, Justus was part of 187 victories, five NCAA Tournament appearances, including one Final Four berth and four Southeastern Conference regular-season and tournament championships.

“It is hard for me to believe that my time at Kentucky has come to an end,” Justus said. “The memories I have of this place, the players I have been for fortunate enough to coach and form lifelong relationships with, and the honor I have had to coach at the winningest program in college basketball is something I will never take for granted. It has been the opportunity of a lifetime.”

Kentucky coach John Calipari said Justus will be missed. He was instrumental in the development of Shai Gilgeous-Alexander and other former UK players during the past few years.

“He had my blessing, but I want to make sure we all recognize that we are losing someone who was a big, big part of all our success over the last several years,” Calipari said. “From Shai Gilgeous-Alexander to Keldon Johnson to Immanuel Quickley and others, Joel was not only the point guy with some of our players who became special, he helped develop them, teach them, and challenge them. Joel is one of the top young assistants in the country who I believe will make a heck of a head coach someday soon. I wish him the best and I will always be a great supporter of his.”

Justus, named one of the top assistant coaches in the country last year, is looking forward to adding to his resume at Arizona State.

“This was a challenge and an opportunity at Arizona State under Bobby Hurley that I felt like was in the best interest of my career as I continue to chase my dreams in the coaching profession,” he said. “Coach Hurley was an icon and a role model of mine growing up, and to have the opportunity to learn from him was something I just couldn’t pass up, similar to when I began this journey seven years ago under a Hall of Fame coach in John Calipari.”

Hurley is looking forward to working with his newest assistant coach.

“Joel’s experiences working at Kentucky for the last seven years are invaluable,” he said. “He checks all the boxes in what you look for in a high-level coach. I am really enthusiastic about the opportunity to work together and further advance Sun Devil Men’s Basketball.”