Vaccination demand plummets for second week in a row 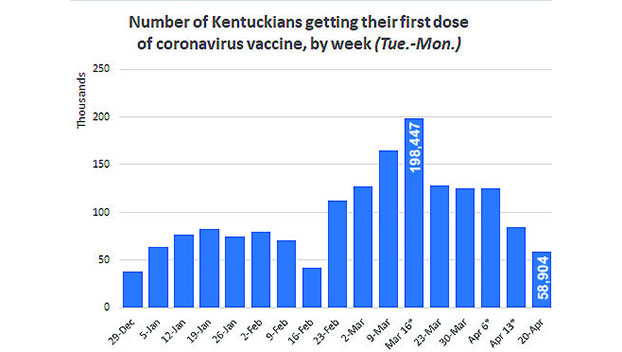 Kentucky used less than 40 percent of the coronavirus vaccine doses it received in the last week, and the number of vaccinations declined for the second week in a row.

Those numbers stood out more than those on the daily pandemic report, which showed slight increases in new cases and the positive-test rate.

“Every day, we get a step closer to reaching the 2.5 million-vaccine Team Kentucky Vaccination Challenge and ending this pandemic once and for all,” Beshear said.

The governor has said he would lift all capacity restrictions once 2.5 million Kentuckians have gotten at least one dose of vaccine. On Monday, when he largely lifted his mask mandate for vaccinated people who are outdoors, he noted that vaccinations are slowing and “We will probably do things more incrementally.”

The state’s daily vaccine report showed that in the reporting week that ended Monday, about 59,000 Kentuckians got a first dose. That was 31 percent less than the approximately 85,000 the previous week, and less than half the 125,000-plus in each of the two weeks before that.

The previous week, the state used 54% of the doses it received. Last week, it used only 39%, though supplies were slightly lower because of the pause in shipments of the Johnson & Johnson one-dose vaccine.

Because the other two vaccines require two doses, the J & J vaccine has been the most popular, but now experts and officials fear it will be in less demand because of the very rare blood clots that led to the pause. The vaccine now carries a warning label for women of childbearing age.

The decline in vaccine demand has prompted many vaccination sites to take walk-in patients, not just those with appointments.

“There are now more options than ever for you to sign up for your shot of hope,” Beshear said. “It’s fast, it’s easy and it will help us save lives and get back to more of the activities we’ve missed over the past year.”

The Centers for Disease Control and Prevention issued masking guidance similar to Beshear’s. President Biden touted it, saying “If you’re vaccinated, you can do more things more safely, outdoors as well as indoors. . . . This is another great reason to go get vaccinated now. Now!”