Volleyball championship worth wait for Wildcats 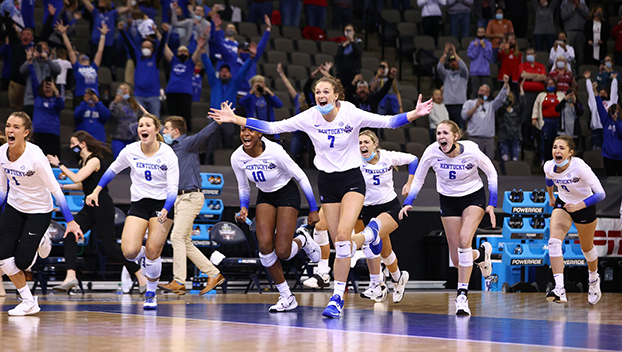 The University of Kentucky needed a breakthrough and the volleyball team delivered.

For more than a year, the school has navigated through an ongoing pandemic, which created months of uncertainty and hardship on the players and staff. Those tense moments resulted in some untraditional methods, such as COVID-19 protocols on a weekly basis and dealing with schedule changes. Volleyball, which is traditionally played in the fall, was postponed until spring.

For the Wildcats, it was worth the wait as Kentucky defeated Texas in four sets on Saturday night to claim the school’s first national volleyball title. It also marked the first time a Southeastern Conference program has claimed the feat in the sport. The volleyball team became the fifth program to win a national title, joining men’s basketball, cross country, rifle and cheerleading.

“The sacrifices and the hours put in, the extended season – I think it means 10 times as much,” said Kentucky setter Madison Lilley, who was named the Most Outstanding Player. “I can’t even put enough stress on that. This has been a grind to say the least and I know now sitting here, it has all been worth it and even more.”

The Wildcats also were focused and persevered while playing with heavy hearts, mourning the death of former Kentucky men’s basketball player Terrence Clarke, who died in a tragic automobile accident Thursday in Los Angeles. Clarke was just 19 and had declared for the NBA Draft last month.

The players handled the pressure of winning the title with ease, even after dropping the first set to the Longhorns. The Wildcats settled in and won the final three sets against Texas, which had been there and done that, winning three national titles in the process.

“We just stayed the course,” Kentucky coach Craig Skinner said. “We talked before the match. We don’t know how it’s going to start. But I know one thing — you’re going to fight to the bitter end. And I think that was the difference. We get motivated for sure when teams don’t let us do the things we want. Credit our team for just staying the course.”

How impressive were the Wildcats? Longhorns coach Jerritt Elliott heaped praise on Lilley following the contest.

“Their setter is phenomenal,” he said. “She’s probably one of the best setters I’ve seen in college ever.”

When he arrived at Kentucky more than a decade ago, Skinner envisioned winning a national championship and took it step by step before finally reaching the proverbial pinnacle.

“You’ve got to get certain stages before you can have that chance,” he said. “All along, we were not going to compromise the way we did it and doing it the right way and being honest and direct and open and caring, you know, all that for our players and recruiting. And this staff was amazing this year.”

It truly was an amazing season for the Wildcats and Skinner hopes the success will carry over into next season and beyond.

The realization of reaching the pinnacle of the sport came Saturday night and the stage is already set for more.