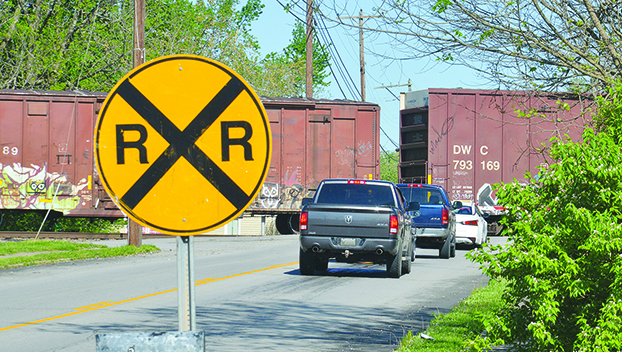 Junction City has always celebrated its history associated with railroads. But these days the trains are becoming problematic for first responders, school bus drivers, and others who live and work in the area.

Wesley said one example of the problem was demonstrated during incident that happened last week.

A wreck occurred on White Oak Road when a vehicle ran off the road and struck a home’s front porch where two people were sitting. They were OK, but the driver’s passenger was injured.

The ambulance had to turn around, drive back to Danville, turn left on U.S. 150 (the Danville bypass), turn left onto Stewart’s Lane and head back to Junction City in order to help the people at the accident scene.

“It does take a lot longer,” Wesley said. “You’re right there and you probably can see the accident, but you can’t get to it because of the train.”

Wesley said first responders never know when a train will be blocking a road. “It’s the only variable that we can’t take into account, if there’s going to be a train stopped there. … EMS doesn’t keep track of where the trains are. We assume there’s always going to be a train. So we try our best to work around it. Like I said, that’s the only variable that we cannot account for.”

Faulkner Station Road is another problem area, Wesley said. He was talking to a firefighter who lives in the area and he said trains block that road “at least three or four times a day…” Wesley explained trains normally stop to refuel near Danville, and the extended length of trains is what is now blocking roads regularly.

Junction City Police Chief Russell Preston said he also tried to reach the accident last week when both crossings were blocked. He said he sat for about 30 minutes waiting to get through. Eventually, he had to turn around and continue patrolling this side of town, he said. He’s learned that when a train blocks him on one end of town, “they (some residents) show off on the other end.”

He said it can take him and emergency crews such as the local fire department about 15 extra minutes to go back to Danville and return to Junction City via Stewart’s Lane. “In a life crisis, minutes matter,” Preston said.

District 2 County Magistrate Ronnie Short is also experiencing first-hand the problems when the longer trains stop outside of Junction City to refuel.

Short drives a school bus and is caught nearly every morning.

“It’s always been a problem,” Short said. “But trains have doubled in length. They used to have about 50 cars. Now they have over 100 cars,” he said, and they have engines in the middle helping to pull the load, he added.

“The trains here lately are really, really long.” So even if they haven’t stopped for refueling or mechanical problems, the longer trains can block both crossings in Junction City at the same time for longer periods of time, Short said.

For example, this past Friday after he had dropped off all the students in the afternoon he was stuck for about 45 minutes on Shelby Street as he was trying to get back to the school. Eventually, other drivers had backed up and turned around, which allowed him the space he needed to do the same, he said. “I was there forever. It was the longest train I’d ever seen there.”

Short guessed the train must have been stopped for at least an hour.

Short also said when trains block the intersections in the mornings and afternoons, bus drivers are late getting their students to school and back home.

“We have to redo all the routes,” he said.

“It’s happening more and more often. They’re pulling trains miles long and it takes them too long to get across the crossings. And this thing of stopping one … a lot of times they’ll stop and there’ll be one car blocking the crossing. That’s uncalled for.”

Representatives from Norfolk Southern Railroad were contacted but have not responded to questions regarding the issues as of press time.

Reasons for COVID-19 vaccine hesitancy are many in Kentucky

In a society that gives out trophies for participation, it’s only natural that the U.S. is celebrating that about a... read more