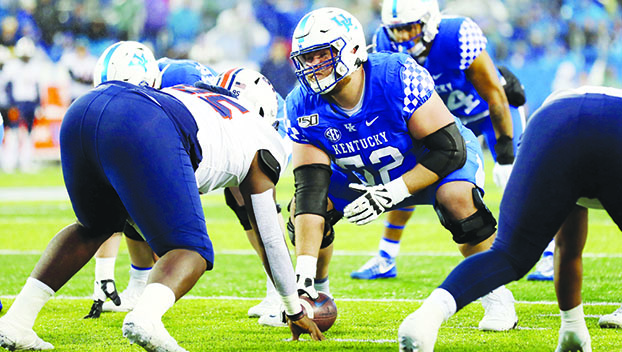 Let’s just say he was not the least bit happy.

“Drake for 3 1/2 years has blocked some of the best defensive linemen in the country and whipped their ass,” said Marrow. “I was a little pissed.”

Jackson was named the most valuable center returning to college football before the 2020 season by Pro Football Focus. SEC Network/ESPN college football analyst Cole Cubelic rated Jackson as the best center in the Southeastern Conference.

Last season he graded at 85 percent in 10 games and missed just one assignment in 627 snaps. He had 38 knockdown blocks and led the team with 167 blocks at the point of attack. Those were reasons he earned all-SEC honors but it wasn’t enough to make him the first UK center drafted since 1988.

Instead, he signed a free agent contract with the Detroit Lions where he’ll join former teammate Logan Stenberg, an offensive lineman picked in the fourth round by the Lions in 2020.

It did not surprise Marrow that the Lions signed Jackson based on pre-draft conversations with Chris Spielman, special assistant to the owner and CEO of the Detroit Lions.

“Chris told me they wanted him and if he wasn’t drafted they would still pay him sixth- or seventh-round (draft) money,” Marrow said. “They loved his toughness. Drake is a scrapper. They actually wanted (UK tackle) Landon (Young) and Drake both. I told them if they didn’t take Landon in the fifth round they would not get him (Young was picked by New Orleans in round six).”

Marrow said Jackson’s toughness is a valuable asset for any team along with his competitive attitude. Kentucky beat six ranked teams during his time at UK.The Cats also ended a 31-game losing streak to Florida with Jackson at center and won at Tennessee for the first time since 1984 with him starting.

Marrow has no doubt Jackson, who earned a master’s degree in kinesiology and health promotion in December, will make his mark in the NFL.

Former UK all-SEC running back Anthony White said Jackson’s size (6-2, 293 pounds) probably hurt his draft stock. So did getting injured in the Senior Bowl and not being able to fully participate in UK’s Pro Day.

“But he still had plenty of film out there for teams to see,” White said. “Drake is a baller. He’s a fighter. He’s undersized but he has a great football IQ and can be your quarterback in the offensive line that teams need. I think he’ll fit his spot in the NFL, too. Not getting drafted won’t discourage him. He’s always had to prove he could play and he’ll do it again.”