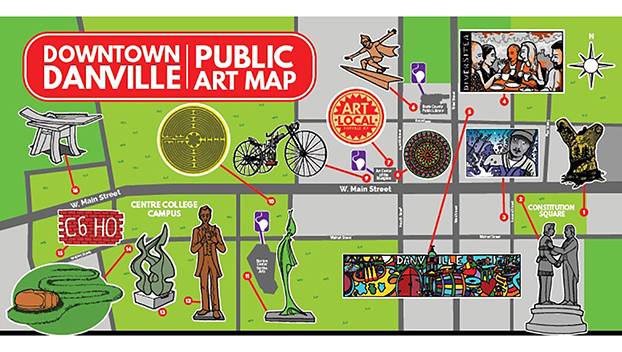 The Art Center of the Bluegrass is celebrating Danville’s arts identity with a new public art map of the downtown area. The printed map highlights 16 pieces of public art that are found within the downtown historic overlay and on the Centre College campus. The pieces date from the 1920s through the present and represent a range of media, from paintings to metal sculpture to glass mosaic.

Executive Director Niki Kinkade says the Art Center is thrilled to showcase Danville’s public art traditions. “Public art plays an important role in defining a community’s identity,” says Kinkade. “And Danville has a lot of art to be proud of!”

The public art map starts at Constitution Square, where visitors will find the Governors Circle, a ring of bronze plaques and seasonal flowers celebrates the former governors of Kentucky. The central “United We Stand” sculpture built by George F. Yostel in 1981, commemorates the drafting of the Kentucky State Constitution in 1792. Nearby is “Two Ways In,” a hand-carved tree by Buck Graham that depicts the natural features of the region. The piece also serves as an interpretation of the Wilderness Road, the early road that led settlers to Danville.

Across the street from the park is the Bunny Davis mural, a painting of the Danville icon, who throughout his life broke racial barriers and achieved great success as a leader in sports, business, and government. The mural was painted by Ryan “ARCY” Christenson in front of a live audience during the Soul of Second Street Festival in 2018.

2018 was a good year for public art in Danville! Continuing down Second Street, visitors will discover the 2018 Diversitea mural on the side of the Elmwood Inn Fine Teas building. This mural, celebrating diversity (as well as tea), was painted by muralist Dee Craig of Belfast as part of Danville Sister Cities Commission artist exchange program with Carrickfergus, Northern Ireland.

The third mural created that year can be found on the side of 126 N. 3rd Street. This mural by Andee Rudloff features colorful renditions of many of the things that make Danville unique. It was created with participation by more than 500 community members.

The Boyle County Public Library is home to several art pieces in the Karl Benson Park, located at the corner of Broadway and Fourth Street. It features seating areas, a fountain, and several bronze sculptures by artist Gary Lee Price.

A short walk from the library brings visitors to the Art Center of the Bluegrass, home of three pieces on the public art map. The most iconic is the Treble Cycle sculpture, installed in 2006. While it looks like a functional antique motorcycle, this mixed-media sculpture by Mike Welch is made entirely of repurposed materials.

The Color Wave mosaic mural is installed on the Fourth Street entrance ramp to the Art Center. It was created in 2019 by artist Tracy Pennington who collaborated with students from Kentucky School for the Deaf and joined their mini mosaics into a unified whole. The final discovery at the Art Center is the Art Local mural, which celebrates the local art scene of Danville.

The oldest piece of “public art” on the map is the C6H0 graffiti on the Centre College campus. The letters were painted in celebration by Centre students when the Centre Colonels toppled Harvard in a game of football in 1921.

The score: Centre 6 – Harvard 0. The victory has been described as “one of the greatest upsets in sports history.”

In addition to that piece of honorary public art, the Centre College campus is home to five additional sculptures, including a statue of Abraham Lincoln, a scarab beetle atop a serpent mound, and three abstract metal installations.

Directly adjacent to the campus is the Pathway of Peace Labyrinth at The Presbyterian Church of Danville. Based on the labyrinth at the cathedral in Chartres, France, this labyrinth invites visitors to walk the path as an exercise in meditation and prayer.

In addition to the 16 pieces of public art (in that they are publicly visible at any time), the map also includes icons directing visitors to several pieces of glass art by Stephen Rolfe Powell. His work can be found at Art Center of the Bluegrass, the Boyle County Public Library, and the Norton Center for the Arts on the Centre College campus. Although all three spaces are open to the public, visitors should check with the organizations to confirm their hours of operation.

The public art map was created with the support of the Danville Boyle County Convention and Visitors Bureau. CVB Director Jamee Peyton says, “Danville’s art community has expanded beyond our borders and touches a diversity of people across the state. We are proud to now offer a resource that is yet another addition to our vibrant growing arts experience.”

Maps can be picked up from the Art Center and CVB offices. There is also an interactive digital version available on the Art Center’s website – www.artcenterky.org/public-art-map. Both versions of the map include numbered icons directing visitors to the various art pieces, along with a description of the work. The web version is optimized for viewing on a mobile device.

The Kentucky Beef Council Kentucky’s 38,000 beef producers will celebrate beef during the month of May, as the state legislature... read more