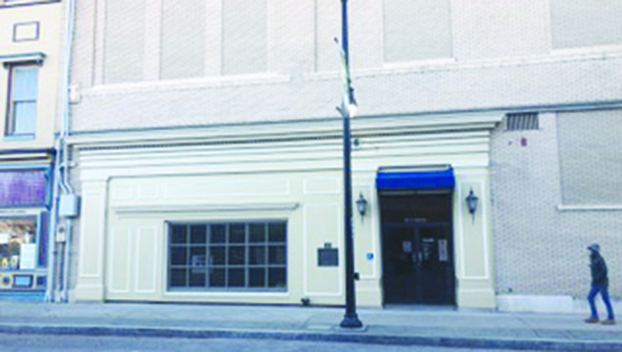 This is the space where Kate Snyder's children's bookstore Plaid Elephant Books will be. This photo is from before paneling was removed to reveal a door to the left of the window. - Photo submitted

At 116 N. Third Street, there stood an underutilized building that had been part of the loan department of Chase Bank and more recently was an office for symbiotics. Soon, it’s going to be the home of Plaid Elephant Books, a children’s bookstore Kate Snyder is opening later this year.

The building will also house an art studio, since Snyder is a mosaic artist and wants to host art classes for adults and children.

The Heart of Danville found the space, since they keep track of underutilized buildings downtown in hopes potential businesses will revitalize them.

Lisa Thompson is the chair of the economic vitality committee for the Heart of Danville and also the manager of the national register of historic places program for the state with the Kentucky Heritage Council. She said the Heart keeps track of underutilized spaces, meaning storefronts occupied by something other than, for example, retail or restaurant spaces. It also keeps track of what potential businesses are looking for in a space, like square footage, entrances and other factors.

With those things in mind, Thompson said she and Board Chair of Heart of Danville AnnYager McCrosky went to the building at 116 N. Third Street and Thompson noticed it was the same square footage as what Snyder wanted for her business, 2,000 square feet. So they wanted to see if it could be turned into a retail space.

In looking around, Thompson also noticed some paneling she thought likely was covering where a door had been. Thompson said it’s a fairly common practice when elements of a building are no longer needed for property owners to cover up where the elements were instead of taking them out.

She could tell that behind the panel was a door opening. She said the only other entrance to the space was through a hallway, so the door opening would provide a way onto Third Street directly. 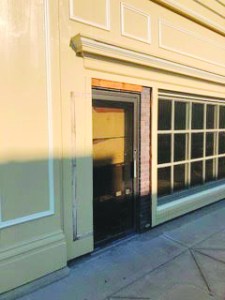 Photo from after paneling was removed, revealing the building has an old door, at the building where Kate Snyder’s children’s bookstore, Plaid Elephant Books, will be. – Photo submitted

Since the Heart of Danville is a “nationally accredited” Main Street program, one of the benefits it’s eligible for is free design assistance from the staff architect at the Kentucky Heritage Council, Thompson said. So she reached out to them, sent photos of the building’s facade that was covered up and received a drawing of what the building would look like had a door been there.

Thompson shared the drawing with the city to make sure it met design guidelines, then with Snyder and the property owner. This gave the ability to visualize what was possible, and then Snyder signed the lease for the building.

The property owner then had workers remove paneling, and there was a door behind it. It was a ‘70s metal door frame, which they replaced with a wooden door to complement the building’s windows.

“It’s one of those examples where working with our partners, whether it’s the Kentucky Heritage Council, the city — that the Heart of Danville was really able to show what could be done,” Thompson said.

Snyder is painting the door a “bright, fun color,” Thompson said, which will make the space “pop.”

“The whole key to what the Heart of Danville tries to do is support our businesses,” Thompson said. “By activating that storefront, it will create a much more vibrant sidewalk, and it’s really a win-win for both the building owner and for Kate.”

In addition to the door change, some of the interior walls of the buildings were taken out to open up the front of what will be the bookstore.

The building is from around the early 1900s, Thompson said.

“The buildings within the district are significant for their late 19th and early 20th century commercial architecture,” Thompson said about the history of the district the building is in. “The style, scale, and workmanship of these buildings covey a sense of place.”

McCrosky said it’s been exciting watching the building begin to take on new life, in a space where before there wasn’t much activity and it wasn’t a well-known space in town.

She said downtown Danville is currently at a 25% vitality, meaning vital businesses, which are ones where you can walk in and buy something, like a restaurant or retail space, are low in number compared to how many storefronts there are downtown.

“The more business buildings that we can take that are underutilized and activate them, at the moment, just creates a more thriving and vital downtown for us, which increases our community,” McCrosky said.

Increasing the vitality rate would also lead to more businesses opening downtown, she said, so revitalizing a building is a step forward.

About where Plaid Elephant will be, McCrosky said, “I get excited every time I drive by.”

Ben Clouse spent 34 years playing softball, and after retiring, he and his son, along with his son-in-law, found themselves... read more