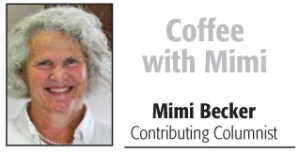 Years ago, when we would be planning a road trip with our family, one of the first tasks was to get a road map from a travel club.

I love maps of all sorts. I have saved them from trips all over the world. I have a large framed one of Europe which is illustrated with little people wearing national costumes. I have city street maps. Sometimes the maps got me where I was headed on foot. Sometimes they didn’t.

In Tokyo, a map was useless to me, given my lack of necessary language skills. Were it not for a very astute and kind lady, I could still be wandering around just a couple blocks from my subway stop.

I really loved those travel maps for road trips. If you belonged to the travel club, you could order a road map compiled for your specific trip. You just called them up, told them where you were going and from where you would depart and, by magic, you would get your very own personalized trip map.

The map was actually a flip book with pages and pages of maps in the correct order. Your specific route was highlighted on the pages as the map guided you mile by mile your destination.

Or close enough to it that most anyone could land at the planned destination. Mostly that worked, but Washington, D.C. was tricky in the dark and rain and that is a story for another day.

The maps even included enlarged and detailed routes in special fold out pages when the route took a traveler through a large city with multiple interstate interchanges and exits. Mostly that was helpful, but Washington, D. C….

The travel club maps were an essential element of a hassle-free trip. They reduced to a minimum the inevitable frustrations of the huge fold out maps with tiny print. To the navigator, when distracted by a 3-year-old child in the back seat, these maps were not at all helpful when the necessary exit was missed thus causing testy words between the navigator and the driver. Often necessary information was located right in the fold of the map which, after numerous foldings and unfoldings of the map, was obliterated in a crease.

I was always the map keeper. This was not a role relegated to me because that is what the mom does, well maybe partly. I loved minding the map. There was great satisfaction in flipping the pages from one section to the next.

We had successfully traversed that part of the journey and were that much closer to the final destination.  A matter of extreme importance with three small children, or teenagers, in the back of the car.

The map packet also included mileage notations, rest stop notations, and warnings of potential, perennial, road construction slowdowns. Again, extremely useful information when traveling with just about anyone else in the car.

Those road maps are fond memories.

However, they are a done and gone. My collection of paper road maps is filed away somewhere.

The greatest thing ever invented for road trips is GPS.

I don’t leave home without it, almost ever. I have been known to type in an address I have visited often and set the Google Map to work just because it does and I can. Last week, on a drive to another town, on a road with which I am very familiar, to a location I had just driven to the day before, I missed a turn. I had left home without my guide in action. Driving on the wild side.

Not a tragedy, but a reminder that I so often rely on the voice on the phone that I let my own mind wander. I know that confident voice will remind me that I turn left in 600 feet. If I decide to vary the route for a cup of coffee, she will try valiantly to warn me of my waywardness and how to address the issue. I will actually tell her not to worry, I’ve got it under control, while she begins to recalculate how I can save myself.

I have a family member, who I suspect, has never accessed the wonderfulness of GPS. He has all his life, since the day he got the freedom of a driver’s license and access to a vehicle, travelled the back roads. Fortunately, he has a great sense of direction and never minds a wrong turn here and there. In return he has discovered some truly amazing little spots.

On a drive recently, on a day when I had not a spare minute in the schedule, I found myself on one side of a rural county needing to be in another county with one in between. For practicality, I plugged the address into the GPS and hoped for a consistent signal.

I followed the twists and turns as directed.

What a treat. Without worry, I ended up where I was headed and along the way enjoyed some beautiful scenery on an absolutely gorgeous spring day.

There is an option for a scenic route. Take it if you can.

A tiny piece of life