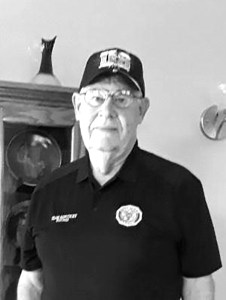 Earl Belcher Sr, 82, died May 10, 2021 in Lexington, Kentucky. Born June 20, 1938 on Copper Creek in Rockcastle County, he was the son of the late David and Lou Vena (Wilmot) Belcher. Earl grew up in Crab Orchard and enlisted in the Navy right after high school. In 1967, he left the Navy and moved his new family to Bucks County, Pennsylvania where he began his career in injection molding (plastics). Earl answered the call of service yet again in 1974, enlisting in the Air Force Reserve and serving until 1992, capping a 33-year military career.

Earl and Jo Anne moved to Harrodsburg in 1997, where he worked at Hitachi until his retirement in 2002. His love of our country led him to join American Legion Post 46 in Boyle County where he served in various positions for over 16 years, including Post Commander. Earl volunteered at Danville Humane Society with two of his grandchildren, Nicholas and Lindsay, facilitating pet adoptions for many years. Earl was an active member of Saints Peter & Paul Catholic Church in Danville. Father, brother, husband, grandfather, Patriot, Christian, pet lover; Earl was a wonderful role model who leaves behind a powerful legacy for the family he loved so dearly.

Memorial Mass will be held 12 p.m., Tuesday, May 18, 2021 at Ss. Peter & Paul in Danville. Father Anthony will be the presiding celebrant. Burial will be at Camp Nelson National Cemetery at 1:30pm. Visitation will be held prior to mass from 11 a.m. to 12 p.m., Tuesday, May 18, 2021 at Ss. Peter and Paul. Memorial donations are suggested to http://www.lexingtonavenue.org/soups-on-us/. The online guestbook and our Hugs from Home program are available at www.stithcares.com.