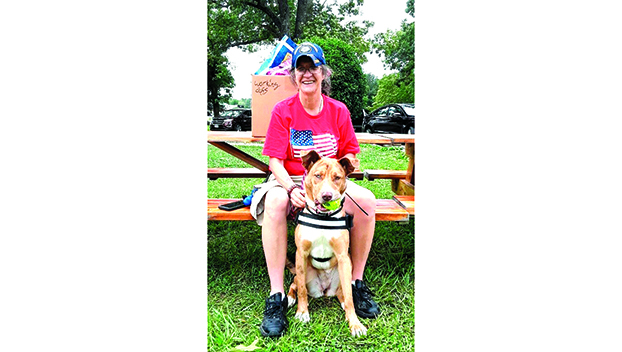 Veteran Mary Welsh is pictured with her service dog, Fenway, who helps wake Welsh when she has night terrors, reminds her to take her medication and helps her with anxiety, among other things. Fenway was trained at Northpoint Training Center through the Working Dogs for Veterans program. - Photo submitted

At Northpoint Training Center, there’s a space for inmates who are military veterans, and these inmates have been helping to train service dogs for disabled veterans to remind them to take their medicine, alert someone if they have an incident, help them with mobility and, in addition to other help, provide them with companionship. This is through the Working Dogs for Vets nonprofit organization, which is based in Lawrenceburg, Tennessee.

Cheri Carbone is head trainer of Mutts with Manners and WDFV at Northpoint. She said Northpoint became involved in WDFV just before the COVD-19 pandemic, so all of the classes with the inmates have taken place over Zoom.

“That has been challenging for everyone, but we figured it out, and we’re able to do the Zoom classes, one class for Working Dogs for Vets and one for Mutts with Manners once a week, and the guys keep continually working on what they’re supposed to until my next classes, and they can show me what they’ve taught the dogs,” she said.

They’ll teach the dogs lots of tricks outside of regular training, too — for instance, inmates taught one dog from Mutts with Manners how to open a cooler to retrieve a can. They also taught the dogs how to wipe their feet under Carbone’s instruction, something Carbone said would be useful for the WDFV dogs too, since some disabled veterans may have mobility issues and not be able to bend to clean a dog’s paws.

She said mobility dogs can also act as a “cane” for veterans to help them stand and brace themselves, using the dogs’ shoulders as support. WDFV is very cautious about this, she said, since if the veteran were too heavy, the dog could be hurt. So WDFV uses the veteran’s weight and the dog’s size and calculates how much pressure the dog could withstand without hurting the dog.

If a veteran has post traumatic stress disorder and suffers from night terrors, a trained dog could wake them up or lie across them, depending on the severity of the terrors, Carbone said.

The dogs can also provide other support, like picking things up and handing them to the veterans if they have mobility issues. Also for example, if a veteran has a traumatic brain injury, has a “brain fog” and wanders off, the dog could find a spouse or family member to come and help the veteran, Carbone said.

Another thing inmates teach dogs is to be able to remind veterans to take medicine, which they teach by setting an alarm, going to a counter once the alarm sounds, pretending to take medicine and giving the dog a treat. The dog establishes a “body clock” this way.

The dogs also help with companionship, Carbone said. If a veteran with PTSD is essentially homebound and doesn’t want to leave the house, a service dog can help give more of a sense of security and be a friend.

“They get braver on doing things,” she said. 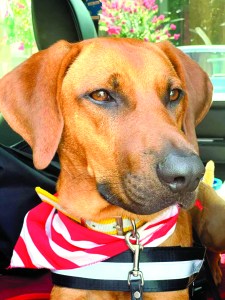 This is Yobi, a dog trained through the Working Dogs for Veterans program at Northpoint Training Center. Cheri Carbone, head trainer for WDFV at Northpoint, said when her assistant fell on the ground faking a fall and yelled “help,” Yobi took Carbone right to her and braced his body so he could help her to her feet. He was eventually paired with a veteran. – Photo submitted.

Carbone said founder of WDFV Kenneth Knabenshue, a veteran himself, is “there for vets through anything.”

“It’s a whole lot that they’ve got on their plate and what they started, because there’s a lot of problems out there,” she said about issues that veterans face, like suicidal thoughts.

The organization is growing quickly, she said. It was started to connect disabled veterans with service dogs free of charge and has expanded to look for trainers, which is where Carbone ties into the program. As time went on, she asked WDFV if she should start a WDFV program at Northpoint, and it happened. With Mutts with Manners, all the dogs come from the Danville-Boyle County Humane Society, but with WDFV, she can take in dogs donated from anywhere and train them at the prison.

In addition to how to train the dogs Carbone also teaches inmates how to “read” the dogs and the “signals” they give that can be indicative of their comfort level and health.

The hope with the inmates with both WDFV and Mutts with Manners is to educate the inmates about training so when they have their parole, they can go to, for example, a shelter or rescue center and help train dogs, which could eventually lead to a job. There’s a “lot of room” for more educated assistants in dog training, and there’s also a shortage of people training who don’t charge large sums of money, Carbone said.

Through WDFV, once veterans are paired up with dogs, they bond, and the dogs learn how to accommodate the individual needs of a veteran. The veterans are taught it’s their responsibility to make sure the dogs get the exercise they need and that their other needs are met. WDFV screens families to make sure they are a good fit for the dogs, and they can supply families with fencing, leashes and security dog vests.

The veterans can train with their dogs in Lawrenceburg, where WDFV can provide them with housing accommodation, especially if the veteran can’t afford a hotel room, or veterans can train with their dogs with people like Carbone on a volunteer basis. It’s usually very expensive for service dog training, Carbone said. WDFV is trying to find more trainers “all over” so veterans don’t have to travel to Lawrenceburg for training especially if they struggle with expenses, she said.

There’s also a network within the program, Carbone said. Trainers can call Carbone if they’re looking for a dog with particular abilities, and she can do the same with them, so they can help veterans with specific needs.

“It’s just a good network of people working together trying to make sure that we’re getting the right dogs in the right place,” Carbone said.

Carbone shared a personal anecdote from a veteran named Mary Welsh about staying in Lawrenceburg for training. Welsh stayed there in May 2018 for four days and “wasn’t charged for anything,” she wrote in the statement Carbone shared. She met several dogs, and one named Fenway, a dog trained at Northpoint, “chose” her. Later, she returned to her brother’s house with Fenway, and they continued training together. Eventually, she and Fenway moved to Knoxville, Tennessee, and away from her brother’s house.

“I thought I would be living with my brother the rest of my life,” Welsh wrote in the statement Carbone shared. “Fenway gave me my life back in so many ways. She alerts me to take my meds. She pulls me out of flash backs. Calms me during panic attacks. Wakes me from nightmares. The most important thing is she makes it possible for me to not only live on my own but allows me to live a full life.”

The fair will go on!