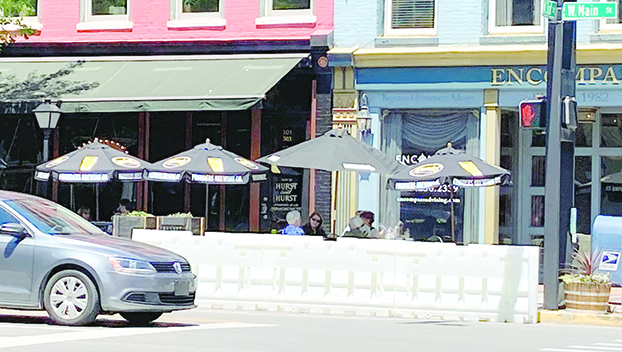 A large, plastic barrier, filled with water, has been placed at the Main Street parklett in front of Copper and Oak restaurant. The Kentucky Department of Highways insisted that the city place the barriers at each parklett. -Photo by Robin Hart

The large, white, plastic barricades that are now placed at each parklet on Main Street are mandated by the Kentucky Transportation Cabinet. But they are temporary, just as the parklets themselves are deemed temporary.

According to City Engineer Josh Morgan, “City staff with assistance from the Downtown Master Plan Consultant team began discussions with KYTC in the spring of 2020 regarding the potential installation of parklets. Not only as a response to the restrictions created by COVID-19 but also to test the potential need for more pedestrian space on Main Street.”

Morgan added, “At the time, the city was under the impression that due to the COVID-19 restrictions parklets were permitted within state right-of-way. Therefore, the city proceeded to construct and install the first parklet in November of 2020 on the south side of Main Street (in front of Bluegrass Pizza and Pub). This parklet remained in place over the winter and all indications were that it was a welcomed addition to downtown.” 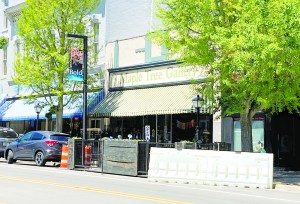 A parklet right outside of the Maple Tree Gallery front door is now protected by a barricade, that was mandated by the Kentucky Transportation Cabinet. -Photo by Robin Hart

Morgan began working for Danville in January of this year, and was told by City Engineer Earl Coffey (who was also the former city engineer) that two more parklets on the north side of Main Street were going to be installed this spring — in front of Copper & Oak and Maple Tree Gallery.

Morgan said, “Shortly after completion, the city was notified by KYTC that there were now guidelines concerning parklets and the city is required to meet those guidelines and submit an encroachment permit application.

“The city’s parklets already met many of the requirements, but the one item lacking was the parklets were to be protected by crash-tested, water-filled, longitudinal barricades. After extensive research and discussions with KYTC, the city has submitted an encroachment permit and installed the barricades. These barricades were not initially part of the plan for the parklets, but they are necessary to allow them to stay and they ensure that all entities are comfortable with the level of safety provided.”

Natasha Lacy, spokesperson for the KYTC District 7 wrote in an email that representatives of the department met with city officials about two weeks ago and are “working with the city toward an acceptable plan,” to keep the parklets in place for a few more months.

Lacy said, “The city is not allowed to use state right-of-way without permission. Last year the city floated the idea about it, but did not apply for a permit. They (the parklets) were constructed without permission, and was asked to remove them due to them not being properly protected. We worked with the city engineer to develop an acceptable design … and are reviewing their permit submittal.”

Lacy said temporary on-street seating areas were originally permitted during the pandemic when restaurants were closed to or severely limited to the number of indoor-seating available. Having outdoor seating helped some struggling restaurants be able to stay in business.

Lacy said, “If following the appropriate guidelines, we can permit the use of parking areas only during the pandemic.”

Some of the state guidelines for on-street outdoor seating areas include:

• Be located immediately adjacent to a sidewalk;

• Be on street, in public parking spaces that do not have peak hour restrictions;

• Be at least 1.5 feet from adjacent parking spaces;

• Be at least 20 feet from intersections

• Be at least 10 feet from fire hydrants.

Morgan explained, “The timeline for the removal of the parklets depends upon further guidance from KYTC.  KYTC has indicated to the city that they will need to be removed once the COVID restrictions are lifted, but that has not been clearly defined.” However, he  added, “Included in the new guidelines is a provision that indicates that the parklets cannot stay in place over the winter, so the latest they will be allowed to remain appears to be October 31st.”

Morgan said, “When the time comes for the parklets to be removed, city staff is already exploring options for relocating them to city streets which would allow more flexibility and community input. The newly purchased barricades will be utilized for years to come by the city for a multitude of uses including; road closures, festivals, work zones, etc.”

He added, “When the city identifies a struggle within the community, it should identify an adaptable, resilient, and low-cost solution to that struggle, and then implement that solution. The parklets were brought about by that mentality and we hope we can continue to be helpful to our community.”

Danville Mayor Mike Perros the large white barricades were required by the KYTC and are located “in every community where there is a parklet. Unless the DOT changes its policy, they’re going to be here, and/or, until the city removes the parklets.”

Perros said he thinks each parklet cost the city about $11,000 in installation and materials. He said the city manager made the decision to install the parklets, not the city commission, who only creates the city’s budget. And as long as the city manager “stays within the line items in the budget,” Perros said, “it’s his role and his freedom to do so.”

When asked if he liked the parklets, Perros replied, “I like anything that creates business for our local economy, whether it’s downtown, southtown, or northtown, and it’s a healthy source of revenue. I’m all for that.”

This document serves as quick overview of calls the Danville Police Department responded to May 14 – 16. It does... read more