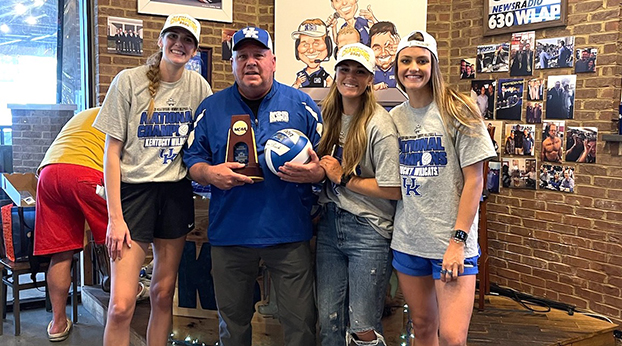 Summer camps will be coming up and if you ever wondered why those camps can be so important, just consider All-American Madison Lilley of national champion Kentucky.

Lilley came from Kansas City to attend UK coach Crag Skinner’s summer camp when she was in the seventh grade.

“A few different Kansas City girls were going so it just liked something that would be fun to do. Carpool to camp and just have a good time,” Lilley said.

She kept coming back to camp — something Skinner called a “Godsend” for UK — and one of her camp roommates one year was Gabby Curry.

Turns out Curry also signed with Kentucky and became an All-American libero while Lilley became the nation’s dominant setter.

“She is one of the most fierce competitors I have ever been around,” Lilley said about her senior teammate. “At the national championship, you could just see that fight and drive in her eyes and that was so cool.

“Just the relationship we developed on and off the court was so awesome for us. It allowed us both to elevate our game and that was huge for our team.

“We are both so competitive that we embraced the grind (of last season). We went through the wringer together, especially in the summers. But we both were always more than willing to do that because we believed it would get us to where it did this year.”

Calipari and Coleman were not strangers