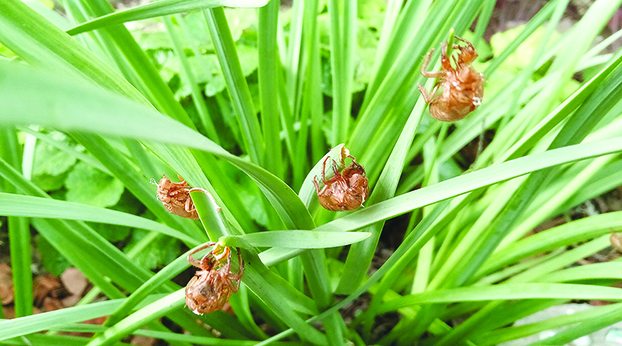 The shells of cicadas are left behind on daffodil leaves in Susan Jonas’s yard this week. -Photo by Susan Jonas 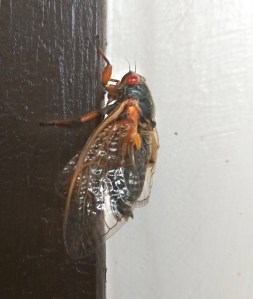 A cicada has emerged after spending 17 years underground at Susan Jonas’s home this week. -Photo by Susan Jonas

The 17-year periodical brood of cicadas are beginning to emerge from underground in this area, but “nobody panic,” said University of Kentucky Boyle County Horticulture Extension Agent Alexis Amorese Sheffield. “They’re not a danger to your trees and shrubs.”

Sheffield explained that the cicadas aren’t like an infestation of Japanese beetles because they don’t eat the plants.

But the females do lay their eggs in the twigs of trees and shrubs. “They make a slit in the tip of a branch and deposit their eggs.” Once the eggs hatch in six to eight weeks, the nymphs fall to the ground and burrow under the soil where they will remain for about another 17 years.

The worst that will probably happen is that the twig or branch where the eggs were laid will turn brown, Sheffield said.

“It doesn’t look great, but it’s not usually going to kill a plant.”

She also said, “We’re not expected to see high numbers in Boyle County.” The cicadas will mostly be in Tennessee and Ohio River area.

Sheffield said that homeowners don’t need to treat their trees with insecticides. “It’s not as effective for homeowners.”
But if someone wants to help protect their trees and shrubs from being a nesting place for cicada eggs, they can cover them with a garden fabric called Reemay, she said. It’s kind of like cheesecloth, Sheffield explained, and lets sunshine air, and rain penetrate but not insects.

The cloth should be secured around the trunk to prevent the cicadas from climbing up and laying their eggs. The cloth or netting should be removed at the end of June or when cicada activity stops.

People with orchards or garden nurseries may want to use more “care tactics,” to help their plants thrive.

She said cicadas don’t go looking for any particular type of tree. When they emerge from the ground, they’ll usually just crawl up the closest tree to mate and lay their eggs before their life cycle is over.

As for the deafening sound that millions of males in one area can produce while trying to attract mates, Sheffield said there’s really nothing that can be done to quiet them. Even if you could shew them away to a neighbor’s yard, the cicadas’ songs are so loud that you’d still hear them.

The periodical cicadas that are emerging now have black bodies, red eyes, and red-orange wing veins in two pairs of clear wings, according to UK’s College of Agriculture, Food and Environment Entomology web page. “These clumsy fliers often stay in the upper canopy of trees while they are active from late April through June. Encounters with periodical cicadas can be unnerving to some but these insects cannot sting and do not harm humans, livestock, and pets.”

Danville resident and gardener Susan Jonas said the “big brood of 17-year” cicadas are emerging in her yard already although she hasn’t heard of anyone else experiencing the emergency yet.

“The shells (from molting) are everywhere in my garden, even in the screened porch and under the outdoor furniture. … Birds are snapping them up. They aren’t ‘singing’ yet, but they will soon fill the summer air and drive us nuts.”

Jonas added, “If this hatch is like the last one 17 years ago, the insects will be swarming by the billions.”

Boyle County FFA students planted hundreds of flowers in the government circle at Constitution Square Thursday with help from the... read more