Lumber prices cause challenges to Habitat for Humanity 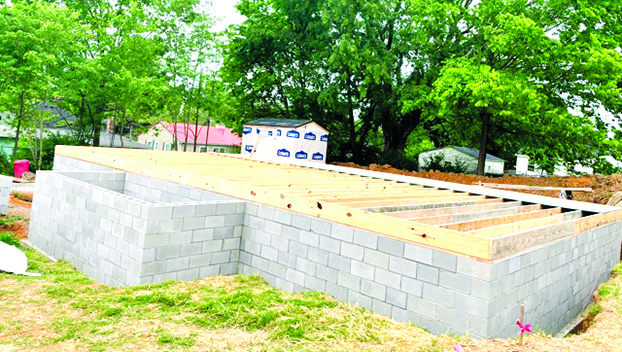 This is the status of construction on the 2021 Boyle County Habitat for Humanity house so far, located on Palmer Court, as of Wednesday. President Larry Fitch said construction is continuing, and the sub-floor is being installed. - Photo submitted

Compared to last year’s prices, the cost of lumber has approximately quadrupled since around this time last year, said Terry Manon, a Boyle County Habitat for Humanity board member who sits on the Habitat’s finance committee. This has had an impact on Habitat’s construction of its 2021 home building project.

Manon has been tracking the increased cost of lumber since fall 2021 and the impact it’s having on the project. He said around April or May of 2020, the price of lumber was about $340-$400 per 1,000 board feet, a fairly low price. On Tuesday the current price was $1,400 per 1,000 board feet, which he said is down a couple of hundred dollars from what it was a week or two ago. Prices have been at record highs, and this is a national issue.

And it’s not just lumber — construction-related prices for materials like drywall and fiberglass have gone up too.

One of the factors contributing to the spike in construction prices is that when the COVID-19 pandemic began, lumber mills were shutting down, reducing capacity or beginning their annual equipment maintenance they typically would wait till winter for, since they anticipated the pandemic would cause construction demand to drop. It didn’t.

People were at home more and spending stimulus checks on remodeling projects, for example. The issue hasn’t been a shortage of trees to make lumber — Manon said there’s actually an excess of those. It’s been the anticipation that demand would be down when it has heightened instead.

“People continued building, and all of a sudden homeowners started remodeling like they’d never remodeled before — just caused a dramatic shortage in lumber,” Manon said.

For Habitat for Humanity, this could cause an increase in the cost of 2021’s Habitat house compared to normal.

“And it actually affects Habitat more than the average builder because our lumber is a much higher percentage cost of our home because our labor is free,” Manon said. “We have all volunteers that are building the house, and so labor is basically free, whereas on an average home, it’s a big chunk of the home construction price.”

Manon said Habitat has been communicating with the home buyer about potential increases in cost, and each time she has said she wants construction to continue.

President of Boyle County Habitat for Humanity Larry Fitch said despite challenges with construction, Habitat is looking forward to constructing a new, affordable home for a family, like it has for more than 30 years. Last year despite the pandemic, Habitat volunteers completed a three-bedroom, two-bathroom home in Perryville in October 2020, and a family moved in. There was a smaller, masked, socially-distanced volunteer crew, but they got the job done.

On the 2021 house, which is located on Palmer Court, Fitch said Habitat has been working for a few months now, and at this point even with increased construction prices, they’re at the point where construction must continue, otherwise weather and other factors could damage what they’ve done so far. When they first started, since there was the shortage of lumber they temporarily couldn’t get all they needed, but otherwise construction has been on track.

“Now, we’re just torn about spending the money for the cost of the lumber because it’s just inordinately high,” Fitch said.

According to a press release, “This year, more than ever, Habitat for Humanity welcomes financial and construction supply donations from individuals, religious organizations, and businesses. They are grateful for the volunteers, local construction trades, and organizations who currently donate their time and material to help build Habitat homes.”

“Volunteers, with or without prior construction experience, are always welcome,” Fitch said in a press release. “We’re also looking for inexpensive residential lots in Boyle County to build future homes on. If you know of a low cost lot or are interested in volunteering, you can call our office at 859-236-9153; and messages should be returned within 48 hours.”

Habitat is currently having difficulty finding affordable lots for future homes. He said in previous years, Habitat has been able to purchase lots for less than $10,000, and he asks that if anyone knows of affordable lots, to let Habitat know.

“The commitment for a qualified loan officer is minimal because our mortgages are very simple and we only build one house per year,” Fitch said in the release.

Community partners or individuals interested in learning how to help Habitat with lending oversight should email bchfh4@bellsouth.net, according to the release.

How to apply as a candidate for a Habitat home

According to the press release, “Boyle County Habitat for Humanity accepts candidates for a new home, typically a married couple with children or a single parent with children, who meet three criteria,” which are:

• The family must demonstrate need for adequate housing because their current situation is “dangerous or otherwise unacceptable.”

• They can demonstrate the ability to pay for a Habitat home with annual family earnings of about $25,000-$50,000, depending on the household’s number of people.

• The family is willing to help with construction.

The process to apply includes: “a formal application, proof of income, a national credit check, home visits, and personal interviews,” according to the release, and “Financing over 20 years typically yields monthly mortgage payments, including taxes and insurance, that are less than the cost to rent.”

Boyle County residents who are interested can pick up an application Tuesdays between 10 a.m. and noon at the Habitat for Humanity office located at 447 South Third Street in Danville. They can also call the office at 859-236-9153.