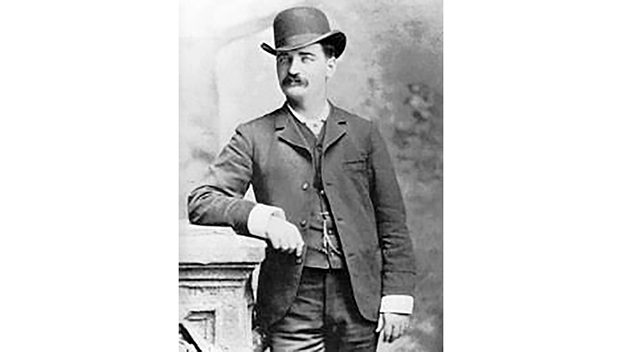 William Barclay “Bat” Masterson was a bodyguard for George Sanders, a Danville native, during his vacation in April 1900 in Hot Springs, Arkansas. Masterson was an Army Scout, lawman, professional gambler and journalist during the 19th and early 20th century American Old West.

(Editor’s note: Research for this article was from The Kentucky Advocate.)

He was the grandson of Elijah Morton Crow, a Danville pioneer, and Nancy England Crow of Garrard County.

Sanders was a detective with the Denver police department for many years, and was involved in many hair-raising escapes from outlaws and thieves whom he and his working companion, Edward CanBerry, tracked and confronted their fastness and hiding places in the Rockies.

Sanders apparently was so good at this job as a detective, he had a famous bodyguard.

William Barkley “ Bat” Masterson, a friend of Sanders, was Sanders’ bodyguard during his stay during his vacation April 1900 in Hot Springs, Arkansas.

Sanders’ friend told a story about him when he found a suspicious looking stranger strolling about the city and hauled him up to give account of himself.

The stranger was well dressed but had no visible means of support and failed to tell a satisfactory tale to the officer. After a search, the only thing found was a copy of The Kentucky Advocate.

“Where did you get this?” asked Sanders as he began to read the newspaper about his old hometown.

“My sister sends it to me regularly,” replied the prisoner.

“Well, you can go,” said Sanders. “Any man who carries as good a thing as the Danville Advocate around with him is all right.”

Sanders caused much anxiety at the Denver police headquarters in October of 1898 when he started north to arrest a man accused of murder and robbery of Otto Goette, a sheep herder.

Sanders began his search with instructions to follow the suspect anywhere, “just so he caught him.” He knew where he would he would get a track of the much wanted individual and spared no expense or trouble in following the trail.

The next day, Sanders telegraphed the local police that he would go into the western part of Nebraska that day. He was told to notify the home office twice a day of his whereabouts and the progress he was making, but a week later, he had not reported in to the Denver police department.

“I am fearful that everything is not all right with Sanders, and I am speaking seriously, too,” said Chief Farley. “My apprehension is based upon his long silence.”

“He is an obedient man and I believe there is something wrong. I can see how he could be detained for one day and possibly two far away from a telegraph office on his official duty, but I cannot for the life of me conceive how he could be kept away for four days and be all right.”

However, all went well for Sanders. He reported back a few days later that his travels took him into Wyoming, where he encountered four feet of snow 200 miles from the nearest telegraph station. This caused him to delay his reports to his chief.

Sanders reported he was on the track of the man and intended to land him if he had to follow him to Alaska.

Sanders was a young man when he left his family in Kentucky for his western adventures. He settled in Denver where he married and had a son.

He apparently returned to Danville often to visit his aunt Mattie Stanwood and other relatives.

Sanders died in November 1933 and is buried in Colorado.

Sanders was a grandson of Morton Crow who moved from Jessamine County to Boyle County in 1857. He was originally from Estill County. He was a prominent business man for many years and a devoted member of the Methodist Church.

He served as a member of the first Board of Trustees of Danville which voted to abolish saloons from the town and was a freight hauler from Harrodsburg to Nicholasville.

When he died in 1901, he was survived by a daughter, Mattie Stanwood, of Danville, and three grandchildren, Mrs. F.C. Smith and Charlie Stanwood of San Antonio, Texas, and C.M. Stanwood of Memphis, and a grandson George Sanders of Denver,Colorado.

Morton and Nancy are buried in Bellevue Cemetery.