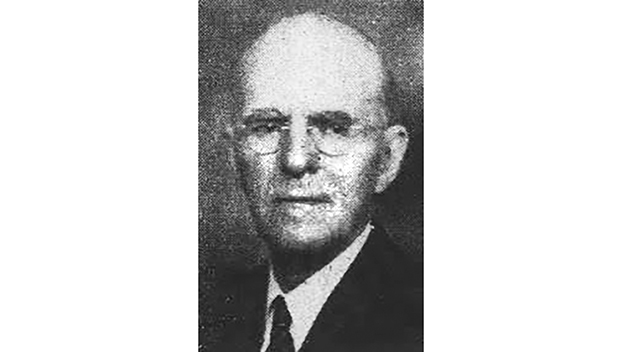 Harry Giovannoli spent more than 60 years working in the newspaper industry. He became associated with the Advocate shortly after it was founded.

Giovannoli began his career in 1866 at the age of 11 in Lexington as a newsboy and later became a cub reporter for The Kentucky Advocate which was still using a hand-press. Ten years later, he was general manager of the Danville newspaper.

Giovannoli was the eighth editor of the Kentucky Advocate. In 1940, he wrote an article on “Life in Danville Sixty years ago” for the Advocate Messenger.

During his time in Lexington and Washington, he returned to Danville many times and was well-known by the older and younger citizens in the city.

A tribute to Giovannoli appeared in the 75th anniversary edition of The Advocate.

“Giovannoli shortly became a master printer and later a brilliant editor. He has a record in the printing and publishing business that stands out as a challenge.

“He started with the broom and ended with a pen brilliant one. Today he sits at the directing helm of two big daily newspapers. He spent some 14 years in Washington which gave him big ideas. Yet, we feel that he still belongs to the Advocate.

“He was a gifted writer and also contributed to magazines. He liked to fish and be outdoors.”

Dr. Harry Best , professor of sociology, a 1901 Centre College graduate and researcher in sociology and economics also gave a tribute to Giovannoli.

“He was a life of noble conceptions and actions that should not fail of recognition in a country like America.

“Giovannoli wrote a special column in the Danville Advocate in which were shown what were to be his guiding principles through life.

“To be found there were alike a flaming zeal for the cause of righteousness and justice and an arm stretched out for those on life’s highway whose burden was too great for their strength.

“All his life was given to good deeds and to bringing of God on earth. His sword was unsheathed in his fiery and unremitting attacks upon the evil and shame that race track gambling brought to Kentucky.

“Whole just and fearless always, was of the gentle kind — he was one whom it could be said that ‘his gentleness had made him great.’”

Giovannoli took a break from the newspaper business in 1900 to become a private secretary to J.W. Yerkers, Commission of Internal Revenue in Washington, D.C., when William McKinley was president.

Giovannoli was transferred from Chief Clerk of the Internal Revenue Bureau in Washington,D.C., to the Chief of the Stamp Division, which he left a year later to become chief clerk.

The salary of the chief of the Stamp Division, had been increased to $25,000, the same as the chief’s position. He retired from federal work in 1913.

Giovannoli’s first love, the newspaper business, won him away from Washington and he returned in 1913 to Lexington, to become editor and manager of the Lexington Herald. He held the post until August 1927, when he retired.

The newspaper called him a “No. 1 newspaper man, and editor of genuine ability, well informed, responsible fair-minded, honest and brave. He also is an royal good fellow.”

After consolidation, he was elected secretary of the publishing corporation and general manager of the Florida newspapers until 1940.

Giovannoli died April 9, 1943, in Lexington, a day before his 77th birthday. He also had two sisters Louise and Olive.

All are buried in Bellevue Cemetery.

Looking Back At KSD: Bicycling in the last decade of the Nineteenth Century