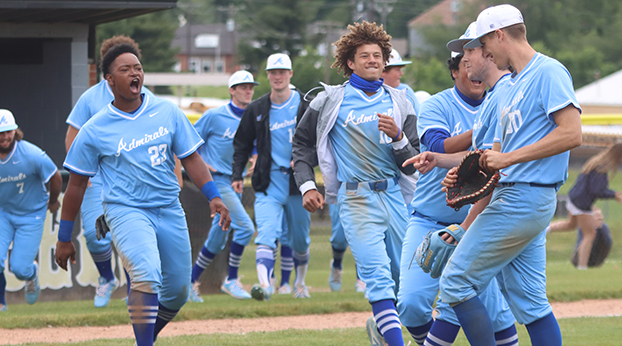 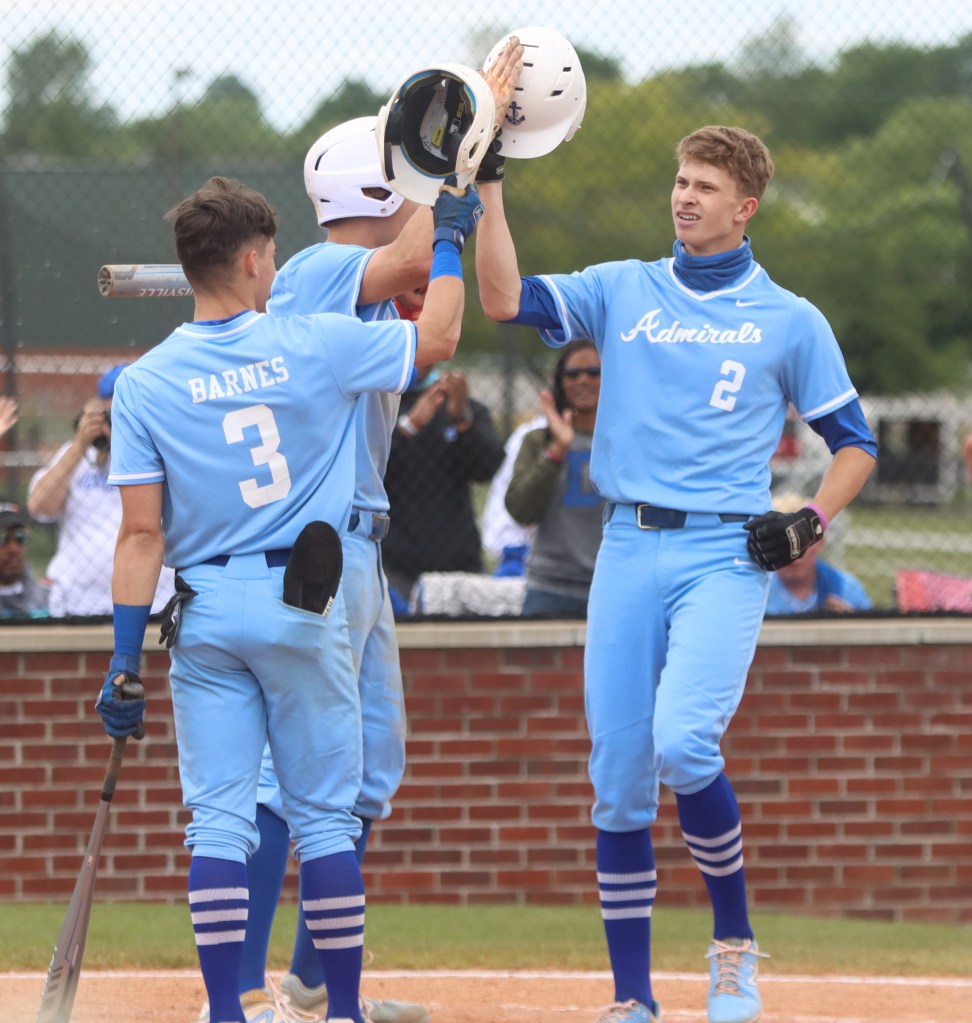 It was not a typical Danville win, but it might have been the win it needed.

Playing at a level that their coach said was well below their best, the Admirals eked out a 6-5 victory over Boyle County on Sunday to capture their third consecutive 45th District championship.

The Admirals have their sights set on playing deep into the postseason, and they figure this won’t be their last difficult game, so they think a game like this could be more beneficial than the blowouts to which they have become accustomed.

“When we get to state, we know we’re not going to blow everyone out,” Danville’s Brady Baxter said. “There’s good teams out there, so these close games get us ready for state. We didn’t play well today, but we still came out with the win.”

Baxter belted a three-run home run in the fifth inning and earned the win on the mound as No. 2 Danville (35-3) rallied for the second time in the game to defeat its crosstown rival for the third time this season.

Prior to Sunday’s game at Boyle, the Admirals were outsourcing their opponents by better than nine runs per game. They had played only four one-run games and lost three of them.

But they found themselves in a dogfight Sunday, and coach Paul Morse said it was largely a mess of their own making.

“At some point, you’re going to have that over these next however many games we’ve got left,” Morse said. “I said (after the game), ‘Think about it, guys. Is there a game that we’ve played worse than this all year?’”

Morse said he didn’t think so, citing pitching that wasn’t as sharp as usual, plays that weren’t made in the field, baserunning errors, other mental mistakes, and being a little too aggressive at the plate early in the game.

Even so, the Admirals prevailed. They answered Boyle’s three-run fifth inning with three of their own in the bottom of the fifth — Danville batted last as the higher-seeded team — taking a 5-3 lead on Baxter’s 11th home run of the season.

Christian Howe, whose two-run homer in the first inning erased a 1-0 deficit, was hit by a pitch and Preston Barnes walked to set the stage for Baxter, who was looking for a chance to redeem himself.

Baxter was brought in as a relief pitcher in the top of the fifth, and he hit a batter and committed a throwing error that allowed two Boyle runs to score. Now he was waiting at the plate while Boyle coach Adam Blair visited the mound to talk to his pitcher, Eli Glasscock, and he was ready and waiting once that visit was over.

“I knew I messed it up on the mound (in the top of the inning), and they just went out to talk to the pitcher, so I knew there was going to be a fastball coming. So I was ready for it and I got every bit of it, and it hyped up my team,” Baxter said. “I knew a fastball was coming because he had been a little wild. I was ready for it, and I just hit it as hard as I could.”

Baxter returned to the mound for the sixth inning, striking out the first two batters he faced before an error and two walks loaded the bases.

Logan Smothers came on to get an inning-ending groundout, then retired three of four batters in the seventh for the save.

It was easily the closest of the three meetings this season between Boyle and Danville — the Admirals won 9-4 and 5-1 during the regular season — and Blair said it was both a disappointing and encouraging loss for the Rebels.

Boyle (22-14) left nine runners on base, eight of them in the last four innings. Even so, the Rebels were in the game to the end, and Blair said he thinks that left his players hungry for more.

“It was kind of a testament to say, ‘Hey, we belong here,’” he said. “We played the No. 2 team in the state, we saw three Division I pitchers and we went head to head with that.”

Boyle scored first when Glasscock and Kason Myers opened the game with singles and Glasscock scored on a delayed double steal.

Danville answered in the bottom of the first with a single by Wood and a two-out bomb by Howe, whose 18 homers put him one up on Wood for the team lead. Both Wood and Howe had two hits and reached base four times.

Wood drove in a run with a double in the second, but Boyle’s Luke Gaffney scored a two-out run in the fourth on a wild pitch, and the Rebels scored three times in the fifth with two outs on Cole Sims’ RBI single and an error.

“I guess what I was disappointed in was a little bit of lost focus with two outs,” Morse said. “The inning’s not over with two outs. There’s lots of times we’ve scored lots of runs with two outs ourselves, so you’ve got to be a little more focused.”

Both teams will have a five-day layoff before the 12th Region Tournament, which is expected to begin Saturday.

Morse said he’s happy to have some time to teach in the wake of this game.

Blair said Boyle’s players will look forward to getting back to work as well.

“They enjoy being here,” he said. “They’d practice right now, probably, if they could. I do love this group, and I can’t wait for next week.”

He said he hopes his players, particularly the seniors, will stay in “baseball mode” even though they’re no longer in the regular routine of school.

“I told them, ‘You can work the rest of your life … but be a kid for a couple more weeks and have fun and maybe go on a special run,’” Blair said.

It is the 45th District champion’s turn in rotation to host the regional, and Danville will host the event for only the second time in modern history and the first time since 2012.

“We’ll have home-field advantage, and it hypes us up,” Baxter said.

Morse said that advantage is important to a team that has gone 29-1 on its own field since the start of the 2019 season.

“(There’s) a comfort standpoint,” he said. “That’s your home field, and we want to defend it.”

The draw will be Wednesday, and Morse said first-round games would likely be played Saturday, followed by the semifinals on Sunday and the championship on Monday.

Paul Morse doesn’t recall his first victory, but he’ll remember this one. Twenty years after Morse got his first win... read more