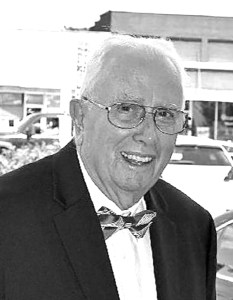 Harvey Laurel Ayres, 91, of Lancaster, passed away May 30, 2021 at Baptist Health in Lexington, Kentucky. He was born on June 27, 1929 to the late Harvey Lewis and Mable Lusby Ayres. Harvey is survived by his loving wife of 72 years, Doris Brogle Ayres.Harvey was born in Owenton, Kentucky and moved to Lancaster when he was 17, where his father became pastor of Mt. Hebron Baptist Church. It was there he met his wife, Doris and where they have been faithful members for 74 years.

Harvey was a MoorMans Feed Co. Salesman and District Sales Manager for 34 years. He was owner of Dixie Stock Farms, where he had one of the largest Angus farms in the United States. He was on the Board of Directors of First Southern National Bank since 1979 and the Ky Angus Association.

After retirement, he was a familiar sight at Danny Ayres Realty. Harvey had many accomplishments and accolades, but his legacy is truly his family, whom he was so proud of.

The family would like to thank Tanbark Rehab and Personal Care Facility, nurses and staff of Baptist Health Lexington, Hospice Care, for caring for our father the last four of months of his life.Condolences are preferred to Mt. Hebron Baptist Church and Hospice at Baptist Health Lexington. Spurlin Funeral Home of Lancaster in charge of arrangements. www.spurlinfuneralhomelancaster.com