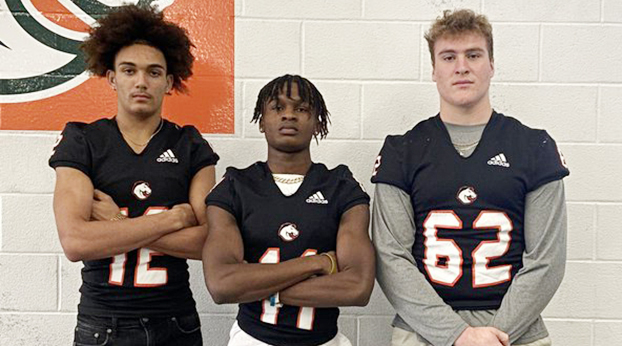 About two months ago Frederick Douglass receiver Dane Key — a four-star prospect and top 300 player nationally in the 247Sports rankings — narrowed his potential college choices to 10.

He had Kentucky (where his father, Donte, played linebacker) on the list along with Arkansas, Virginia Tech, Purdue, Wisconsin, Oregon, South Carolina, Mississippi State, Virginia, and Michigan State.

“He has had a couple of other schools reach out to him since he narrowed his list down,” Donte Key said. “But he has got really good ones on that list. They are really good schools and coaching staffs.”

Donte Key said his son is planning to start taking college visits soon and has not encouraged other schools to keep recruiting him. Yet it was no surprise when Michigan made an offer. Former UK secondary coach Steve Clinkscale recently made the move to Michigan and his sons played with Dane Key at Frederick Douglass.

“He is close to some other people, too, but that will not impact his decision,” Donte Key said. “I told both our boys they had to go somewhere that fits you and your skillset.”

At Kentucky, it remains to be seen how Coen’s offense will fit Key’s skills even though the transfer of receiver Wan’Dale Robinson from Nebraska to Kentucky certainly indicates he expects UK to have a pro-style offense this year under Coen, a former Los Angeles Rams assistant coach.

“Vince communicated that the offense did some really good things this spring. Obviously, we were not able to go over and see, so we are excited to see what the offense looks like when we get that chance,” Donte Key said. “But he does have to wait and see how he fits into that offense because we don’t know what it is yet.”

Dane Key caught 33 passes for 545 yards and eight touchdowns as a sophomore and had 37 catches for 625 yards and 11 scores in 2020. That means for every seven passes he’s caught, two have gone for touchdowns. That’s why he is a member of the ESPN300.

His athleticism also shows on the baseball field where he’s hitting a team-high .413 this season with 10 doubles, four triples, 33 stolen bases, and 16 RBIs in 30 games.

“Growing up we thought baseball would be the sport he excelled in. He bats left, throws right. He gets down the line really good and he covers a lot of ground on defense,” Donte Key said.

“We were fortunate to have Eddie Brooks coach both of our boys. He knows baseball. But Dane always loved baseball. He would always carry a bat with him. He would go out in the snow and hit a baseball off a tee. That’s how much he loved it.”

Dane Key won’t be attending summer camps. He prefers to visit schools to see the facilities and hopes to set up his five official visits in the next month. He likely will not commit until at least the start of Frederick Douglass’ season and it could be midseason before he makes a college choice.

“Kids in the 2021 class had to commit without knowing what was going on because they could not experience being on campus and around students (because of COVID),” Donte Key said. “He wants to see the campuses and see what they are like.”

Calipari not planning to rely on popular transfer portal in future

Most of Kentucky’s roster will be stocked with transfers next season but coach John Calipari doesn’t think that will become... read more