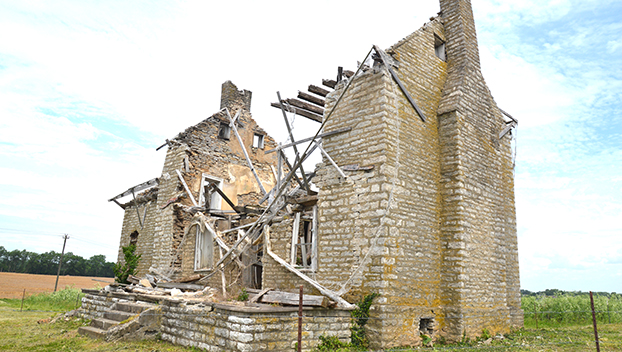 The historic William Crow House sits on the farmland now owned by LMD Holdings, LLC with the client Luca Mariano Distillery. Francesco Viola, Luca Mariano owner, wants to both preserve the historical integrity of the house and give it a new use to incorporate it into his larger distillery plan. The house was the first stone house built in Kentucky around 1783. - Photo by Olivia

Francesco Viola, owner of the Luca Mariano Distillery brand, which has acquired a large acreage of land off Lancaster Road including the historic William Crow house built around 1783, is considering options for what to do with the house. He wants to keep the house’s historical integrity intact but also make it suitable and safe for new use as part of the planned distillery operation on the property.

Viola said he wants to have a full services bar in the house, an outdoor patio in the back of the house overlooking a nearby pond that’s planned to be cleaned up, and also eventually an amphitheater where the patio will overlook.

Right now, the house is quite a fixer-upper. A large part of the middle third of the house is caved in, many stones are gone from it, the first stone house built in Kentucky, and even on the two side walls that are still standing, one chimney leans to the left.

On May 26, Joni House, preservation coordinator of the Danville Architectural Heritage Board, visited the property along with Viola and several others involved with the project. She shared the difference between a reconstruction and a replica, and options Viola and those involved in the project have for rehabilitating the house. 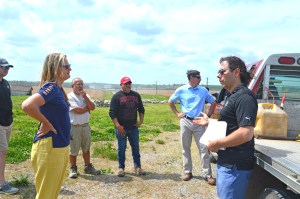 From left, Joni House, preservation coordinator for the Danville Archietectural Heritage Board, talks with Francesco Viola about his options with the historical house. – Photo by Olivia Mohr

Also, she said according to the standards, the project can still be considered a reconstruction if the interior of the structure changes or the exterior of the house is built onto. Where there may be a problem with adhering to preservation standards is if the structure is taken down to be reconstructed without marking every stone. Even the truest replication is still replication, she said.

“When you take the whole thing down, take all the stones away from it and completely rebuild it, then it’s a replication, and what happens at that point is the site would be de-listed from the National Parks Service national historic registry,” she said.

However, she said, if they were to stabilize the two main walls on either side of the structure, it could be considered a reconstruction. There are ways to do this, though they are expensive.

Viola said the knowledge that the stones on the inside of the structure won’t matter in terms of historic preservation standards made the meeting with House well worth it because now the project could develop a strategy. In terms of how to pay for the expenses of rehabilitating the house, he discussed the possibility of community donations, since he said rehabilitating the house can’t take up the whole project’s budget.

“I want to do everything we can to save The William Crow Stone House,” Viola said in a text message. “When selecting the plan on how to fix the home, we have to take the safety of our future guests and the construction crew into account first. The foundation and home is in really bad shape. We purchased the home in bad shape. Now we are doing our best to honor and to fix our historic home.”

When asked about updates on plans for the structure since the May 26 meeting with House, Viola also shared quotes from the architect involved with the project, Nick Liebler.

Liebler wrote that the architectural and engineering experts are examining the walls and structure to see if they can be salvaged, and “If not, the building will be a faithful recreation of the original.”

“The original stone will be used on the exterior,” Liebler continued. “Historical photographs and extensive measurements completed two years ago will provide the basis for the this restoration/recreation.”

Also on May 26, the Danville-Boyle County Planning and Zoning Commission met in the morning with a public hearing on the agenda regarding Luca Mariano Distillery’s site development plan on a tract of land containing approximately 271 acres at 1695 Lancaster Road. The owner of the property is LMD Holdings, LLC, with the client Luca Mariano Distillery. The commission ultimately approved the site development plan unanimously. A 12,825-square-foot rickhouse is project number one on the distillery’s site.

The site plan as it stands includes the property’s first rickhouse on the northwest part of an approximately 30-acre tract recently zoned as light industrial land, as well as two potential site access construction entrances leading to the rickhouse, one off Letton Drive as the preferred option A, and one off Old Lancaster Road as option B. Planning and Zoning Director Steve Hunter said every additional new building added to the distillery site will need to have additional zone changes filed. This first rickhouse is simply the first step in the larger distillery plan.

In response to questions about stormwater and potential spills during the hearing, Kendal Wise, an engineer with Vantage Engineering PLC who drafted the site plan and is analyzing the property, said stormwater on the property goes into sinkholes, and a spill control basin sized in accordance with the state building code requirements is part of the site plan, slightly south of the planned rickhouse.

During the public hearing, though no one spoke in direct opposition to the site development plan, Danville City Engineer Josh Morgan shared some comments. He asked about the access point off Letton Drive since CHDH Properties, LLC, owns a small section of land through which the entrance would pass, but Wise said the property owners, CHDH and LMD Holdings, are under contract.

Morgan and Hunter discussed the possibility of a shared access agreement added as a note on the plan because the entrance goes through surrounding property held by CHDC, a different property owner. Morgan also said the stormwater plan for the property needs to be submitted to the city before the project can break ground. Hunter said these two city issues were incorporated into the site plan approval.

Hunter said in an email, “After the site plan hearing and P&Z approval, the distillery applied for the required zoning permit, which is the last step in our office prior to construction commencing. The P&Z staff reviewed the application based on the site plan criteria, and we as the staff have all our checklist items in order. We forward the permit to the city to review, and that is where the specific city approval items … will be worked out. Once the city gives us the OK on the zoning permit, we will notify the applicant that the zoning permit application is approved and they are ready to start construction.  At the same time, the distillery will need to obtain a state and a county building permit before moving dirt.”

In a quote Viola shared from Donald Blincoe, Luca Mariano Distillery’s builder from Buzick Construction, Blincoe said going forward, the site work for the rickhouse will begin in June, the first week of July at the latest, and construction will start after site work is completed, in August or early September.