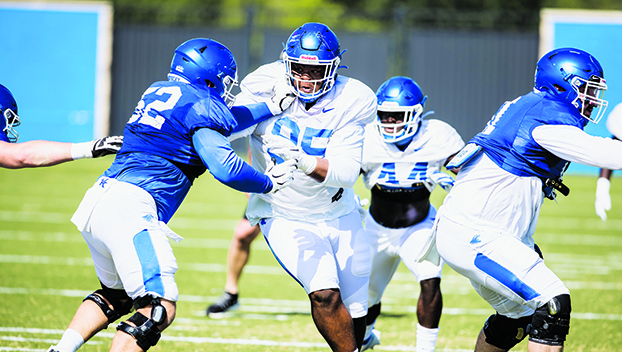 Quinton Bohanna has made a big impression in a short time with the Dallas Cowboys. (UK Athletics Photo)

Quinton Bohanna has made a huge impression on the Dallas Cowboys in a short time after being picked in the sixth round. He’s being looked at as the run-stopper the Cowboys have been lacking in recent years.

Only three defensive linemen on the Cowboys are taller than the 6-4 Bohanna and none can match his weight of 327 pounds — which is still far less than he weighed for most of his UK career when he started 33 of 45 games.

Kentucky recruiting coordinator Vince Marrow believes if Bohanna had dropped weight earlier in his career he would have been a much higher draft pick.

“I was talking to NFL GMs (general managers) and scouts before the draft and a lot were asking me about Quinton,” Marrow said. “I really believe if he had gotten in shape earlier and looked the way he does now, he would have been a third round pick.

“For that size to have that athleticism, that’s rare with how twitchy he is. The Cowboys really loved him. I wasn’t surprised they picked him.”

Bohanna never had more than 18 tackles in any season. He had just nine tackles for loss, three quarterback hurries and two sacks in his 45 games. He did break up four passes.

What Bohanna helped do was clog the middle and enable other players to make tackles and that’s what the Cowboys want him to do.

“I would tell Bully to get your butt in shape,” Marrow said. “Bully is going to be a monster if he gets in shape. He can be just like Quinton.”