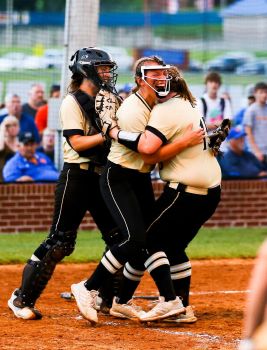 Emily Glasscock, Kayleigh White and Lauren Tipton of Boyle County celebrate following the final out in the Rebels’ win over Southwestern in the 12th Region Tournament final. 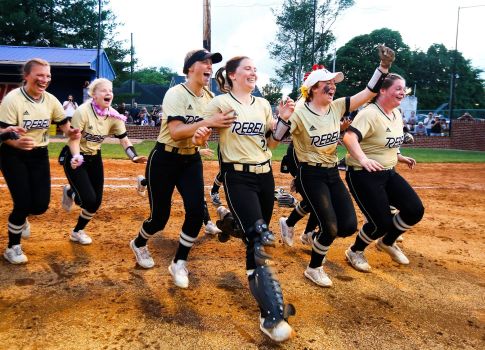 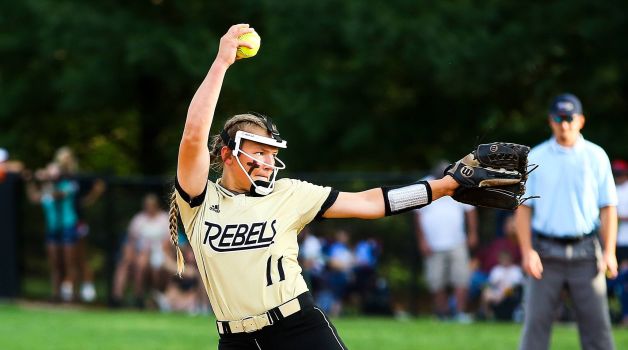 Kayleigh White of Boyle County delivers a pitch during the Rebels’ win over Southwestern in the 12th Region Tournament final. White retired 21 of 22 batters she faced, allowing one hit. 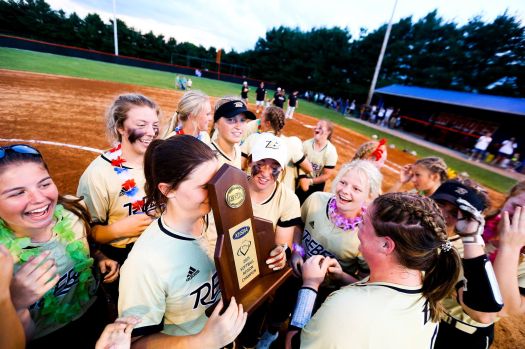 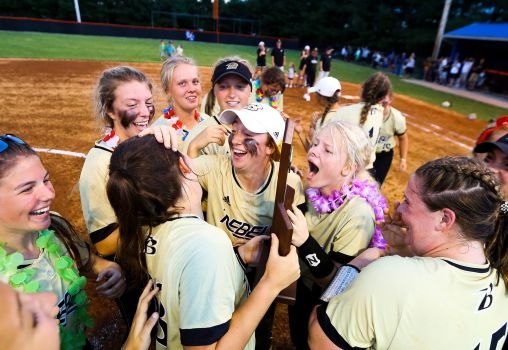 SOMERSET – A one-hit shutout and two home runs were all Boyle County needed to extend its string of regional championships.

Boyle defeated Southwestern 4-0 on Monday night in the championship game of the 12th Region softball tournament at Southwestern’s War Path.

The Lady Rebels’ win gave them their fourth consecutive 12th Region crown and their sixth in nine seasons. But for Boyle County softball coach Brian Deem, winning has never gotten old and each title has been as exciting as the first one.

“Winning never gets old,” Deem laughed and said. “I love it, and when we were up 3-0 late in the game, I love that kind of atmosphere. Credit Southwestern, the field was beautiful, there were people down the line on both sides of the field. Yeah, winning never gets old, and if it does I need to retire.”

Boyle (27-6) returns to the state tournament to play 15th Region champion Johnson Central (33-6) in a semi-state game at 2 p.m. Friday at John Cropp Stadium in Lexington. The two teams were ranked at No. 7 and No. 18, respectively, in the final coaches poll of the season.

The Lady Rebels have played a lot of tough teams throughout the season and have had a lot of close games – including a 2-1 semifinal win over East Jessamine on Sunday and the win over Southwestern in the final.

“Last night’s win (against East Jessamine) was a testament to a lot of the games we dealt with throughout the season – some we won and some we lost,” Deem said. “I felt like we were prepared for close games and if it came down to it with the moment, and being here before, maybe it would give us a little advantage.”

Boyle sophomore pitcher Kayleigh White left nothing to chance by allowing only one hit and retiring the other 21 batters she faced. White pitched a perfect game through five innings until Southwestern’s Aimee Johnson laced a single to right field in the bottom of the sixth. However,
White retired the other three batters to strand the Lady Warriors’ only base runner of the night.

“Coach Deem scheduled us a tough schedule to get us ready for postseason,” White said. “That way when we are in those tough situations, we know how to pull through and we play as a team to get through that.”

White, who was named the tournament’s most valuable player, helped her own cause in the top of the seventh inning when she crushed a towering solo homer run off the left field light pole to put the Lady Rebels up 4-0.

In the top of the second inning, Boyle put up a trio of runs when Lauren Tipton’s three-run blast to deep left field scored Stella Johnson – running for Emily Glasscock – and Ella Coffey. Glasscock got on base with a single and Coffey got on base with a sacrifice bunt error to first base.

Southwestern (25-8) dodged a bullet in the top of the fifth when the Lady Rebels loaded the bases off a White single and walks by Glasscock and Tipton.

Southwestern senior Kaitlyn Gwin pitched an excellent game against one of the best programs in the state. Gwin struck out four batters and allowed eight hits, but it was the two big hits that made the difference in the game.

During the celebration of Monday night’s win, Coach Deem reflected on the 2020 seniors who missed out on possibly winning a fourth straight regional title when the season was canceled due to the COVID-19 pandemic.

“I thought a lot about the four seniors last year that didn’t get to finish out their career with four in a row,” he said. “But I stay in contact with them, and one of the girls was here tonight. We have a hashtag on our field, ‘Lady Rebels Forever,’ and I got all kinds of messages from former players – even back from 2012, when I first started.”

Boyle senior Kyndal Honaker, who was an eighth-grader on the Lady Rebels’ 2017 regional championship team, said this win was for last year’s seniors.

“This regional championship was for last year’s seniors,” Honaker said. “They didn’t get the chance to do it their senior year, and could have went really far last year. So, we are going to do the best we can to go far this year for them.”