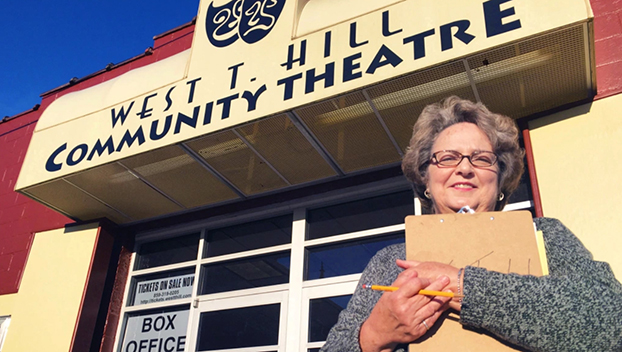 That’s the message theater executive director Karen Logue wants to shout at the top of her lungs from center stage. And to celebrate, WTHCT is announcing its upcoming season of performances — pre-pandemic style — with open auditions, fulls casts and, hopefully, sold out shows at full capacity.

“We stayed alive as best we could,” Logue said. “I’m very excited about the upcoming season. But mostly I’m excited that we made it!”

A handful of performances were pre-cast with just a few veteran actors and were performed during the 2020-2021 season, Logue said. The pandemic also caused the theater to drastically limit capacity in the building to 30 people at one time, which included cast, staff, and audience, Logue said.

But when the new season opens in September, “It’s going to be 100% capacity,” Logue exclaimed — room for 125 audience members and unlimited cast and crew.

During the 2020 shut-down of most businesses in Danville, the theater eventually was only allowed to have about 25 people in the audience. Logue said the WTHCT board of directors was concerned that it wouldn’t be able to pay its rent and utilities.

“We had little income. There were no sponsors,” she said.

However, “It’s been great to watch how the board has been supporting the theater,” Logue said. Plus, “We have lots of wonderful patrons.”

Occasionally some patrons sent the theater money throughout the season just to help out financially. “Every time there was a check in the mail, it was like Christmas,” Logue said.

Now, she and the theater board want the public to know that the shows will go on. “We want people to see we have survived.”

So, by announcing the 2021-2022 season (which runs from September to September) and its 43rd season, Logue said, “We are pretty proud.”

Those who are interested in performing, whether they are experienced or not, are encouraged to audition.

• “It’s a Wonderful Life” The Radio Play by Philip Grecian, based on the file by Frank Capra

• “Crimes of the Heart” by Beth Henley

“Motherhood Out Loud” conceived by Susan Rose and Joan Stein

Auditions March 27, 28 (Roles for at least eight women and one man)

• “Singing in the Rain, Junior” by Camden, Green & Freed

Auditions May 15, 16 (Roles for six girls, six boys and at least eight ensemble singers and dancers)