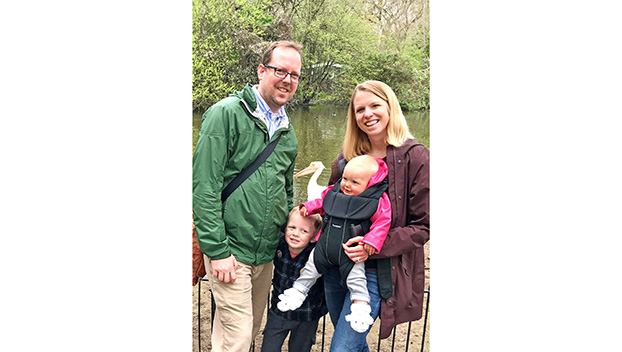 Pictured are Jason Swanson and his wife Ellen Swanson with their children, Peter and Eloise, in St. James’s Park in London, England. - Photo submitted

“Transformative Travels: Exploring London” is an independent TV production currently being aired on KET, or Kentucky Educational Television, with ties to Danville and Centre College.

It’s a production headlined by Jason Swanson, a Danville resident and associate professor at the University of Kentucky within the university’s hospitality management and tourism program.

Three former UK students are featured in the show as they study abroad for the spring 2019 semester in London, England. It also features Jason’s wife, Centre College associate professor of mathematics Ellen Swanson, who was also doing a study abroad program in London at the time, and a few former Centre students. The Swansons’ young children, Peter and Eloise, also make appearances. Peter was 4 at the time, and Eloise was 6 months old. 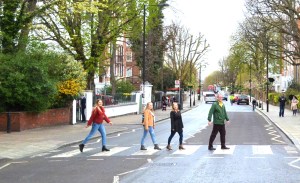 The first episode of the show aired Sunday. There are two more episodes: one June 13 at 2:30 p.m., and one June 20 at the same time. Though the show mainly features student experiences, Jason said he and Ellen also share time with their children on their international travels.

“We talk a little bit about what that’s like, taking your kids traveling, little kids like that, and some of the impact that we hope that it has on them in terms of seeing these college students as role models, and also an opportunity for the college students to see us as a family to say life doesn’t stop when you have kids,” Jason said. “You can still do stuff if you can be creative and try to make it work.”

Watch the first episode of the series on Youtube below.

Wilson Blakeman is one of the former Centre students interviewed in the second episode of the show, and several former Centre students make appearances throughout the show, including one Harrodsburg native. Blakeman graduated from Centre in May 2020 and is from Bowling Green. In London, he took courses in Cryptography, British Theatre, British Museums, and The Romance of King Arthur.

“As far as my contributions to the project, I gave the interview, took some photos on Abbey Road, and filmed a couple of scenic shots for Dr. Swanson and his students,” he said in an email.

He said he helped film in some areas of the city he “would not have made it to” himself.

When it comes to how Jason got started on the project, he had worked previously with a Lexington-based production crew to make a previous “Transformative Travels” season traveling around Kentucky, called “Transformative Travel: Exploring Kentucky.” It was six episodes featuring six days of travel and showed on KET in 2018.

“The idea of that was you don’t have to go far to have some sort of meaningful experience,” he said.

For the London experience, Ellen had gotten the opportunity to co-lead a semester-long study abroad program with Centre there, and Jason said that meant he had to figure out how to go, too, since they have young children. He eventually was able to lead a semester-long program in London with UK, and thus “Transformative Travels: Exploring London” came to be. For the classes offered for the three UK students, he had them contribute with their assignments to the production by design. One assignment was that each week, they submitted two to three video clips of what they were doing in London. And since they were there a semester, they not only explored London but several parts of Europe, and footage is included in the episodes. For example, one student visited a fashion museum in Venice, Italy.

Since the “Transformative Travels: Exploring London” season was filmed over the course of an academic semester, it consists of three episodes highlighting each of the UK students’ travel experiences: Arizzona Albright, Catie Archambeau and Emma Rosenzweig.

“The videos gave them the opportunity to reflect on their activities, and I think that was important because we may be taking videos of ourselves and our experiences, but we don’t always stop to think about what those mean,” Jason said. “So I think the class, or the assignment forced them to do that so they were a little more thoughtful about what their experience was.”

Watch the trailer for “Transformative Travels: Exploring London” on YouTube below.

Summer fun continues at the library