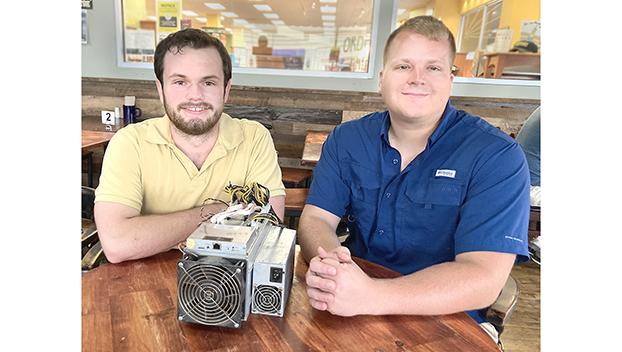 Business partners Griffin Ross, left, and Tyler Montgomery own Montgomery & Ross Integrated Strategies, a bitcoin mining business in Danville. The machine is just one of 30 bitcoin mining machines they have in operation. -Photo by Robin Hart

Two young entrepreneurs from Danville have invested in the cryptocurrency mining industry and are taking the step from being hobbyists to amateur bitcoin miners.

Business partners Tyler Montgomery and Griffin Ross, who both graduated from Danville High School in 2015, have careers in Lexington. Montgomery is a general contractor and Ross is a bartender. And now they’re also dabbling in bitcoin mining under the name Ross & Montgomery Integrated Strategies in Danville.

Bitcoin isn’t a physical form of money such as coins or paper bills. It can’t be held or stashed in a piggy bank. And it isn’t dug out of the ground.

“Bitcoin is a digital currency. It’s money, but it’s not backed by traditional means” such as gold and banks, Montgomery explained.

“Bitcoin works off of a decentralized program of people (bitcoin miners) running these machines all over the world,” Ross said. 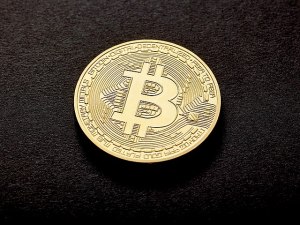 Crypto (short for cryptocurrency/digital currency) was developed as an international alternative to government-backed or fiat currency. There is a finite number of bitcoin in the market, Montgomery said. Bitcoin can be purchased (invested in) with traditional currency. It can also be used as money at certain stores and banks.

Ross said mining bitcoin is comparable to buying and selling stock in the stock market.

Montgomery said, “That’s kind of the allure of it. Today, if you buy $100 worth of bitcoin, tomorrow it might be worth $130. But it fluctuates so much.”

Bitcoin is tied to “blockchain technology,” Ross said. “All of the (bitcoin) transactions come in and they’re sorted in the blockchain.”

For example, when Sally sends Joe bitcoin currency, and Joe sends bitcoin to John, and John sends them to Mary, the transactions are recorded in order and forms a chain. The chain is packed into blocks, Ross said.

“And then the blocks are sent out into the network and they’re processed by miners.”

Essentially, the miners keep track “of who has what coins.” Once a person uses a particular bitcoin or fraction of a coin, they can’t use it again.

“Miners verify the transaction that has occurred. That way the person who originally had the coin and is sending it, can’t use it multiple times and be fraudulent,” Ross said.

It’s like you can’t spend the same dollar bill multiple times because someone else has it, he explained.

Montgomery said bitcoin and mining consists of a very complicated series of numbers, algorithms, and keys that takes a massive number of computers worldwide to run and prevent counterfeit bitcoin.

“The machines crunch the numbers. They’re doing the job that banks do, of the U.S. dollar, of keeping track of who has the money and where the money is,” Montgomery said.

“You could say the network is given value by the energy and the people that run the farms (or the mines) that have bought all of the computers to run the network,” Ross explained. 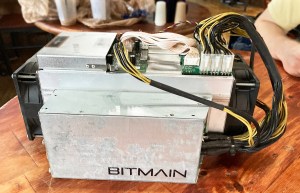 One bitcoin mining machine uses about $100 worth of electricity per month in Lexington. -Photo by Robin Hart

After watching how it works, and learning more about how the system can pay off, the men researched and eventually found 30 more machines for sale.

“We honestly lucked into this,” Ross said.

When they contacted the seller of their last batch of machines, which were listed at a good price at around $500 each, they were very surprised that the seller not only was in America, but he was located in Somerset, Kentucky.

Ross said the seller started with the machines, but had recently purchased “two semi trucks full of them directly from China.”

The machines they use “were built specifically to mine the SHA 256 algorithm, which is the bitcoin algorithm. The (micro) chips on the boards, all they do is hash this algorithm as fast as it can,” Ross said.

Montgomery said they are working in a group with other bitcoin miners, called a mining pool.

“The collective mining pool may or may not win the coin, but they still pay us, essentially, for our computing power.”

“It’s very rare for a single person with a single computer to do that. That’s why there’s multiple of these machines. There are farms out there with thousands and thousands of these,” Montgomery added.

Ross saw an online advertisement from someone who wanted to buy “10,000 of these things,” he said as he patted one of their machines.

They now own 31 machines, but have the ability to power 50.

“We’re a small scale mining operation,” Ross said. “We are teeny, tiny fish in the ocean of bitcoin mining.”

Montgomery and Ross said they are not mining bitcoin at the moment though.

“We had to unplug everything because we’re no longer making enough money to justify using the electricity to run the machines,” he said.

Each machine uses roughly $100 of electricity per month.

Early in May when they purchased most of the machines, Montgomery said they paid for themselves within three months, plus paid for the electricity they used, and the men still received about a $600 profit.

But not at the present time.

The value of bitcoin took about a 50% drop recently, Ross explained. “But we’re not too worried. “We have to take a few steps back, rethink things and figure out where we can get some more (energy) efficient units,” Ross said.

“That’s the number one concern right now with the whole bitcoin network. It’s the energy they use,” he added.

Montgomery and Ross admitted they still have a lot to learn about the intricate workings of the whole cryptocurrency business.

Ross said, “I don’t understand it very well myself.” Holding up two fingers about an inch apart, he added that if bitcoin mining industry was an iceberg, “I understand about this much.”

If you’re not familiar with cryptocurrency and bitcoin mining, here is a brief explanation to better understand Montgomery and Ross’s new business venture:

According to an article written by Jake Frankenfield on the website Investopedia, bitcoin is the world’s largest digital currency (cryptocurrency) that was created in January 2009. And unlike government-issued money, “bitcoin is created, distributed, traded, and stored with the use of a decentralized ledger system, known as a blockchain.”

“Bitcoin is one of the first digital currencies to use peer-to-peer technology to facilitate instant payments. The independent individuals and companies who own the governing computing power and participate in the bitcoin network — bitcoin “miners” — are in charge of processing the transactions on the blockchain and are motivated by rewards (the release of new bitcoin) and transaction fees paid in bitcoin.”

“Generally, mining requires the solving of computationally difficult puzzles in order to discover a new block, which is added to the blockchain,” Frankenfield wrote.

“A variety of hardware can be used to mine bitcoin. However, some yield higher rewards than others. Certain computer chips, called Application-Specific Integrated Circuits (ASIC), and more advanced processing units, like Graphic Processing Units (GPUs), can achieve more rewards. These elaborate mining processors are known as “mining rigs.”

Frankenfield wrote, “Bitcoin mining is necessary to maintain the ledger of transactions upon which bitcoin is based. Miners have become very sophisticated … using complex machinery to speed up mining operations.”