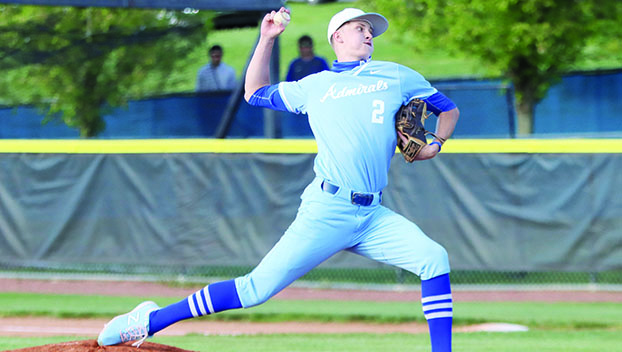 Christian Howe of Danville delivers a pitch. He allowed two first-inning runs, then settled in to retire 12 of the next 13 batters Saturday in the KHSAA state baseball tournament.

LEXINGTON — Things went pretty much according to plan for Danville in its first state tournament game.

The Admirals faced a quality opponent in unfamiliar surroundings in their semi-state game Saturday in the KHSAA State Baseball Tournament, but they settled in and stuck to their plan to defeat Beechwood 6-4 at Kentucky Proud Park.

They turned line drives into long doubles and errors into runs and limited the damage done by the Tigers’ offense to make their deepest push into the state playoffs.

“It was basically how we drew it up,” Danville coach Paul Morse said.

Danville (39-3) advances to a quarterfinal against Lafayette at 8:30 p.m. Wednesday at Lexington Legends Ballpark.

This is uncharted territory for the Admirals, who have reached the round of eight for the first time in school history. Their three previous regional championships were followed by a loss to Lafayette in a 1989 sectional semifinal — Morse was the losing pitcher — and 2-0 sweeps by Lexington Catholic in best-of-three semi-state series in 2006 and ’09.

Playing on an artificial surface in a spacious ballpark, the Admirals didn’t seem quite themselves as they fell behind Beechwood (31-7) in the first inning. But they didn’t seem rattled, either.

“We came out in the first inning … and we were throwing balls around everywhere. … But after a while we settled in and kind of figured it out,” Danville pitcher Christian Howe said.

A handful of players slipped on turf that was still damp from the previous day’s rain, both in the field and on the basepaths.

“It’s the first time we’ve been on turf, but we tried to practice on turf fields anywhere we could find them this week,” Howe said. “It got us a few times, but it didn’t hurt us too bad.”

The home run-happy Admirals, who have gone deep more often this season than all but a handful of teams whose records have been recorded across the nation, adapted their offense to a ballpark that extends deeper down the left-field line than at any point along the outfield fence in their own park.

“People can’t give excuses about our short park, because obviously you saw today we hit some pretty good balls,” said second baseman Logan Smothers, one of two Admirals with two hits.

Six of their nine hits were doubles, hit by six different players.

“They had a really good pitcher today, but that adrenaline was going, and we’re all so talented that we were just hunting fastballs and driving them,” Smothers said.

They drove the ball into the gaps, over outfielders’ heads and down the foul lines.

“We wanted to make sure we weren’t coming up here and hitting a bunch of lazy fly balls. We talked all this week about driving the ball, trying to knock the outfield fence down with line drives, hitting those balls in the gaps and coming out running. And if you do that, balls are going to carry no matter what size park you’re playing in.”

Meanwhile, Danville pitchers Christian Howe and Brady Baxter were effective if not outstanding. Howe, a University of Kentucky signee who was pitching at the park that will be his home next season, allowed three runs on three hits in six innings to improve to 9-1. Baxter allowed a run in the seventh before getting the final out for his second save.

“We got through with Christian and had a couple of guys there in the middle to come in for relief if we needed it and then got to B.B. at the end,” Morse said.

A two-out infield single by Ethan Wood, the second of his two hits, and a second Beechwood error in the fourth inning produced the two runs that put Danville on top.

Wood’s single off the glove of Beechwood pitcher Mitchell Berger drove in K.J. Stanfield, who had doubled, and a throwing error on the play brought in Jaden Larmour, who reached on catcher’s interference.

Up 4-3, the Admirals added insurance runs with a two-out double by Logan Smothers in the sixth and a one-out double by Preston Barnes in the seventh.

In the bottom of the seventh, Baxter retired the first two batters before hitting No. 9 batter Jacob Norton with a pitch, then giving up a double to Cameron Boyd that brought Norton home. He got the final out on a deep fly ball secured by center fielder Sam Gibson.

Howe allowed two first-inning runs in a first inning extended by Danville’s only error, then settled in to retire 12 of the next 13 batters.

“He’ll be the first to tell you he didn’t have great stuff today,” Morse said. “That’s maybe the worst stuff he’s had all year. But he battled and competed, just trying to find feel for what offspeed pitch he’d have today, and that’s what great players do.”

Boyd hit a home run to left-center field that gave the Tigers a 3-2 lead before the Admirals answered with two runs in the top of the fourth.

Danville missed a scoring chance in the first inning when Larmour and Wood led off the game with back-to-back doubles but scored twice in the second when Bryson Young was hit by a pitch, Smothers singled and both came around on a throwing error on a ground ball by Larmour.

“After we scored those two runs in the second inning, we were fine, we were fired up,” Smothers said.

Only one of the five runs allowed by Beechwood’s Berger was earned. Berger, who fell to 7-1, gave up six hits and two walks in five innings.

With their 17th consecutive victory, the Admirals moved into the top 10 on the list of Kentucky teams with the most wins in a single season. Only five teams have won 40 or more games, and the state record is 41 set by Paul Dunbar in 2003.

Danville defeated the Generals 7-0 on May 1 in the Admirals’ invitational tournament. Ethan Wood homered twice in that game to lead a nine-hit attack, and Smothers and Wood combined on a five-hit shutout that included 11 strikeouts.